Arjen Robben ruled out for six weeks with knee injury

Arjen Robben suffered the cut following a tackle with Augsburg's custodian Marwin Hitz inside the box. 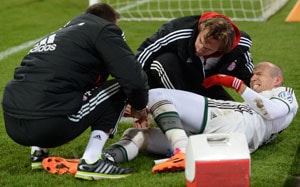 Dutchman Arjen Robben had been ruled out of action for roughly six weeks owing to a cut in his right knee, the Bavarians announced. The German giants beat Augsburg 2-0 at the DFB Cup, where Robben got a deep flesh wound in his right knee.

"Arjen Robben has sustained a deep laceration extending into the knee joint. The impact of one of the opposing player's studs on the thighbone in the right leg has caused extensive haemorrhaging," club doctor Hans-Wilhelm Mueller-Wohlfahrt told the club's official homepage.

"Obviously I'm bitterly disappointed. I've been in such good form and really looking forward to every game with our team, but now this has happened," Robben stated.

Bayern's director of sport Matthias Sammer added: "Arjen was basically in the form of his life and has recently had a decisive role in so many of our games. Losing him now is a bitter blow."

The winger will miss the Bundesliga matches against Bremen and Hamburg. In addition, he will have to stand on the sidelines when his team encounters Manchester City in the UEFA Champions League.

Comments
Topics mentioned in this article
Football Bayern Munchen Borussia Dortmund Shinji Okazaki Arjen Robben
Get the latest updates on ICC T20 Worldcup 2022, check out the Schedule and Live Score. Like us on Facebook or follow us on Twitter for more sports updates. You can also download the NDTV Cricket app for Android or iOS.