Arshavin was one of the stars of Zenit's 2008 UEFA Cup-winning side and Russia's Euro 2008 campaign. He then moved to Arsenal but his career failed to flourish despite a promising start and he spent most of the time on the bench. 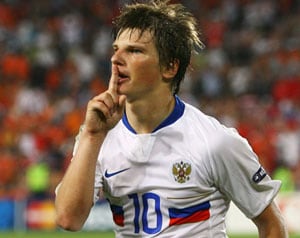 The reported return of Arshavin to the club that launched his career comes as one of Zenit's most experienced players, current Russian skipper Igor Denisov, is set to leave for big spenders Anzhi Makhachkala.

Arshavin was in Saint Petersburg on Friday and held talks with Zenit manager Luciano Spalletti and also Alexei Miller, the chief executive of the club's owner, Russian gas giant Gazprom.

The Sports Express daily reported on its website that the main conditions of Arshavin's contract had been agreed and the deal would be announced imminently.

The Interfax news agency said Arshavin nodded when asked if he was returning to Zenit as he left the meeting with Miller but gave no further comment.

Arshavin was one of the stars of Zenit's 2008 UEFA Cup-winning side and Russia's Euro 2008 campaign. He then moved to Arsenal but his career failed to flourish despite a promising start and he spent most of the time on the bench.

Out of contract with Arsenal this summer, Arshavin, 32, was briefly loaned to Zenit by the London side during the second half of the 2011/12 season.

Arshavin became a hero for Russian fans after the Euro 2008 campaign for his scintillating runs and clinical finishing. But after Russia's humiliating Euro 2012 exit he was at the centre of controversy after being caught on a mobile phone camera criticising the Russian fans.

Meanwhile, the Sport Express and Sovietsky Sport newspapers said both teams had agreed on Denisov's move to Anzhi and that the final contract would be signed in the next few days.

The move of Denisov, 29, to the ambitious outfit from the northern Caucasus ends a glittering career with Zenit that he began as a teenager in 2001 and saw him win the UEFA Cup in 2008 as well as three Russian titles.

Denisov has 37 international caps and has been the captain of the national side under Fabio Capello since 2012.

However Denisov's love affair with Zenit went sour after the arrival of Brazilian star Hulk as he led an open rebellion about the foreign player's huge wage packet and was dogged by controversy over training ground bust-ups.

Comments
Topics mentioned in this article
Football Arsenal Anzhi Makhachkala Zenit St. Petersburg Andrei Arshavin Igor Denisov
Get the latest updates on SA vs IND 2021-22, check out the Schedule and Live Score . Like us on Facebook or follow us on Twitter for more sports updates. You can also download the NDTV Cricket app for Android or iOS.