Ghana midfield star Andre Ayew could miss the Africa Cup of Nations in South Africa this month after injuring a hamstring while training with French club Marseille. 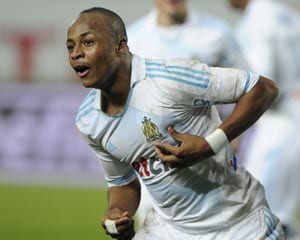 Ghana midfield star Andre Ayew could miss the Africa Cup of Nations in South Africa this month after injuring a hamstring while training with French club Marseille.

Although the seriousness of the problem is not yet known, Ghana officials are insisting the 2011 BBC African Footballer of the Year joins a training camp beginning this weekend in Abu Dhabi.

"We have written to Marseille telling them to release the player as we want to check him out ourselves," a spokesman for the 'Black Stars' told reporters in Accra.

Ghana are scheduled to play warm-up matches against Egypt and Tunisia in the United Arab Emirates before heading for Port Elizabeth and Group B fixtures against the Democratic Republic of Congo, Mali and Niger.

The loss of Ayew -- a son of former African Footballer of the Year Abedi 'Pele' Ayew -- would be a massive blow as Ghana seek a first Cup of Nations title since defeating hosts Libya on penalties in Tripoli 31 years ago.

Ayew was part of the 'Black Stars' squad that flopped at the 2012 tournament in Gabon and Equatorial Guinea, suffering a surprise semi-final loss to Zambia and failing again in a play-off against Mali for third place.

Ghana coach Kwesi Appiah, part of the 1982 Cup-winning team, has already suffered a blow with striker Yahaya Mohammed forced to withdraw from the 26-strong provisional squad due to a groin injury.

Appiah said leading Ghana Premier League scorer Mohammed would not be replaced, leaving the coach to drop two players before the midnight GMT deadline on January 9 for final 23-man squads.

Meanwhile, South Africa coach Gordon Igesund says supporters should not read too much into friendlies against Norway in Cape Town next Tuesday and fellow qualifiers Algeria in Soweto four days later.

"Results are always important because they breed confidence, but I might not play our strongest team in either match as we are still looking at what combinations work best," Igesund told reporters in Cape Town.

South Africa get the Cup of Nations underway on January 19 when they face debutants Cape Verde Islands at the 90,000-seat Soccer City stadium in Soweto, with Angola and Morocco featuring in the other half of a double-header.

Comments
Topics mentioned in this article
Football Marseille Ghana Obafemi Martins
Get the latest updates on ICC T20 Worldcup 2022 and CWG 2022 check out the Schedule, Live Score and Medals Tally. Like us on Facebook or follow us on Twitter for more sports updates. You can also download the NDTV Cricket app for Android or iOS.