A fleet of Afghan Parliamentarians arrived in the afternoon to cheer their team and one of them even went onto the extent of announcing an apartment and USD 25,000 each for the whole squad if they happen to win the match. 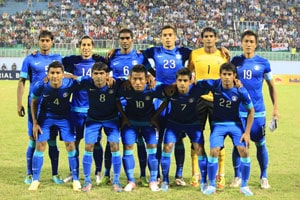 India's bid to win a hat-trick of SAFF Football Championship titles went up in smoke on Wednesday as they lost 0-2 to Afghanistan in the final here.

The Afghans, who won their maiden SAFF trophy exacted a sweet revenge for their humiliating 0-4 loss against the same opponents in New Delhi two years back. The winners were helped by strikes from Mustafa Azadzoy (8th minute) and Sanjar Ahmadi (63rd minute). (Afghanistan wins first international football title)

India coach Wim Koevermans's gamble of leaving out regular captain Sunil Chhetri from the starting XI didn't exactly pay off although the efforts from Robin Singh and Jeje Lalpeklhua were praiseworthy. It was their inexperience on big occasion that cost India dearly as they fumbled repeatedly on the opposition's attacking third.

For Afghanistan, it was a moment they had waited for two years having found the defeat in Delhi a hard to swallow.

A fleet of Afghan Parliamentarians arrived in the afternoon to cheer their team and one of them even went onto the extent of announcing an apartment and USD 25,000 each for the whole squad if they happen to win the match.

Whether the announcement egged them is hard to know but they certainly played to their plan as they were able to keep the Indian team at bay despite a wave of attacks. Both the strikes came off counter-attacks and after each goal, the 'Men In Red' tightened their defence.

Just like their semi-final match, Afghanistan got the much-needed goal as early as the eighth minute when right wing back Mustafa Hadid beat opposition left-back Syed Rahim Nabi as he got a lot of open space down wide right to enter the penalty box and passed it on to Belal Arezo. Belal managed to hoodwink stopper back Arnab Mondal with a pass for Mustafa Azadzoy to slot it past Subrata Paul.

India played better after conceding the goal as there were a flurry of attacks with some fine build-ups with assistance from Mehtab Hossain in the central midfield and Farncisco Fernandes down right.

In the 19th minute, Mehtab provided a long ball which saw the burly Robin trying to hustle past a defender but Afghan custodian Masur Fagiryar came out of his charge to avert the danger.

In the 26th minute, there was another chance that went abegging when Robin passed it to Francis who kept a through ball for Arata whose placement wasn't good enough to beat the diving Afghan goalie.

In the 35th minute, Mehtab's pile driver was brilliantly saved by Fagiryar and Jeje's shot from the rebound was saved in the goalline by rival captain Fakhruddin Amiri.

After the change of ends, Jeje almost singlehandedly bulldozed into the Afghan territory though the left-flank but couldn't keep it in play.

Chhetri finally came in th 60th minute and almost immediately scored as he played a one-two with Francisco before his feeble shot was saved by the goalie.

However, in the counter, Afghans struck a telling blow scoring the second goal in the 63rd minute when Belal raced past Arnab and Gourmangi with only Paul to beat. His placement was well intercepted by Paul but Sanjar Ahmadi lobbed it and the goalkeeper failed in his bid to tip it over cross-bar.

Down 0-2, Chhetri tried a long ranger in the 65th minute which hit the horizontal, but the Indian team seemed to fizzle out with the passage of time.

Comments
Topics mentioned in this article
Football India Cricket Team Afghanistan
Get the latest updates on SA vs IND 2021-22, check out the Schedule and Live Score . Like us on Facebook or follow us on Twitter for more sports updates. You can also download the NDTV Cricket app for Android or iOS.