Carlos Bacca and M'baye Niang scored a goal each to help AC Milan beat Carpi 2-1 in their Italian Cup clash. 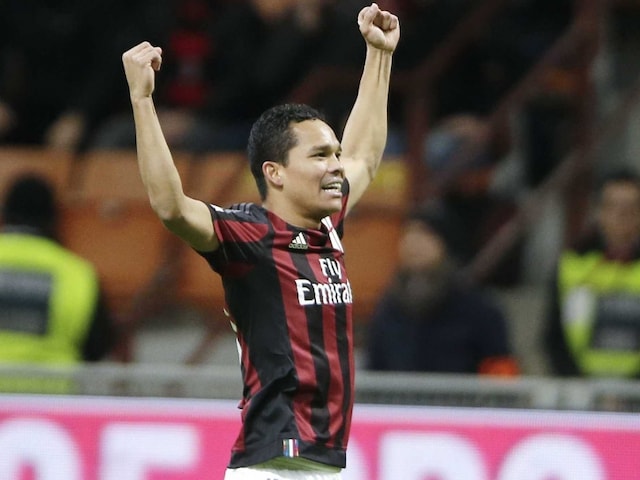 AC Milan became the first team into the Italian Cup semi-finals after holding on for a 2-1 win over Carpi at the San Siro on Wednesday. (Click here for latest Football stories)

The seven-time European champions, who have fallen on hard times in recent seasons, took a two-goal half-time lead through Carlos Bacca and M'baye Niang but Matteo Mancosu's strike early in the second period kept things interesting until the final whistle.

In truth, Milan should have won by more but with just one goal in it remained vulnerable.

Milan were well on top in the first period, taking the lead on 14 minutes when Bacca finished from Japanese playmaker Keisuke Honda's pass to notch his 10th goal of the season.

Slovak Juraj Kucka should have doubled the advantage five minutes later but Serbian goalkeeper Zejlko Brkic, who had earlier parried a Honda free-kick, made a wonder save to deny him.

Bacca turned provider just before the half-hour mark as he teed up M'baye Niang to fire home the second.

The hosts appeared to be in cruise control but five minutes into the second period, Kevin Lasagna played Mancosu in one-on-one with goalkeeper Christian Abbiati and the forward finished with aplomb.

Kucka could have extended Milan's advantage but again he came up short, firing off target just past the hour mark.

Milan kept wasting chances to kill the game as Giacomo Bonaventura blazed wastefully off target late on while Honda's shot was deflected behind for a corner with Brkic AWOL.

But the rossoneri held on to reach the last four.

The three other quarter-finals take place next week with Napoli hosting Inter Milan and Juventus travelling to Lazio while there will be one lower league outfit in the semi-finals as second division Spezia host third tier Alessandria.

Comments
Topics mentioned in this article
Carlos Bacca AC Milan Football
Get the latest Cricket news, check out the India cricket schedule, Cricket live score . Like us on Facebook or follow us on Twitter for more sports updates. You can also download the NDTV Cricket app for Android or iOS.