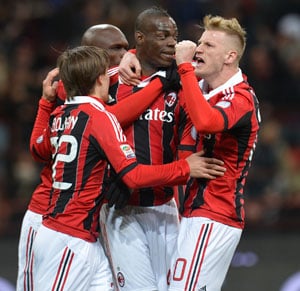 AC Milan vice-president Adriano Galliani hit out at the imposition of stadium bans in Italy's Serie A as racism reared its ugly head once more in the country's top flight.

Milan went on to lose 3-2 and the Rossoneri's woes -- they are currently 12th, 13 points behind leaders Roma -- deepened when disciplinary officials slapped a one-match stadium ban on the club.

In accordance with UEFA rules which have been adopted and interpreted by the Italian football federation (FIGC), Milan will now play their next game, against Udinese in a little under a fortnight, behind closed doors.

The sanction, handed down after the chanting was deemed by FIGC disciplinary chiefs to fall under "territorial discrimination", has been employed under various guises this season.

Both Roma and Lazio, as well as Inter and Milan, have been forced to close sections of their grounds following similar incidents.

Milan were at the centre of a racism storm last season involving former forward Kevin-Prince Boateng, who walked off the pitch while being subjected to abuse during a friendly against a lower league side.

But Galliani, whose club has several black players on its books -- including Ghanaian Sulley Muntari and Italy striker Mario Balotelli -- called on the authorities to find an alternative sanction.

"I'm fully aware that racism is a major problem, it's a a worldwide one," Galliani said. "But territorial discrimination is something different.

"We need to abolish the rule. Even all the (club) presidents agree on that and I've called (FIGC president) Giancarlo Abete to tell him that."

Galliani is not alone in criticising the law, Milan were also punished for their fans chanting anti Napoli chants, something considered quite normal for fans all round the world to have a go at their rivals.

Inter Milan ultras later on Tuesday went further than Galliani and even asked the ultras from bitter rivals AC Milan as well as other Serie A sides to join with them in a day of action, making chants which would result in punishments that would see all stadia hosting matches without any spectators

Galliani claimed the alleged incident involving Milan fans with the Juventus duo had been blown out of proportion and the FIGC's stance would only hit embattled Italian football harder.

"No one even heard the chants. No television channels or newspapers wrote about it. I was at the stadium and all I could hear were chants targeting Mario Balotelli," he added.

"I don't understand why Italy is the only one (league) applying this rule. Why close a stadium when they are already empty?"

Since the Boateng incident last year, several clubs have launched offensives to combat racism from within their own fan base. However in some clubs, the message is not getting through.

Days after the tragic drowning of hundreds of migrants off the coast of Lampedusa, the notorious fans of promoted Verona were heard singing during the minute's silence observed by all clubs prior to kick-off away to Bologna.

Italian football's ills, nevertheless, are being played out against a political backdrop in which overt racism has become the norm.

The country's only black minister, Cecilia Kyenge, has been subject to racist abuse on several occasions by fellow politicians. One senator from the nationalist Northern League, Roberto Calderoli, publicly compared her to an orang-utan.

While top players in Serie A regularly hit out at racist fans, Italy's national coach Cesare Prandelli says only a cultural shift among the population would change behaviour.

Claiming he does not "believe Italy is a racist country", Prandelli nevertheless told AFP: "People have to speak out when a national anthem is jeered or when they hear other people being racist."

Comments
Topics mentioned in this article
AC Milan Sepp Blatter Football Manchester United Javier Pastore
Get the latest Cricket news, check out the India cricket schedule, Cricket live score . Like us on Facebook or follow us on Twitter for more sports updates. You can also download the NDTV Cricket app for Android or iOS.