Brazil seek to become the first team through to the World Cup semi-finals on Friday, while Argentina could set up a blockbuster all-South American clash if they get past the Netherlands 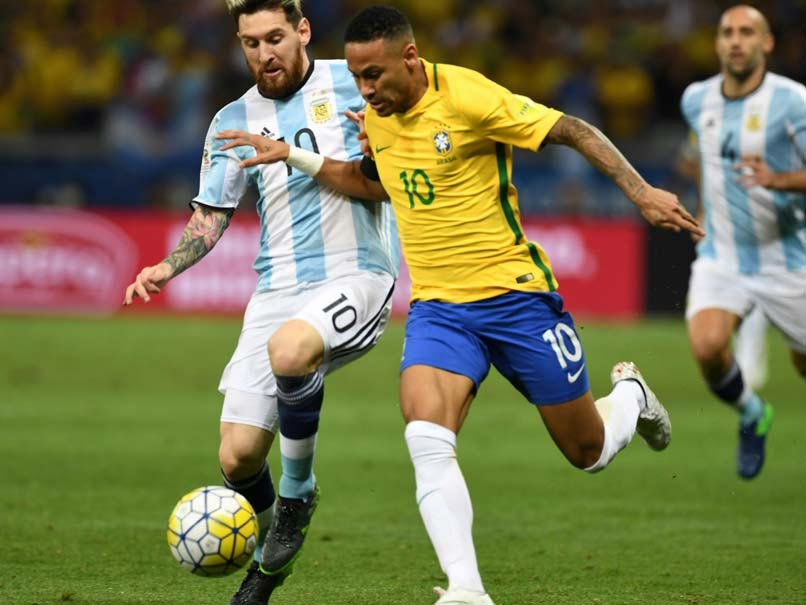 Brazil's Neymar and Argentina's Lionel Messi are teammates at PSG in France.© AFP

Brazil seek to become the first team through to the World Cup semi-finals on Friday, while Argentina could set up a blockbuster all-South American clash if they get past the Netherlands. After three weeks of pulsating action, just eight teams are left standing as the 32-nation tournament heads into the final rounds of the knockout competition after a two-day break. Five-time champions Brazil kick off the quarter-finals against surprise 2018 runners-up Croatia, with Neymar fit and firing again after an ankle injury he suffered in the opening game.

"I'll be doing everything that I can to win with the Brazilian national team. That's our mission and our dream," said Neymar.

"We're getting ever closer, we've got another step to go now."

Croatia are a much-changed team from the one that reached the final four years ago, but 37-year-old Luka Modric remains the player that makes them tick.

"I agree that we did a great thing by getting to the quarter-finals but regardless of that we would like to do more," said Modric, who will come up against his Real Madrid teammates Vinicius Junior, Rodrygo and Eder Militao in the match at Education City Stadium.

"We know that the greatest match is ahead of us. Brazil are always favourites. We have to be ourselves."

Seven-time Ballon d'Or winner Lionel Messi is hoping to finally end his wait for a World Cup title with Argentina, after losing the final to Germany in extra time eight years ago.

The Copa America holders go up against the Netherlands in Friday's second quarter-final at Lusail Stadium, the venue for the December 18 final.

The two countries have met five previous times at the World Cup, including in the 1978 final, which Argentina won 3-1 after extra time. Argentina have never beaten the Dutch in 90 minutes.

It is a repeat of their 2014 semi-final clash in Brazil, where the South Americans won on penalties following a 0-0 draw after 120 minutes.

"In 2014 I was there and things ended slightly differently (to how we wanted) but I'd like to change that now," Dutch forward Memphis Depay said at a pre-match press conference.

After Argentina's shock loss to Saudi Arabia in their first match, Messi has dazzled in Qatar and the Dutch will have to nullify his effect on the game.

"We're not going to reveal our tactics to you (about stopping Messi). It would be pretty stupid to reveal your own tactics," coach Louis van Gaal told reporters.

"Messi is the most dangerous creative player, he is able to create a lot and to score goals himself. But when they lose the ball he doesn't participate much, this gives us chances," he said.

England received a boost ahead of Saturday's showdown with reigning champions France as Declan Rice returned to training following illness.

Raheem Sterling is also set to rejoin the squad on Friday after spending time in England following a robbery at his home.

Portugal have denied reports that Cristiano Ronaldo threatened to walk away from the team after he was benched for their 6-1 rout of Switzerland in the last 16.

Ronaldo later took to social media to say that Portugal were "too united to be broken by outside forces" ahead of their game with first-time quarter-finalists Morocco.

The all-time top scorer in men's international football with 118 goals, Ronaldo was dropped in favour of Goncalo Ramos against Switzerland.

The 21-year-old Ramos justified Fernando Santos' bold decision by scoring a hat-trick and providing an assist on his full Portugal debut.

Morocco are trying to become the first African team to reach the last four at a World Cup.

Thousands of Morocco fans descended on the streets of Doha after the Atlas Lions knocked out Spain on penalties in the last 16.

"We succeeded in creating a family, and we feel there's a whole country behind us," said coach Walid Regragui.

"You feel this energy, it helps to perform like this."

He added: "I have an amazing group, they stick by what I say and do it. I don't know how far we'll go."

Lionel Messi Neymar FIFA World Cup 2022 Football
Get the latest updates on IPL Auction 2023 and check out  IPL 2023 and Live Cricket Score. Like us on Facebook or follow us on Twitter for more sports updates. You can also download the NDTV Cricket app for Android or iOS.