Toby Alderweireld gave Tottenham a late 2-1 win over Arsenal as Jose Mourinho's men climbed above their north London rivals, while Aston Villa boosted their Premier League survival hopes with a 2-0 victory against Crystal Palace on Sunday. 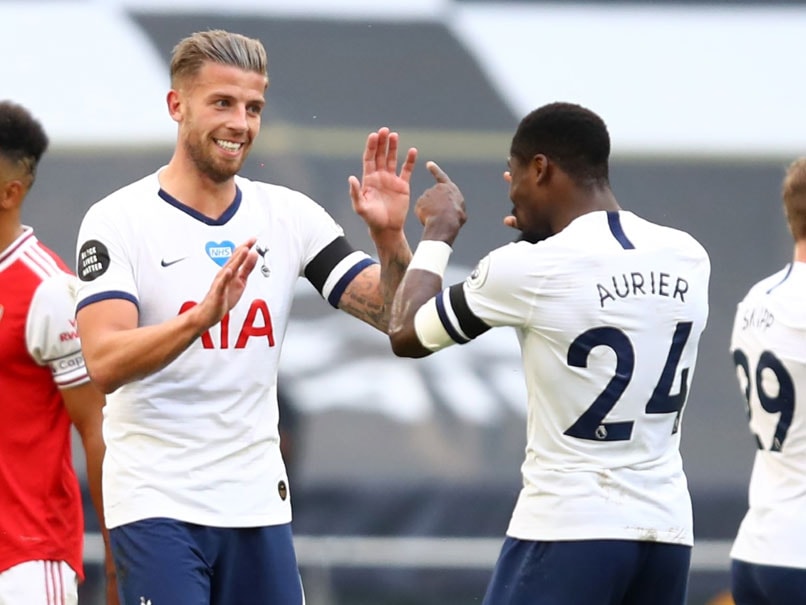 Toby Alderweireld scored the winner for Tottenham in the 81st minute against Arsenal.© AFP

Toby Alderweireld gave Tottenham a late 2-1 win over Arsenal as Jose Mourinho's menclimbed above their north London rivals, while Aston Villa boosted their Premier League survival hopes with a 2-0 victory against Crystal Palace on Sunday. Mourinho had endured a barrage of criticism as Tottenham slipped out of the race to qualify for the Champions League with just one win in three games. But thanks to Alderweireld's winner with nine minutes left, Tottenham took the local bragging rights and got back in contention for a place in next season's Europa League. Tottenham are eighth, two points above ninth placed Arsenal and two behind Sheffield United as they try to avoid missing out on European action for the first time since 2009-10.

In the first north London derby at the new Tottenham Hotspur Stadium, Alexandre Lacazette put Arsenal ahead in the 16th minute with a stunning strike.

The French striker dispossessed Serge Aurier outside the Spurs area before unleashing an unstoppable effort inside the top near corner of the goal.

It was the South Korean forward's 17th goal of the season and his first since the coronavirus hiatus.

Pierre-Emerick Aubameyang forced a fine save from Tottenham keeper Hugo Lloris in the second half, setting the stage for Alderweireld to win the game in the 82nd minute.

The Belgian defender rose above a cluster of Arsenal players to meet Son's corner and plant his header past Martinez.

At Villa Park, Dean Smith's side kicked off languishing seven points from safety, but Egypt winger Trezeguet scored twice to keep them in with a chance of avoiding relegation.

Villa's first win in 11 league games lifted them into 18th, within four points of fourth-from-bottom Watford with three games left.

Second-bottom Bournemouth will go one point above Villa if they beat Leicester later on Sunday.

Villa face Everton, Arsenal and West Ham in their last three matches as they battle to avoid an immediate return to the Championship.

"We said to the players, 'It's like a semi-final today'. It was the first leg of the semi-final we needed to go and win and we have done that with a good performance," Smith said.

"We need to give ourselves a big chance. Watford and West Ham play each other next so they both can't take three points but we have to concentrate on ourselves and hopefully get a result at Everton."

Villa snatched the lead in first half stoppage-time when Conor Hourihane's free-kick picked out Trezeguet, who side-footed home at the far post.

Palace striker Christian Benteke was sent off for violent conduct after the final whistle.

At Molineux, Wolves stayed in the Champions League hunt with a 3-0 win against woeful Everton.

Raul Jimenez's penalty and Leander Dendoncker's header a minute either side of half-time put the game out of Everton's reach.

Diogo Jota beat Jordan Pickford at his near post 16 minutes from time to round off another performance that will see the England number one scrutinised.

Victory lifts Nuno Espirito Santo's Wolves back ahead of Sheffield United into sixth and within four points of fourth-placed Leicester.

Fifth could also be good enough for the riches of Champions League football next season should Manchester City's appeal against a two-season ban from European competitions fail when the Court of Arbitration for Sport's verdict is revealed on Monday.

Crystal Palace
Get the latest updates on ICC T20 Worldcup 2022 and CWG 2022 check out the Schedule, Live Score and Medals Tally. Like us on Facebook or follow us on Twitter for more sports updates. You can also download the NDTV Cricket app for Android or iOS.