Pierre-Emerick Aubameyang struck twice as Arsenal climbed back into European contention with a 4-0 thrashing of Norwich on Wednesday. 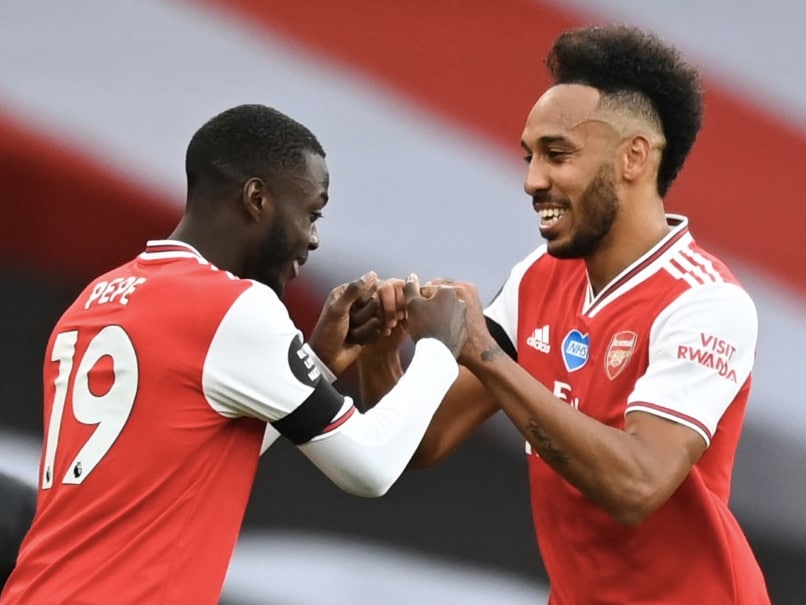 West Ham rocked Chelsea's top-four hopes and boosted their survival bid with a dramatic 3-2 win, while Pierre-Emerick Aubameyang struck twice as Arsenal climbed back into European contention with a 4-0 thrashing of Norwich on Wednesday. Chelsea were hoping to take advantage of third-placed Leicester's 2-1 defeat at Everton earlier in the day, but instead the Blues were beaten for the first time since the Premier League restart. West Ham were denied the opening goal at the London Stadium when VAR ruled Michail Antonio was offside as he lay on the ground while Tomas Soucek slotted home.

Antonio put West Ham in front in the 51st minute when he slid in to convert Jarrod Bowen's cross.

Willian's superb 70th-minute free-kick drew Chelsea level, but it was West Ham who broke away to win it in the 89th minute when substitute Andriy Yarmolenko finished a brilliant counter attack.

Chelsea are one point behind Leicester and only two ahead of Manchester United and Wolves as the race to qualify for the Champions League hots up with six games left.

"It's the story of our season. It's been a good season but there have been so many of these moments," Chelsea boss Frank Lampard said.

"I'm not happy with any of the goals. There were details in the game which we knew but we lost because we didn't get them right.

"It's why we are fighting for the top four and not first or second. We don't get things right as much as the big boys do."

At the Emirates Stadium, Aubameyang moved alongside Jamie Vardy as the Premier League's top scorer on 19 goals on a night of contrasting fortunes for the Golden Boot contenders.

Arsenal registered a third straight win to move up to seventh against a Norwich side ever more resigned to relegation.

Canaries keeper Tim Krul did his side no favours by gifting the opener to Aubameyang when he was caught trying to dribble past the Gabon international.

Aubameyang's first saw him reach 50 Premier League goals in 79 appearances -- making him the fastest Arsenal player to reach that landmark.

"A player that is able to score as many goals as he has done in that short space of time tells you everything about the importance that he has for us," said Arsenal boss Mikel Arteta.

Aubameyang turned provider for Granit Xhaka to make it 2-0 before half-time and was then handed another gift when Norwich striker Josip Drmic teed him up to make it 3-0.

Cedric Soares, signed from Southampton in January, made his debut one to remember with a long-range strike nine minutes from time to round off the scoring.

Leicester are headed in the opposite direction as their winless run since English football's restart from the coronavirus pandemic stretched to four games.

Kelechi Iheanacho's fortunate goal as the ball ricocheted in off his face reduced Leicester's arrears and they pressed hard for an equaliser in the closing stages.

"Our form hasn't been the best for a period now but we still have it in our hands to achieve what would be a dream for us, getting into the top four," said Leicester boss Brendan Rodgers.

At the bottom of the table, Bournemouth also suffered a huge blow in their battle to beat the drop with a humiliating 4-1 home defeat by Newcastle.

Dwight Gayle, Sean Longstaff, Miguel Almiron and Valentino Lazaro were on target for the Magpies.

Bournemouth remain in the bottom three and the margin of defeat could also prove costly as they drop below Aston Villa on goal difference into 19th.