Watford goalkeeper Ben Foster admitted the Hornets' confidence is "crazy low" as they slipped into the relegation zone with one game of the Premier League season to go. 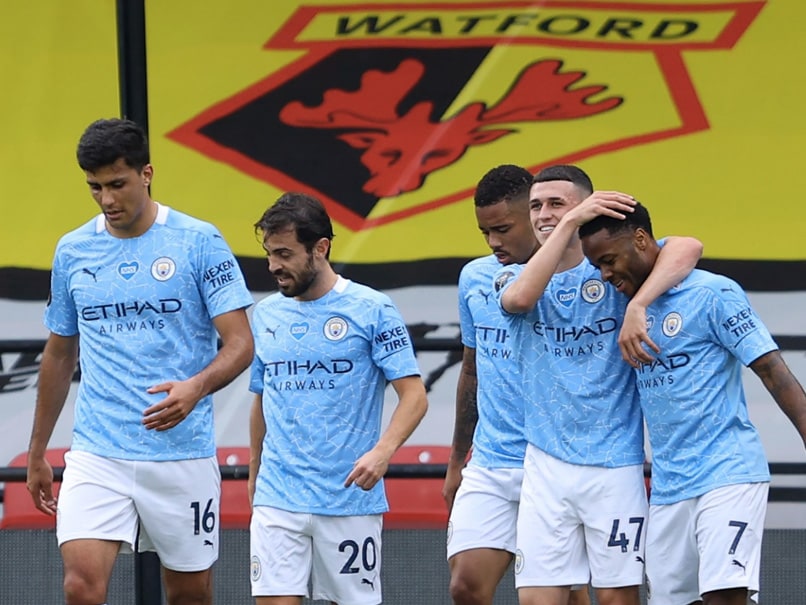 Watford goalkeeper Ben Foster admitted the Hornets' confidence is "crazy low" as they slipped into the relegation zone with one game of the Premier League season to go after being thrashed 4-0 at home by Manchester City on Tuesday. A change of management did little good after Watford became the first Premier League team to sack three managers in a season when Nigel Pearson departed on Sunday, as City bounced back from their weekend disappointment of losing an FA Cup semi-final to Arsenal.

Raheem Sterling scored twice in the first half before Phil Foden and Aymeric Laporte rounded off a comprehensive City win as Pep Guardiola's men won a fourth straight league game for the first time this season.

The margin of defeat could send Watford down come the final day of the season on Sunday as they dropped into the bottom three on goal difference after Aston Villa beat Arsenal 1-0.

Watford travel to Arsenal at the weekend, while Villa take on West Ham, who are now realistically safe due to a much superior goal difference.

"I don't think we helped ourselves, I don't think we did enough to do anything but what the result suggested to be honest," said Foster, who helped keep the score down with a string of saves.

"The confidence is so crazy, crazy low. I don't know why it should be, but you get into a state of trying to minimise as much damage as you can and it's a dangerous way to do things."

City will end the season in second place no matter what happens on the final day when they host already relegated Norwich, but Guardiola was pleased to get a reaction from a bitterly disappointing 2-0 defeat to his old assistant Mikel Arteta's Arsenal on Saturday.

"Watford were playing for a big issue but we were much more aggressive in our senses today," Guardiola said.

"We had to avoid the game we played against Arsenal, especially the first half. Whether you win or lose you have to go in the dressing room and say, 'OK, I've done everything'. This must always be happening at the big clubs and the last game we did not do it."

City have now beaten Watford by a combined score of 18-0 in their last three meetings after an 8-0 rout earlier in the season and 6-0 in last season's FA Cup final.

Hayden Mullins took charge of the hosts on a temporary basis for the second time this season and set up to frustrate the visitors by defending deep with little threat of ever testing City's soft spot at the heart of their defence.

However, there was little doubt over the outcome once Sterling controlled Kyle Walker's cross and fired powerfully into the top corner on 31 minutes.

Nine minutes later Sterling was taken down inside the area by Will Hughes and was given the chance to further his chances of chasing down Jamie Vardy for the golden boot as Kevin De Bruyne handed over responsibilities from the penalty spot.

Foster nearly made the Belgian regret that decision with a brilliant save from Sterling's penalty but the England international followed up to tap home his 19th Premier League goal of the season.

Foden added the third after Foster had again denied Sterling's initial effort before Laporte was left completely unmarked to head home De Bruyne's free-kick as the latter moved to within one of Thierry Henry's record of 20 Premier League assists in a season.

Manchester City English Premier League Football
Get the latest updates on Fifa Worldcup 2022 and check out  Fifa World Cup Schedule, Stats and Live Cricket Score. Like us on Facebook or follow us on Twitter for more sports updates. You can also download the NDTV Cricket app for Android or iOS.