Chelsea have secured the services of one of Europe's most coveted players with club director Marina Granovskaia hailing Timo Werner's "rare mix of being young and exciting and yet established and proven". 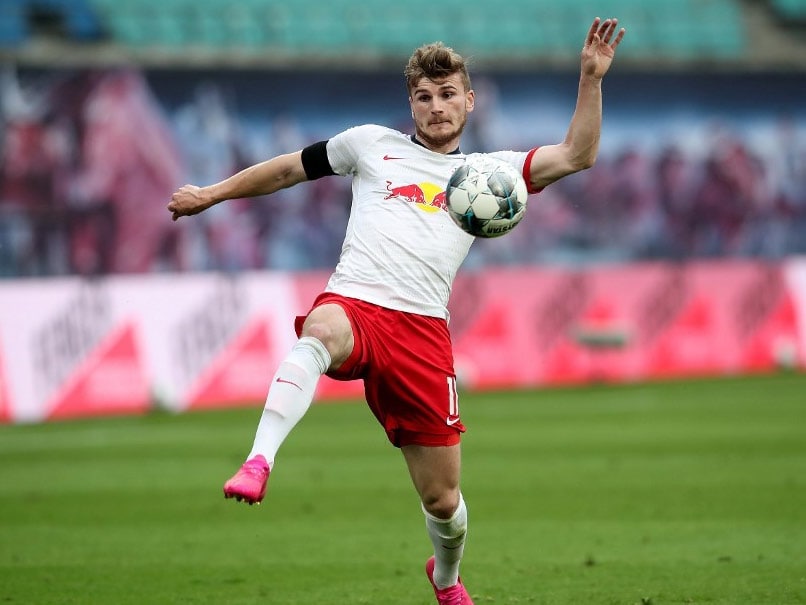 Timo Werner has scored 32 goals for RB Leipzig in all competitions this season.© AFP

Timo Werner's move from RB Leipzig to Chelsea seals the German's turbulent rise from national pariah to one of Europe's most feared forwards. Werner, who had a 60 million euro (53 million pounds, $67 million) release clause, will remain in Germany for the rest of the Bundesliga season. But for the coronavirus pandemic, Werner could have been lining up for Liverpool next season after the 24-year-old admitted to being flattered by Jurgen Klopp's interest.

However, the Premier League champions-in-waiting were not willing to pay Werner's release clause before it expired this month.

Chelsea have instead splashed out to add much-needed firepower to Frank Lampard's revamped attack next season despite financial uncertainty due to the virus.

Thanks to the backing of billionaire owner Roman Abramovich, Chelsea have secured the services of one of Europe's most coveted players with club director Marina Granovskaia hailing his "rare mix of being young and exciting and yet established and proven".

The Germany international has scored 32 goals for Leipzig in all competitions this season, including five in seven games since the Bundesliga returned last month.

Werner has already proved he can trouble Premier League defences. He played an influential role as Leipzig thumped Tottenham in the Champions League last-16, bagging the only goal of the first leg from the penalty spot.

Michael Ballack knows exactly what it takes to shine in the Premier League after leaving Germany, and the former Chelsea midfielder believes Werner has the qualities required to adapt to English football.

"I think it's a good decision for both sides," he said. "For Timo, because he fits there, because the way (Chelsea) play football suits him.

"He is a robust player, is very fast, but he is also physically good in a duel and he will quickly get used to it."

The fanfare around Werner comes just two years after his reputation took a hit when he flopped at the World Cup.

He has a history of bouncing back, having overcome criticism for leaving hometown club Stuttgart and an infamous dive in his first season at Leipzig.

Werner became Stuttgart's youngest-ever debutant aged 17 in 2013 and their youngest scorer as he netted three times in his first 10 appearances.

'You have to do more'

Earning the nickname "Turbo Timo" because of his electric pace, which he attributes to running up mountains with his father as a child, Werner has been clocked at 11.1 seconds over 100 metres.

"When I was younger it quickly became clear to me that if you want to become a professional, you have to do more," he said.

Werner became the youngest player to make 50 Bundesliga appearances but despite his goals, Stuttgart were relegated in 2016.

That convinced him to accept an offer to join newly-promoted Leipzig -- an unpopular decision not just to the spurned Stuttgart faithful but German football public at large, given the anger at Leipzig's rise thanks to the backing of Red Bull.

Criticised for a lack of loyalty, Werner found himself public enemy number one when a blatant dive to win a penalty against Schalke enraged fans and pundits.

An unassuming character, he rebuilt his confidence to head to the 2018 World Cup as Germany's leading striker but failed to score in three games as the holders crashed out at the first hurdle for the first time since 1938.

Seeking help from a sports psychologist, Werner showed his maturity by using the backlash to fuel his development.

"He told me that I could silence everyone who doesn't like me by doing just one thing: scoring," Werner told Focus magazine at the time.

Werner's mission was quickly accomplished as his goals fired Leipzig into the Champions League.

With 93 goals in all competitions since joining Leipzig, Werner should add the goal threat Chelsea have often lacked this season.

After a blistering start to the campaign, Tammy Abraham's form had stagnated before the virus lockdown, with an ankle injury hampering his progress.

Werner's ability to cut in from the left or play through the middle offers options to complement Abraham and Olivier Giroud as Chelsea look to close the gap on Liverpool and Manchester City at the top of the Premier League.

RB Leipzig Timo Werner English Premier League Football
Get the latest updates on ICC T20 Worldcup 2022, check out the Schedule and Live Score. Like us on Facebook or follow us on Twitter for more sports updates. You can also download the NDTV Cricket app for Android or iOS.