Manchester United came back from two goals down to beat Southampton 2-3 at the St. Mary's stadium. 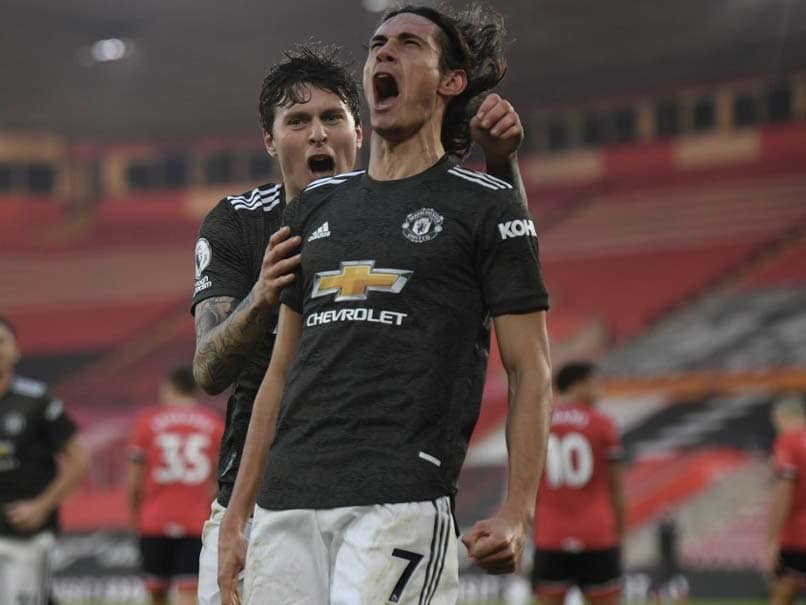 Ole Gunnar Solskjaer praised Edinson Cavani's "hunger" for goals after the Uruguay striker inspired Manchester United's thrilling 3-2 win against Southampton on Sunday. Solskjaer's side were facing a dismal defeat after first half goals from Jan Bednarek and James Ward-Prowse put Southampton in control at St Mary's. But Cavani sparked United's escape act after coming on at the interval. Cavani set up Bruno Fernandes to reduce the deficit and the former Paris Saint-Germain star grabbed the equaliser from his team-mate's deflected shot.

The 33-year-old netted again in the final moments as his third goal since signing as a free agent in October extended United's winning run to four games in all competitions.

"Great impact of course. He is a number nine who wants to be in between the posts, he is always on the move. I'm very pleased with him," Solskjaer said.

"On the training pitch, in the dressing room and during meal times, how meticulous he is. He knows what he wants to eat, how much he wants to recover -- everything!

"It was top movement and his timing is fantastic. His hunger to get on the end of things is the key for a centre-forward.

"Sometimes it hurts and sometimes it doesn't but to score you have to be in there."

It was exactly the kind of influential display Solskjaer was hoping for from Cavani when he moved for him after United's failed pursuit of Borussia Dortmund's Jadon Sancho.

Written off as a panic buy in some quarters, Cavani proved his age should be no barrier to making an impact in the Premier League.

He is only the second player to be directly involved in three goals in a Premier League game after coming on as a substitute for United since Solskjaer scored four against Nottingham Forest in 1999.

"I was quite calm at half-time. We must have had five or six clear-cut chances, so it was about taking them when we got the chance."

United goalkeeper David de Gea came off at half-time with a knee injury and Solskjaer said: "Hopefully he can be okay for Wednesday but I'm not sure."

Southampton took the lead against the run of play in the 23rd minute.

Ward-Prowse curled a corner to the near post and Bednarek got in front of Marcus Rashford to glance his header past De Gea from close range.

Taking aim from the left side of the United area, Ward-Prowse curled a superb free-kick over the wall and past De Gea, whose despairing attempt to claw it out sent him clattering into the post.

It was Cavani's introduction that proved decisive after a curious late arrival on the pitch as he sorted out his boots.

"He probably wasn't able to warm up and then he realised he needed bigger studs. He has to be ready!" Solskjaer said.

Cavani linked up with Fernandes to reduce the deficit in the 59th minute as his cross reached the Portugal midfielder, who swivelled to fire home from 10 yards.

Since his United debut in January, Fernandes has been involved in a league-high 25 goals, scoring 15 and providing 10 assists.

Cavani's experience and quality were on full display in the 74th minute when he instinctively threw himself at Fernandes's deflected shot and headed in from close range.

United weren't finished yet and two minutes into stoppage time, Rashford sent a cross towards Cavani, who stooped to guide a superb header past McCarthy.

Southampton Edinson Cavani Bruno Fernandes Football
Get the latest updates on ICC Women's Cricket World Cup 2022 and IPL 2022, check out the Schedule , Live Score and IPL Points Table. Like us on Facebook or follow us on Twitter for more sports updates. You can also download the NDTV Cricket app for Android or iOS.