Tottenham defeated Southampton in the Premier League, with Song Heung-min putting in a talismanic performance. 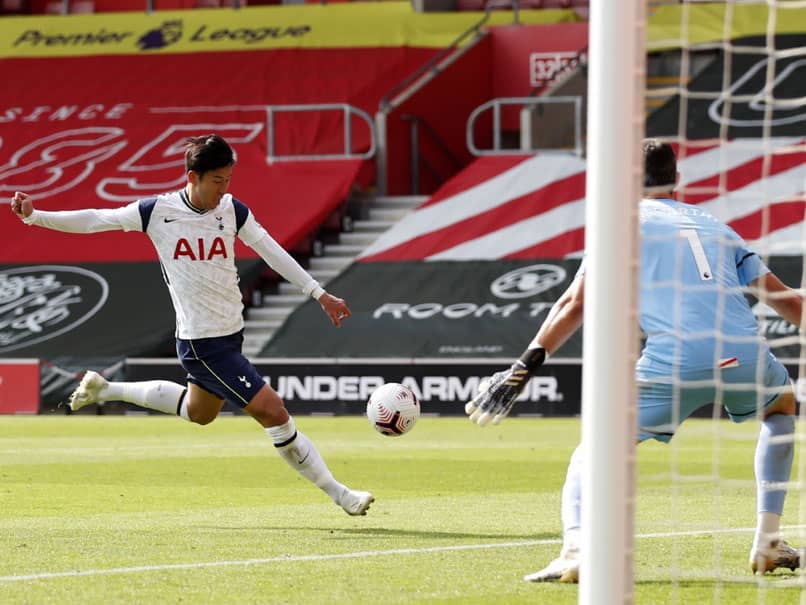 Son Heung-min destroyed Southampton with a four-goal blitz as Tottenham earned their first Premier League win of the season with a 5-2 victory at St Mary's on Sunday. Just 24 hours after Tottenham signed Gareth Bale, South Korea forward Son delivered a virtuoso display that showed Jose Mourinho's side already have plenty of firepower. Bale has returned to Tottenham on a season-long loan from Real Madrid seven years after he left the north London club for a then world record 85 million pounds fee.

But the Wales forward will not be available until mid-October as he recovers from a knee injury, so Mourinho needs Son and Harry Kane to carry the attack until then.

No one would question the quality of that pair and they underlined the point with superb performances that ripped Southampton to pieces.

Danny Ings put Southampton ahead in the first half, but Son equalised before the break and scored three more in the second half.

Kane, who hit the back of the net twice in the first half only to have them ruled out for offside, capped a swaggering display with his second goal of the season.

After losing to Everton in their Premier League opener last weekend, Tottenham have lifted the gloom with this vibrant second half performance after the Bale coup.

Dele Alli was left out of Tottenham's squad and Mourinho raised fresh questions about the midfielder's future when he said: "We have too many players for some positions and some of them are paying the price for this."

But Alli wasn't missed thanks to Son and Kane's heroics.

Tottenham were playing the second of five games in 10 days, an unrelenting schedule that Mourinho had derided as "crazy" and initially they looked fatigued.

Hugo Lloris made a superb save to keep Tottenham level when he tipped over Che Adams' ferocious strike.

Tottenham escaped again when Lloris rashly raced off his line and headed the ball straight at Ings, who curled into the empty net only to see the goal ruled out for handball by the Saints striker.

Southampton winger Moussa Djenepo hit the outside of a post with a curling effort from the edge of the area.

Ings has been linked with a move to Tottenham after a prolific campaign last term and the qualities that attracted Mourinho were on show as he put Southampton ahead in the 32nd minute.

Running onto Kyle Walker-Peters' long pass, Ings displayed his astute movement as he got in behind Eric Dier, then demonstrated his predatory instincts by guiding his shot across Lloris into the far corner.

With Tottenham looking increasingly bedraggled, it was a surprise when they equalised against the run of play in first half stoppage-time.

Tanguy Ndombele picked out Kane on the left and the striker's cross reached Son, who ignored the acute angle to clip a sublime finish past Alex McCarthy.

Son's goal was a huge boost to Tottenham's morale and they took the lead with a well-crafted goal two minutes after half-time.

Once again it was Kane and Son who prised open the Southampton defence as the England captain fed the South Korean with a delicate pass.

Son surged through on goal and calmly guided a precise strike past McCarthy with his left foot.

Tottenham's star forwards weren't finished yet and they left Southampton for dead in the 64th minute.

Dropping deep to devastating effect, Kane was the provider with a superb lofted pass over the Saints defence and Son finished in emphatic fashion.

Southampton had no answers to Kane and Son and another deft pass from the Tottenham striker in the 73rd minute picked out the South Korean, who was never going to miss from close-range.

Kane and Son have now combined for more Premier League goals (24) than any other duo in the competition since August 2015.

Kane got the goal he deserved with a close-range finish in the 82nd minute before Ings netted again with a 90th minute penalty awarded for handball by Matt Doherty.

Southampton English Premier League Football
Get the latest updates on IPL 2020, check out the IPL Schedule for 2020 and Indian Premier League (IPL) Cricket live score . Like us on Facebook or follow us on Twitter for more sports updates. You can also download the NDTV Cricket app for Android or iOS.