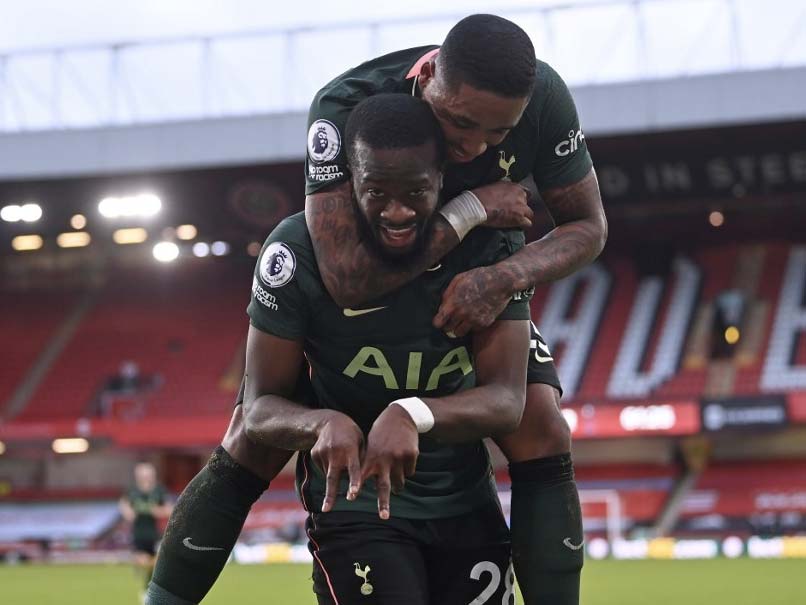 Jose Mourinho hailed "incredible" Tanguy Ndombele as Tottenham climbed back into the Premier League title race thanks to the French midfielder's stunning strike in a 3-1 win against Sheffield United on Sunday. Mourinho's side took an early lead through a rare goal from Ivory Coast defender Serge Aurier. Harry Kane's 19th goal of the season -- the England captain's fourth in his last six games -- increased Tottenham's advantage before half-time.

David McGoldrick got one back for United in the second half, but Ndombele's sublime lob wrapped up the points at Bramall Lane.

The wonder-goal was the latest sign of Ndombele turning his Tottenham career around.

The 24-year-old's fine form is a stark contrast to his struggles in his first season after arriving from Lyon, with Mourinho admitting the player had to change his mindset to get back on track.

"He is incredible. For me sometimes you can score a great goal isolated from your performance. In this case the goal confirmed his performance. It was really, really good," Mourinho said.

Tottenham are on a seven-match unbeaten run in all competitions after winning at Bramall Lane for the first time since 1975.

With a home game against champions Liverpool looming next in the league on January 28, Tottenham still have a chance to mount a serious title challenge.

They sit fourth in the table, just three points behind leaders Manchester United, who were due to play third placed Liverpool later on Sunday.

"We should score more goals in the first half. We were very dominant," Mourinho said.

"A very basic mistake, punished with a goal that brought them to life. We cannot kill ourselves by making basic mistakes.

"But we were then able to realise an incredible action and get a two-goal advantage."

Meanwhile, after securing their first league win this season against Newcastle in midweek, the bottom of the table Blades remain 11 points from safety after their 16th defeat of the campaign.

Mourinho's men made the perfect start as Steven Bergwijn's fierce effort was superbly tipped over by Aaron Ramsdale.

From the resulting corner, Aurier rose highest to meet Son Heung-min's delivery with a powerful header past Ramsdale to give Tottenham a fifth minute lead.

Tottenham have scored five goals in the opening five minutes of Premier League games this season, more than any other team.

Son nearly got on the scoresheet himself moments later when the South Korea forward fired against the post from Kane's pass.

With Tottenham on top, it was half an hour before Hugo Lloris had to make a save as he kept out Oliver Burke's shot.

Lloris had to save again from John Fleck's effort, but Kane doubled Tottenham's lead in the 40th minute.

Kane's sixth goal from outside the area was more than anyone in the Premier League since the start of last season.

He threatened to add another long-range screamer to that list with a thunderous strike tipped over by Ramsdale early in the second half.

McGoldrick gave the Blades an unexpected lifeline when he got above Ben Davies to head home from Fleck's cross in the 59th minute.

Tottenham's habit of sitting back to defend those leads proved costly when they conceded late equalisers against Fulham, Wolves and Crystal Palace in recent weeks.

But Ndombele crushed any hopes of a United comeback in the 62nd minute.

Exchanging passes with Bergwijn, Ndombele ran onto his team-mate's lofted ball and, from an acute angle with two defenders draped over him, he hooked a brilliant improvised lob over Ramsdale.

Tottenham Hotspur Sheffield United Harry Kane Serge Aurier Football
Get the latest updates on ICC T20 Worldcup 2022 and CWG 2022 check out the Schedule, Live Score and Medals Tally. Like us on Facebook or follow us on Twitter for more sports updates. You can also download the NDTV Cricket app for Android or iOS.