West Ham United climbed two points above Chelsea into the Champions League spots as their unexpected European challenge gathered pace with a seventh win in their last nine league matches. 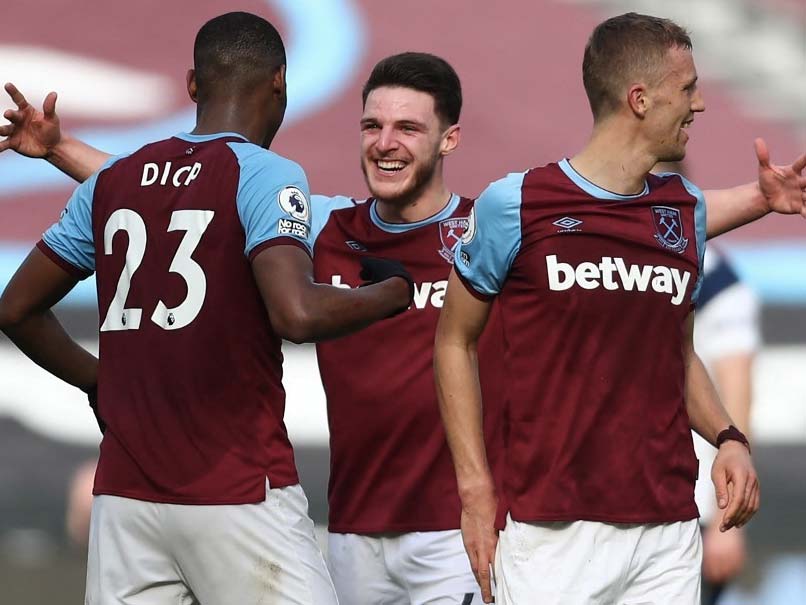 Jose Mourinho admitted troubled Tottenham's top four hopes are in tatters after West Ham moved into fourth place with a 2-1 win on Sunday. Mourinho's side slumped to a fifth defeat in their last six Premier League games as they paid the price for a sloppy defensive display at the London Stadium. Michail Antonio put West Ham in front early in the first half and Jesse Lingard doubled the hosts' advantage after the break. Lucas Moura reduced the deficit with his first league goal since September, but spluttering Spurs were unable to salvage a point.

It was a first triumph for West Ham boss David Moyes in 16 meetings with Mourinho.

And while Moyes has sparked a remarkable revival at West Ham, who were in a relegation battle when he arrived last season, Mourinho's Tottenham are in the middle of a woeful campaign.

They are languishing in ninth and trail West Ham by nine points, albeit with a game in hand.

"It is very difficult to think about the top four. The top six teams are getting points. It will be very hard," Mourinho said.

"The Europa League is a great motivation to get a Champions League spot and a trophy at the same time."

Tottenham have already lost eight league games this season -- the second-worst return of Mourinho's career after losing nine with Chelsea in 2015-16.

Mourinho will have to turn the tide quickly to save his job after Tottenham's latest flop.

"I feel sad, obviously. We started the game with a mistake and started the second half with another one," Mourinho said.

"The team in the second half was trying absolutely everything. We were the team that tried to play but the boys were not lucky."

On West Ham's top four dreams, Moyes said: "We have only done half a job. If we continue this way we will be close. I don't want to be negative in any way.

"We are enjoying it but are also not going to be daft. We will keep calm and hopefully keep pushing the teams at the top.

"This time last year you were asking me if we can avoid relegation so it is a great feeling that is gone."

Tottenham had conceded nine goals in their last three games in all competitions and Antonio exploited more dismal defending to open the scoring in the fifth minute.

When Son Heung-min's slow reaction allowed Jarrod Bowen to whip in a cross from the left, Eric Dier and Japhet Tanganga stood flat-footed as Antonio got between them.

Antonio's initial toe-poked effort was saved by Tottenham keeper Hugo Lloris and the West Ham forward quickly got to his feet to stab in the rebound from close-range.

Tomas Soucek was left with blood streaming down his face after a clash of heads with Tanganga, putting West Ham down to 10 men for five minutes while the midfielder went off to be stitched up.

Even then, toothless Tottenham couldn't make any headway.

Aided by Tottenham's statuesque rearguard, Lingard broke clear to drive a fine finish into the far corner in the 47th minute.

An offside flag looked like it might spare Spurs, but a VAR review overturned the decision as Lingard belatedly celebrated his third goal since signing on loan from Manchester United.

Tottenham needed an immediate response and Harry Kane was just off-target with a fierce free-kick before Lucas got one back in the 64th minute.

Gareth Bale's corner arrowed towards Lucas at the near post and the Brazilian edged in front of his marker to glance a header past Lukasz Fabianski.

Bale almost equalised with a blistering effort from the edge of the area that cannoned off the bar.

Tottenham's luck was out again in stoppage-time when the ball rebounded off Son but looped onto the post and bounced to safety.

Tottenham Hotspur Jesse Lingard Michail Antonio Lucas Moura English Premier League Football
Get the latest updates on IPL Auction 2023 and check out  IPL 2023 and Live Cricket Score. Like us on Facebook or follow us on Twitter for more sports updates. You can also download the NDTV Cricket app for Android or iOS.