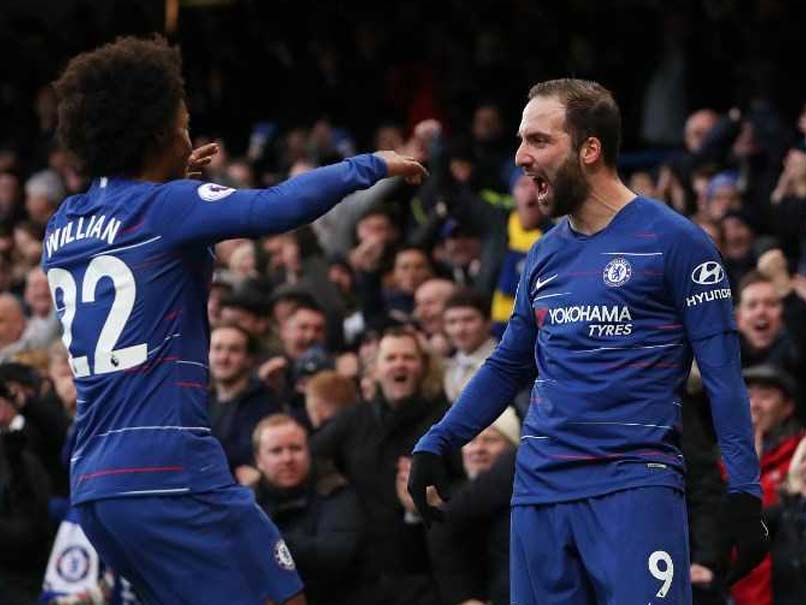 Tottenham Hotspur left it late again, but Son Heung-min's strike seven minutes from time earned a hard-fought 1-0 win over Newcastle Unitied on Saturday to leapfrog Manchester City into second place in the Premier League. Spurs also struck at the death to beat Fulham and Watford in recent weeks to ensure they have kept pace in the league since Harry Kane and Dele Alli were injured. Meanwhile, Chelsea returned to the top four with a 5-0 thrashing of Huddersfield. Eden Hazard and new loan signing Gonzalo Higuain scored two goals each as Chelsea ran riot at Stamford Bridge.

Blues boss Sarri had been under fire after Chelsea suffered their heaviest Premier League defeat for 23 years in a humiliating 4-0 loss at Bournemouth on Wednesday.

Amid reports the Italian is already in danger of the sack less than a year after taking charge, he was indebted to his old friend Higuain for lifting the gloom around Stamford Bridge.

Higuain, signed on loan from Juventus at Sarri's behest after their successful spell together at Napoli, opened his account early in the first half of Chelsea's biggest win of the season.

It was the start of an influential display from the Argentine and, with Eden Hazard free to return to his preferred role on the flanks after a spell up front, Chelsea looked far more vibrant.

In the day's earlier match, Mauricio Pochettino's men close to within four points of leaders Liverpool, who are in action at West Ham on Monday, but just as significantly open up a 10-point lead on Arsenalin the race for a top-four finish and Champions League football next season.

In keeping with a season of struggle, Tottenham were forced all the way by a dogged Newcastle, buoyed by a stunning 2-1 win over Manchester City in midweek that carried the Magpies five points clear of the relegation zone.

Club record 20 million-pounds signing Miguel Almiron did not have international clearance to make his debut so Rafael Benitez named the same side that started against City with the same gameplan to defend deep and frustrate their opponents.

Tottenham had the chances to make an early breakthrough and ensure a much more comfortable afternoon.

Fernando Llorente was left on the bench after the 33-year-old played the full 90 minutes in Spurs' previous three games leaving Lucas Moura to lead the line.

The Brazilian had Spurs' best chance of the first 45 minutes when he headed wide with the goal gaping from point-blank range.

Erik Lamela then saw another headed effort come back off the crossbar as Tottenham camped in the Newcastle half.

For all the hosts dominance of possession, Martin Dubravka was only forced into one serious save before the break when former Newcastle midfielder Moussa Sissoko turned a well-worked corner towards goal.

A similar pattern followed in the second-half, but Newcastle nearly caught Spurs cold with a flowing counter-attack when Salomon Rondon's powerful header from DeAndre Yedlin's cross came back off the post with Hugo Lloris stranded.

Lloris also had to make a flying save to turn a curling effort from Perez behind.

But the vast majority of the play was up the other end as Spurs laid seige to Newcastle's wall of 10 men behind the ball.

Only an incredible clearance off the line from Fabian Schar denied what seemed a certain goal for Christian Eriksen when the Dane flicked a corner goalwards.

Instead it was Son who again stepped up to the mark, just as he did with an equaliser against Watford in midweek, to compensate for Kane's absence with his 14th goal of the season.

The South Korean had a helping hand from Dubravka, though, as the Newcastle keeper let Son's powerful effort slip beneath his grasp to undo all his side's good work in holding out for 83 minutes.

Huddersfield Town Eden Hazard Chelsea vs Huddersfield Town, Game week 25
Get the latest updates on ICC Women's Cricket World Cup 2022 and IPL 2022, check out the Schedule , Live Score and IPL Points Table. Like us on Facebook or follow us on Twitter for more sports updates. You can also download the NDTV Cricket app for Android or iOS.