Premier League Returns With Social Issues High On The Agenda

Player power was behind the Premier League's move to put "Black Lives Matter" on the back of shirts for the first 12 games. 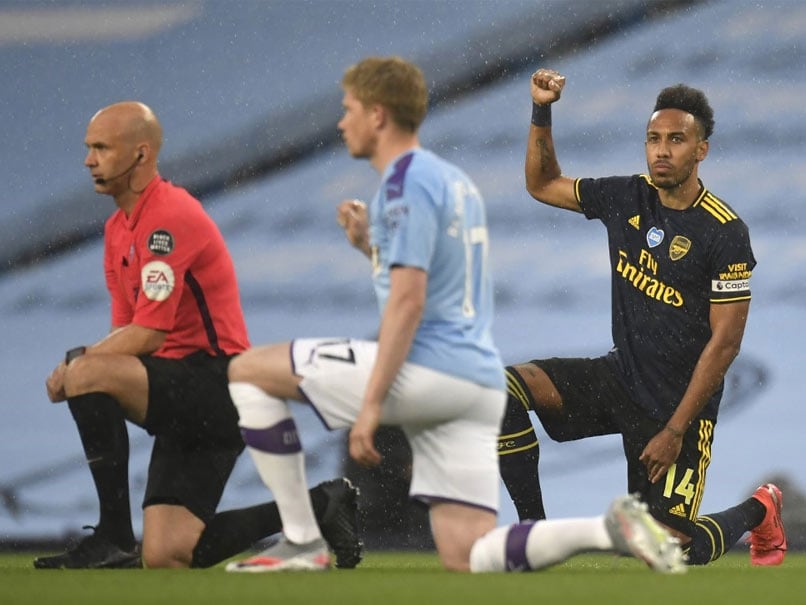 Footballers are using their enormous social media followings in the fight against racism.© AFP

After 100 days on hold, the first act of the Premier League's "Project Restart" in front of a huge global audience saw players, coaches and referees make a stand against racial injustice by taking a knee. The powerful image of all the Aston Villa and Sheffield United players, as well as match officials peacefully protesting, was mirrored at the Manchester City v Arsenal match later on Wednesday. "It was a massive step for the Premier League to allow something like that to happen," said City's Raheem Sterling, who has become a figurehead in the fight against racism.

"It shows we're going in the right direction."

Demonstrators have been kneeling in streets across the globe to protest against racism after the death of George Floyd in US police custody last month.

Player power was behind the Premier League's move to put "Black Lives Matter" on the back of shirts for the first 12 games.

"To give them that much power is a line in the sand for the Premier League about where they are going and on what side of history they want to stand," said former Arsenal and England striker Ian Wright, who was racially abused online last month.

Sterling has used his profile as one of the top players in the English top-flight to encourage young black footballers to speak out.

After suffering alleged racial abuse in a match against Chelsea in December 2018, Sterling challenged the media for the way in which they portrayed black players compared with their white counterparts.

Footballers are not just using their enormous social media followings in the fight against racism.

Manchester United's Marcus Rashford this week forced a government U-turn within two days of launching a campaign to ensure children who receive free school meals are fed throughout the summer holidays.

"It's becoming more normal that people speak out on topics that they believe in and I think it's just positive for the future," said the 22-year-old forward.

"People understand they have a voice and the way we channel it and use it is important."

Rashford has also spoken of the impact Sterling has had on him.

"The first important factor I saw in that was Raheem when he went through his situation being racially abused and how he stood up to that," said Rashford.

"I think that was the turning point for a lot of people. Sometimes it takes that person to do what Raheem did. It's definitely changed the view on how to approach situations for individuals in the sport."

Former Liverpool captain Jamie Carragher says such acts give the lie to the stereotype of the current crop of players as pampered individuals, arguing they are instead "enlightened and pioneering".

"Today's players use their voice to push for social change, which means putting themselves on a pedestal where they know they will be targeted, or told they should 'stick to football'," he said.

Sterling scored the first goal of the Premier League's comeback from the coronavirus lockdown as City swept aside 10-man Arsenal 3-0.

The Gunners felt the impact of a short window to prepare after a three-month lay-off losing two players to injuries inside the first 20 minutes.

But on a night of new normals, with players adjusting to empty stands and strict hygiene protocols including the cleaning of balls, goalposts and dressing rooms, the controversy over the use of technology remained.

Sheffield United were denied victory when goal-line technology failed to spot that Villa goalkeeper Orjan Nyland had clearly carried the ball over the line.

Technology provider Hawk-Eye made a public apology, blaming an unusual combination of players and the goal-post blocking their cameras.

"The goalkeeper was in the Holte End and eight rows back," said Sheffield United manager Chris Wilder. "I don't know whether to laugh or cry."