Manchester City's victory closes the gap on Liverpool at the top to 22 points and means the Reds cannot secure the title when they face Everton in the Merseyside derby on Sunday. 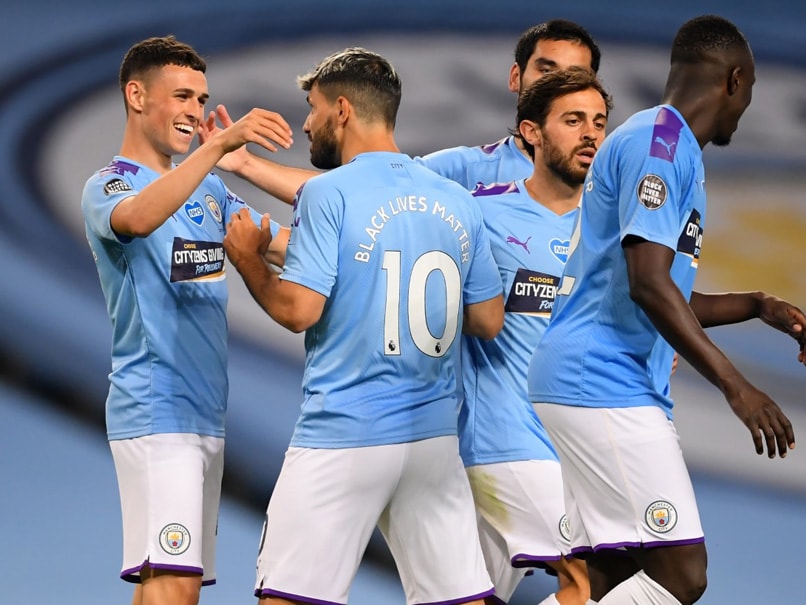 Manchester City secured the first win of the Premier League's restart with a 3-0 victory over 10-man Arsenal at an empty Etihad on Wednesday as the English top flight's return was marked by protests against racial injustice. Both sets of players came together before kick-off to take a knee, as had Aston Villa and Sheffield United players in the first match after a 100-day stoppage due to coronavirus. "I'm embarrassed and ashamed of what the white people have done for the black people," said City manager Pep Guardiola. "We have to do a lot of things for the black people which we have not done so far."

City's victory closes the gap on Liverpool at the top to 22 points and means the Reds cannot secure the title when they face Everton in the Merseyside derby on Sunday.

A minute's silence before kick-off remembered those who had lost their lives to COVID-19, including Guardiola's mother.

Black Lives Matter was also emblazoned on the back of shirts where the stars names are normally printed, as the players took a knee around the centre circle.

There was little return to normality once the game did kick-off to the hollow ring of an empty stadium as a torrential downpour added to the difficult conditions for the players.

"We expected it to be weird," said City's Raheem Sterling. "The first 10 minutes it was getting used to the atmosphere and getting the cobwebs off."

However, City soon found their groove just as Arsenal were disrupted by two early injuries.

Gunners' boss Mikel Arteta had made a bold team selection on his return to the Etihad, where he spent three-and-a-half years as Guardiola's assistant.

The Spaniard left Alexandre Lacazette and club record signing Nicolas Pepe alongside David Luiz on the bench, while Mesut Ozil did not even make the squad despite a temporary rule change to allow nine substitutes on the bench.

Guardiola had voiced his concerns for players' welfare over the lack of preparation time to get up to full fitness.

But it was Arteta's plan that was undone inside 20 minutes as Granit Xhaka and Pablo Mari hobbled off with Luiz replacing the latter.

"Everything went wrong from the first minute when Granit got injured," said Arteta, who was left in no doubt of the work he has ahead to close the gap between his new employers and his old.

As City began to turn the screw, only Bernd Leno in the Arsenal goal kept the score down before half-time.

However, Sterling made the breakthrough when Luiz failed to cut out Kevin De Bruyne's cross and the England international rifled home his first goal of 2020.

Five minutes into the second-half, Arsenal's tough task became an impossible one as Luiz pulled down Riyad Mahrez inside the box and was shown a red card.

"It was not the team's fault, it was my fault. The coach is amazing, all the players did amazing, it was just my fault," said Luiz, whose contract is due to expire on June 30.

"I should have taken a different decision in the last two months to try and decide my future as early as possible but I didn't."

De Bruyne coolly sent Leno the wrong way from the penalty spot to end the game as a contest.

There was one more serious looking injury to come as City defender Eric Garcia was stretchered from the field after being wiped out by his own goalkeeper Ederson leading to 11 minutes of added time.

"He is conscious, that is a good sign, but he is going to get an extra test," said Guardiola of Garcia's condition.

Defeat is another blow for Arsenal's hopes of a return to the Champions League next season as they remain in ninth, eight points off the top four.

Manchester City English Premier League Football
Get the latest updates on Fifa Worldcup 2022 and check out  Fifa World Cup Schedule, Stats and Live Cricket Score. Like us on Facebook or follow us on Twitter for more sports updates. You can also download the NDTV Cricket app for Android or iOS.