Raheem Sterling inspired Manchester City to a 3-1 win over Bournemouth, while Crystal Palace clinched a crucial 2-0 victory over Burnley. 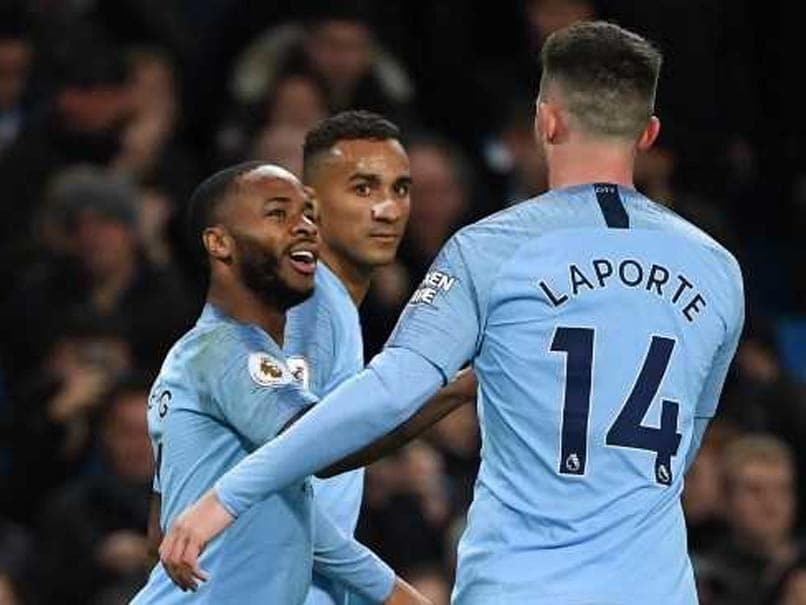 Raheem Sterling struck from close-range in the second half at the Etihad Stadium.© AFP

Manchester City moved five points clear at the top of the Premier League as Raheem Sterling inspired a 3-1 win over Bournemouth, while Crystal Palace clinched a crucial 2-0 victory over relegation rivals Burnley on Saturday. Pep Guardiola's side racked up their sixth successive league win thanks to a second half surge after Bournemouth shocked the Etihad Stadium. City hold a significant lead over second placed Liverpool, but they can close the gap back to two points if they beat Everton in the Merseyside derby at Anfield on Sunday.

Guardiola left City's record goal-scorer Sergio Aguero out of the squad, but even the Argentine star's absence couldn't halt the champions' momentum in the Premier League.

City had scored 40 goals in their previous 13 league games and it took them just 16 minutes to shatter Bournemouth's resistence as Bernardo Silva bagged his second goal of the season.

Leroy Sane's shot was saved by Asmir Begovic, but Silva was on hand to tap into the empty net.

City were stunned in the 44th minute when Callum Wilson headed Bournemouth's equaliser from a Simon Francis cross.

But the leaders restored order in the 57th minute as Sterling continued his mastery of Eddie Howe's team.

Sterling netted from close-range after Begovic spilled Danilo's shot, making it eight goals in six league appearances against Bournemouth for the City winger.

Ilkay Gundogan put the result beyond doubt when the German finished a fine move involving Bernardo Silva and Sane in the 79th minute.

Heading into this weekend, Palace had managed two points at home this season, scoring only two home goals, which were both penalties.

Roy Hodgson's team finally ended their drought from open play in bizarre fashion when James McArthur's 16th minute cross was missed by players from both teams, hit the far post and trickled into the net.

Andros Townsend's 77th minute curler ensured Palace would win for the first time since September and condemn third bottom Burnley to a seventh successive league game without a win.

Brighton conceded the fastest goal in the Premier League this season, but Chris Hughton's team recovered to win 2-1 at 10-man Huddersfield.

David Wagner's side took just 54 seconds to open the scoring through Mathias Jorgensen.

But fourth bottom Huddersfield were reduced to 10 men when Steve Mounie was sent off for a 32nd minute foul on Yves Bissouma.

The Seagulls sealed their first win in four games thanks to Florin Andone's maiden goal in English football in the 69th minute.

Leicester won for just the second time in seven league games as Watford slumped to a 2-0 defeat at the King Power Stadium.

Claude Puel's side won an 12th minute penalty when Jamie Vardy was brought down by Watford goalkeeper Ben Foster and the England striker converted it himself for his fifth goal of the season.

James Maddison, back in the team after a ban for diving, doubled Leicester's lead in the 23rd minute with a fine finish.

Watford's misery was complete when Etienne Capoue was sent off in the 90th minute for a lunge on Kelechi Iheanacho.

Newcastle fans had called for supporters not to take their seats until the 11th minute in protest against "11 wasted years of Mike Ashley's tenure as chairman at the club".

And, in a fittingly farcical twist for the troubled club, the fans who joined the protest were only just settling into their seats when Newcastle fell behind in the 11th minute to Hernandez's cool finish.

West Ham had won just one of their previous six league games, but Hernandez netted again in the 63rd minute before Felipe Anderson capped the rout in stoppage-time.

Burnley Raheem Sterling English Premier League Football
Get the latest updates on ICC Women's Cricket World Cup 2022 and IPL 2022, check out the Schedule , Live Score and IPL Points Table. Like us on Facebook or follow us on Twitter for more sports updates. You can also download the NDTV Cricket app for Android or iOS.