Premier League: Mohamed Salah Back In The Goals As Liverpool Ease Past Southampton

Liverpool have now won their first six league games for the first time since 1990. 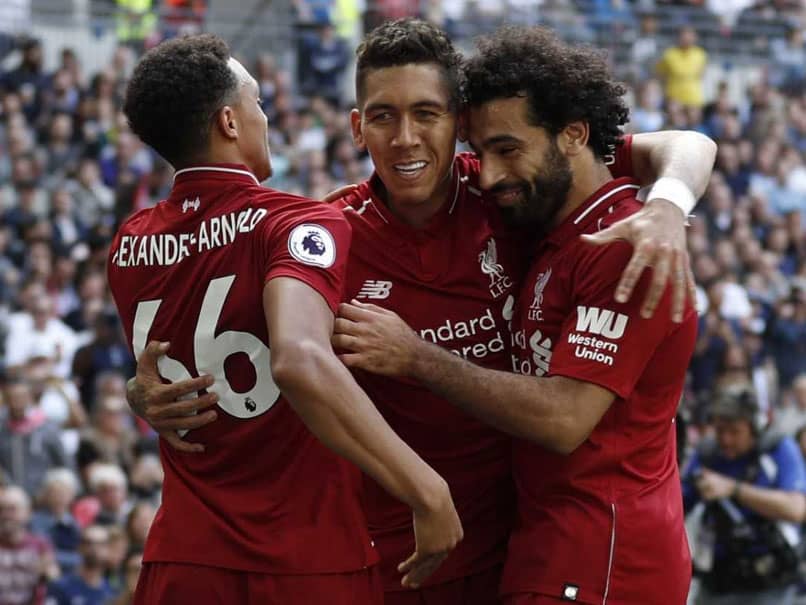 Liverpool stormed back to the top of the Premier League with 3-0 victory.© AFP

Liverpool stormed back to the top of the Premier League with 3-0 victory over Southampton with Mohamed Salah back among the goals at Anfield. Liverpool have now won their first six league games for the first time since 1990, the same year they last won the title. The victory meant the Reds overtook Chelsea, who play on Sunday, and remained two points ahead of champions Manchester City. Jurgen Klopp's men scored all their goals before half-time as Wesley Hoedt turned Xherdan Shaqiri's deflected shot into his own net before Joel Matip's soaring header and Salah's tap in just before the break sealed the points early on.

However, victory may yet have come at some cost, with Shaqiri replaced at half-time and Virgil van Dijk walking off with an injury 10 minutes into the second period against his former club.

Liverpool's momentum continues to build after victory against top four rivals Spurs at Wembley last weekend and a thrilling late 3-2 win over Paris Saint-Germain on Tuesday in the Champions League.

The strength in depth now on offer to Klopp was shown in midweek as Daniel Sturridge scored on his first start of the season.

This time it was Shaqiri's chance to shine on his first start since his summer arrival from Stoke.

The Swiss international took just 10 minutes to make an impact, although he was helped by some good fortune as he broke the deadlock.

Sadio Mane's clever pass inside the full-back saw Shaqiri cut inside Cedric Soares and take a shot, which deflected off Shane Long and cannoned over the line via the helpless Hoedt.

Southampton were almost gifted an equaliser straight away from Matip's sloppy pass, but Van Dijk was strong enough to see off Long, while Jannik Vestergaard's header from a corner was just wide.

Klopp had been forced to defend Salah's form in the lead up to the game as the Egyptian has failed to match the performances of his stunning 44-goal campaign last season in recent weeks.

However, Salah was heavily involved before Liverpool's second. His lovely turn and switch of passes with Roberto Firmino, restored to the starting line-up after his late heroics as a substitute against PSG ended with Salah through on goal, only to be denied by Soares' last ditch tackle.

From the resultant corner, Matip, making his first start of the season, soared high to direct a header past the goalkeeper and give the home side a two-goal cushion on 20 minutes.

Salah came close again with a sublime back heel which just drifted past the post.

But his wait for a goal after a three-game drought was soon over when Shaqiri's wonderful 25 yard free-kick hit the crossbar and Salah grabbed his third goal of the season as it sat up invitingly on the line.

With Chelsea and City to come in their next two league games and a Champions League visit to Napoli in between, Liverpool understandably took their foot off the gas in the second-half.

And the sight of Van Dijk hobbling off with a rib injury will be a concern for Klopp ahead of such a demanding run of games.

So far, though, Klopp's men have passed every test they have faced this season to raise hopes a first title in 29 years could be coming to Anfield come May.

Southampton English Premier League Liverpool vs Southampton, Game week 6 Football
Get the latest updates on India vs England Series, India vs England , live score and IPL 2021 Auction . Like us on Facebook or follow us on Twitter for more sports updates. You can also download the NDTV Cricket app for Android or iOS.