Booked for tripping Aguero in the 84th minute, Fellaini fouled him again seconds later and then blatantly butted the Argentinian, leaving referee Martin Atkinson no option but to send the Belgian off. 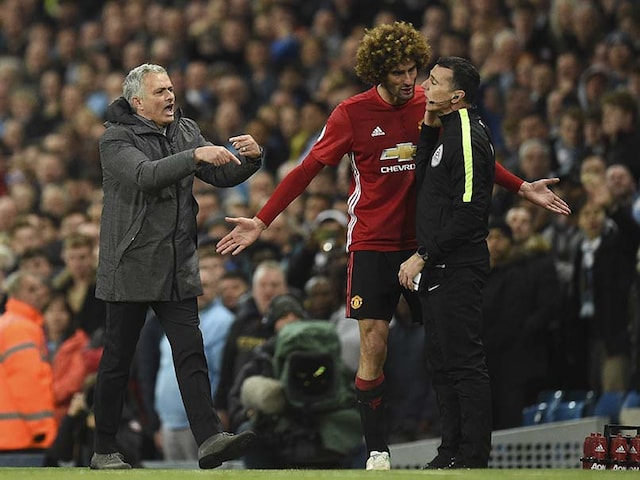 Marouane Fellaini was sent off for headbutting Sergio Aguero.© AFP

Booked for tripping Aguero in the 84th minute, Fellaini fouled him again seconds later and then blatantly butted the Argentinian, leaving referee Martin Atkinson no option but to send the Belgian off.

City remain fourth, a point behind third-place Liverpool with a game in hand, with United -- who also have a game in hand on Jurgen Klopp's side -- a point further back in fifth place.

"They had more of the ball, more chances, but my players were amazing the way they fought.

"Marouane Fellaini is frustrated. He says that with another player, it would probably not be a red card."

While United are now unbeaten in 24 Premier League games, equalling the club record, the Etihad Stadium stalemate means City retain the upper hand in the push for a top-four finish.

But despite controlling the game, City came no closer to scoring than an early Aguero effort that hit the post, while substitute Gabriel Jesus had an injury-time header disallowed for offside.

City also lost goalkeeper Claudio Bravo to an apparent calf injury, sustained as he caught a high ball, with Willy Caballero taking his place for the last 14 minutes after Bravo was stretchered off.

"We all have tough games coming up now and we know it's not an option to not win these games."

City remain on course for a top-four finish, their last remaining objective after last weekend's FA Cup semi-final loss to Arsenal consigned Guardiola to his first trophy-less season as a coach.

United could yet qualify for the Champions League by winning the Europa League.

But in the main, Thursday's drab derby served to illustrate why the Manchester rivals are squabbling over fourth place rather than fighting for the title.

Marcus Rashford returned in one of four changes and while his lightning pace enabled him to leave Nicolas Otamendi for dead repeatedly, the teenager cut an isolated figure.

The football that managed to emerge above the midfield melee was almost all City's.

The hosts hit the woodwork in the ninth minute, Aguero cushioning a volley against the base of the right-hand post from Kevin De Bruyne's right-wing cross.

United goalkeeper David de Gea fielded curlers from De Bruyne and Aguero and saved at his near post from Aleksandar Kolarov, while Aguero and Raheem Sterling arrowed shots over the bar.

But there were two moments of unease in the hosts' box, the first when Bravo clawed Anthony Martial's cross into the path of Henrikh Mkhitaryan, whose shot he was then obliged to block.

Shortly before half-time, Rashford's free-kick from the left found Herrera unmarked at the back post, but the Spaniard headed wide.

City continued to force the issue after the break, but United, expertly marshalled by Eric Bailly and Daley Blind, kept them at bay.

De Gea comfortably saved from Sterling, twice, and Aguero, while De Bruyne ruffled the side-netting with a low drive after cutting in from the left.

Otamendi looked poised to break the deadlock when he rose to meet Kolarov's corner, but Bailly diverted his header over the bar.

Fellaini's dismissal gave City the edge and Guardiola immediately introduced Jesus, back from a broken foot sustained in February.

The Etihad erupted when the Brazilian headed in Aguero's cross, but an offside flag silenced the home fans and a stretching Aguero could only volley wide from De Bruyne's cross moments later.

Comments
Topics mentioned in this article
Manchester City Manchester United English Premier League Football Marouane Fellaini
Get the latest Cricket news, check out the India cricket schedule, Cricket live score . Like us on Facebook or follow us on Twitter for more sports updates. You can also download the NDTV Cricket app for Android or iOS.