Marcos Rojo put Manchester United ahead in the 23rd minute at Old Trafford, but Joshua King levelled from the spot five minutes before half-time following a foul on Marc Pugh by Phil Jones. 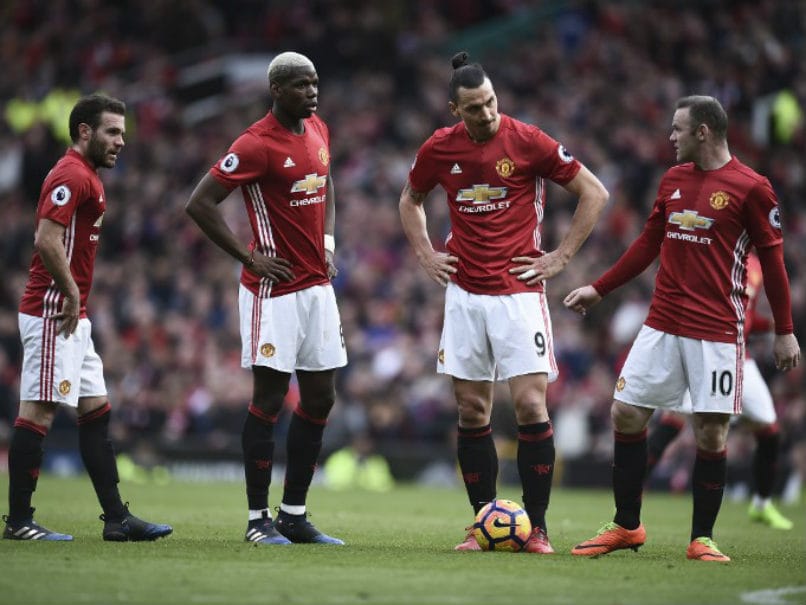 Manchester United remain sixth in the Premier League, a position they have occupied since November.© AFP

Manchester United striker Zlatan Ibrahimovic is likely to face disciplinary action after appearing to elbow Bournemouth's Tyrone Mings during Saturday's fiery 1-1 draw in the Premier League. Mings appeared to stamp on Ibrahimovic's head with his left foot as he jumped over him late in the first half and the Swedish striker seemed to elbow him in retaliation moments later. Elsewhere, champions Leicester City continued their smooth adaptation to life after Claudio Ranieri by winning 3-1 at home to fellow strugglers Hull City.

Ibrahimovic, who also squandered a penalty, told BBC Sport: "You have the TV, you can see the images. I jump up and jump high and he (Mings) jumps into my elbow. It is not my intention to hurt someone."

Marcos Rojo put United ahead in the 23rd minute at Old Trafford, but Joshua King levelled from the spot five minutes before half-time following a foul on Marc Pugh by Phil Jones.

Adam Smith's handball gave Ibrahimovic a chance to restore United's lead from the penalty spot, but his spot-kick was brilliantly palmed away by Bournemouth goalkeeper Artur Boruc.

Victory would have taken United into the Champions League places, but they remain sixth, a position they have occupied since November.

Jose Mourinho's side could lose ground in the race for Champions League qualification later on Saturday when fifth-place Liverpool welcome fourth-place Arsenal to Anfield.

Ibrahimovic was already on a booking when he tangled with Mings, but both players avoided punishment, raising the prospect of violent conduct charges from the Football Association.

The standard punishment for violent conduct in the Premier League is a three-game ban.

United captain Wayne Rooney felt Mings's stamp had been deliberate, saying: "There's no place for it and I'm sure there will be punishment for it after the game."

But Mings, whose side remain 14th, said the contact with Ibrahimovic had been accidental.

"I would never do that. That's not in my game," Mings said. "Hard and fair is how I like to tackle, but off-the-ball stuff like that isn't part of my game."

Referee Kevin Friend also sent off Bournemouth's Andy Surman for two bookable offences, although he had to be reminded by United left-back Luke Shaw that the midfielder had already been booked.

"Who can I blame?" Mourinho said. "Ourselves. Nobody else. We missed big chances."

Leicester's resurgence continued as they beat Hull 3-1 to pull five points clear of the relegation zone.

The champions beat Liverpool 3-1 last Monday in their first game since the sacking of popular manager Ranieri and caretaker coach Craig Shakespeare saw them record back-to-back wins for the first time since last April.

Sam Clucas gave Hull a 14th-minute lead, but Leicester stormed back to win through strikes from Christian Fuchs and Riyad Mahrez and a Tom Huddlestone own goal.

Hull are now four points from safety and they were joined in the bottom three by Middlesbrough, who fell to two Marko Arnautovic goals in a 2-0 defeat at Stoke City.

Wilfried Zaha and Andros Townsend struck in the second half as Sam Allardyce's Crystal Palace moved three points clear of danger with a 2-0 success at West Bromwich Albion.

Meanwhile, Manolo Gabbiadini scored his sixth goal in four games as Southampton bounced back from last weekend's League Cup final loss to United by winning 4-3 in an entertaining game at Watford.

Comments
Topics mentioned in this article
Manchester United Bournemouth Leicester City Hull City Tigers Southampton Swansea City Crystal Palace Zlatan Ibrahimovic Tyrone Mings English Premier League Football
Get the latest updates on India vs South Africa and check out  Schedule, Results and Live Score. Like us on Facebook or follow us on Twitter for more sports updates. You can also download the NDTV Cricket app for Android or iOS.