Jurgen Klopp's men calmed fears over their staying power following a recent dip in form as they chase down their first top-flight title since 1990. 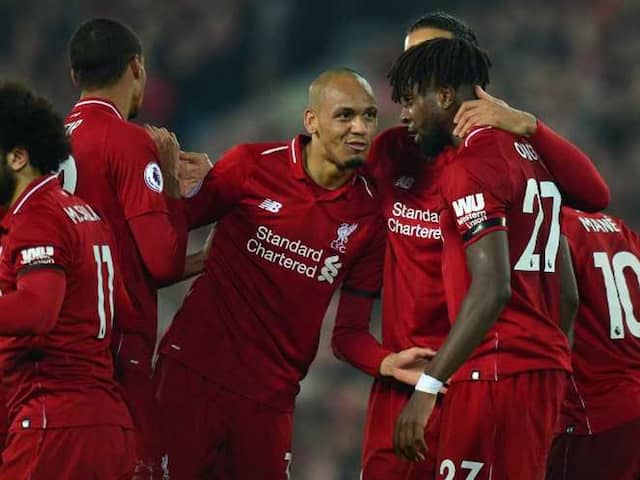 Liverpool demolished Watford 5-0 to stay ahead of a charging Manchester City.© AFP

Sadio Mane and Virgil van Dijk both struck twice as Liverpool demolished Watford 5-0 to stay ahead of a charging Manchester City at the top of the Premier League on Wednesday. Jurgen Klopp's men calmed fears over their staying power following a recent dip in form as they chase down their first top-flight title since 1990. Defending champions City finally broke the resistance of West Ham at the Etihad Stadium in the second half to stay just one point behind Liverpool, while third-placed Tottenham slipped to a damaging 2-0 defeat at Chelsea.

Arsenal swatted aside a limp Bournemouth team 5-1 to remain in fourth place, one point clear of Manchester United, with Romelu Lukaku taking advantage of the absence of Marcus Rashford to score twice in a 3-1 win at Crystal Palace.

Liverpool came into their match after three draws in four league matches but Mane settled their nerves early, heading home a cross from Trent Alexander-Arnold before the pair teamed up again, with the Senegalese forward producing an audacious backheel strike.

Divock Origi extended the lead midway through the second period and defender Virgil van Dijk netted twice late on to complete the rout.

"The boys showed how much they enjoy the game and the situation," a delighted Klopp told the BBC.

"It was an important sign. You know what was written and said about us. It is of course not right. These boys are outstanding and today they showed so much passion."

City dominated possession in a one-sided first half at the Etihad but were frustrated by Manuel Pellegrini's tenacious West Ham side.

But Sergio Aguero broke the deadlock for City from the penalty spot in the 59th minute, with the spot kick awarded after Felipe Anderson brought down Bernardo Silva.

"Had we scored one or two in the first five minutes the game would have been completely different, but we did very well," City boss Pep Guardiola told the BBC.

"We fought a lot to be close to Liverpool," he added. "The result could be better, but the way we played is fantastic."

Spurs boss Mauricio Pochettino conceded that the Premier League title is now beyond his side after a second straight defeat.

"After Burnley I said it was difficult, and tonight makes it impossible to fight Man City and Liverpool," he said "Only they can win the league -- we must fight to win games and to be fair."

Tottenham will now be looking nervously over their shoulders after their defeat left them just four points clear of Arsenal ahead of the weekend meeting between the two sides.

Kepa Arrizabalaga was dropped by Maurizio Sarri as the Blues' goalkeeper paid the price for his refusal to be substituted during Sunday's League Cup final.

Chelsea broke the deadlock in the 57th minute when Cesar Azpilicueta fed the ball to Pedro, who slotted past Hugo Lloris and they doubled their lead when Kieran Trippier accidentally passed the ball into the back of his own net.

Unai Emery made six changes for Arsenal's home game against Bournemouth, with one eye on Saturday's Wembley clash against Spurs.

Arsenal opened the scoring in the fourth minute when Mezut Ozil scored his fifth goal of the season, Henrikh Mkhitaryan doubling the lead shortly before the half-hour.

Lys Mousset pulled a goal back but Laurent Koscielny restored Arsenal's two-goal cushion early in the second half and there were further goals for Pierre-Emerick Aubameyang and Alexandre Lacazette.

Ole Gunnar Solskjaer's injury-hit United kept up the chase for a Champions League place, beating Crystal Palace thanks to two goals from Romelu Lukaku and a late third from Ashley Young, who restored United's two-goal lead after Joel Ward had given Palace hope.

United, missing a clutch of players including Anthony Martial and Jesse Lingard, and with Marcus Rashford on the bench, notched an eighth consecutive away win in all competitions for the first time in the club's history.

Southampton beat Fulham 2-0 with goals from Oriol Romeu and James Ward-Prowse to edge out of the relegation zone, with Claudio Ranieri's men now 10 points off safety and looking doomed.

On Tuesday there were wins for Everton, Huddersfield, Leicester and Newcastle.