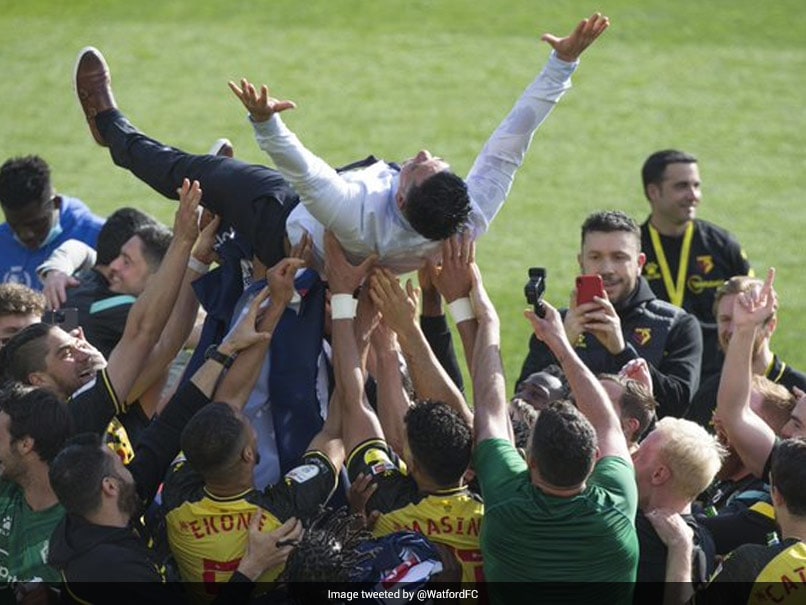 Premier League: Watford celebrate their promotion after their win vs Millwall.© AFP

Watford bounced back to the Premier League at the first time of asking after Saturday's 1-0 win over Millwall sealed promotion. Brentford's win at Bournemouth earlier in the day meant that only three points would be good enough for Xisco Munoz's men to be promoted alongside Norwich, who came down with them last season. Ismaila Sarr's early penalty gave Watford the perfect start, but they had to withstand a nervy finale to guarantee their place back in the prestige and riches of the English top-flight.

Prior to Munoz's appointment on December 20, automatic promotion looked unlikely after dip in form under Vladimir Ivic.

However, 17 wins in just 24 league games under the Spaniard helped amass a 10-point lead over Brentford, who have just three games left to play.

"Everyone helped me, I have a big group behind me and it was an excellent run in the to the season," said Munoz.

"I have been lucky with the players, we have a great connection, when everyone works with the same ideas and passion."

Brentford are now at least guaranteed a playoff spot with Bournemouth, Barnsley and Swansea almost certain to join them in the battle for the final promotion place.

A week after securing their promotion, Norwich closed in on the Championship title with a 3-1 win at Queens Park Rangers to maintain their five-point lead over Watford with two games to go.

At the other end of the table, all of the bottom three lost to give Wayne Rooney's Derby a reprieve despite the Rams losing 2-1 at home to Birmingham.

Rotherham and Sheffield Wednesday, who lost 3-1 at Middlesbrough, are still four points behind Derby, although Rotherham have two games in hand to try and overturn that gap.

Bottom-of-the table Wycombe were realistically relegated by a 2-1 defeat at Cardiff.

The Wanderers are six points adrift of Derby but have also have a 13-goal gap to bridge on goal difference.

Norwich City Brentford Ismaila Sarr English Premier League Football
Get the latest updates on ICC T20 Worldcup 2022, check out the Schedule and Live Score. Like us on Facebook or follow us on Twitter for more sports updates. You can also download the NDTV Cricket app for Android or iOS.