Watford and Bournemouth were relegated from the Premier League but there was joy for Aston Villa, who avoided the drop by the skin of their teeth. 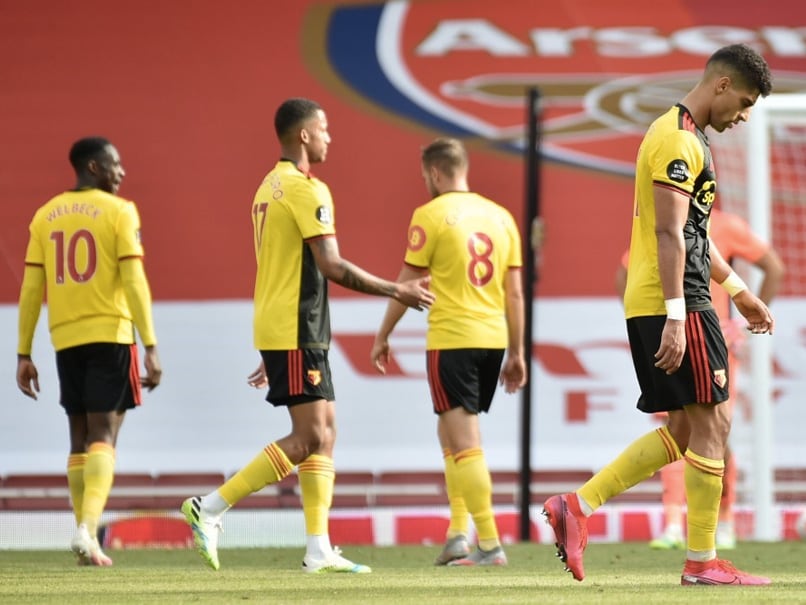 Watford lost 2-3 to Arsenal on the final day of the Premier League, ending the season in 19th place.© AFP

Watford captain Troy Deeney and Bournemouth boss Eddie Howe accepted responsibility for the pain of relegation from the Premier League, while Aston Villa manager Dean Smith is planning a party after avoiding the drop on Sunday. Deeney's penalty was not enough to prevent Watford losing 3-2 at Arsenal as the Hornets' decision to sack a record three managers in a Premier League season, including Nigel Pearson with just two games remaining, backfired. "This is a reflection of the whole year," Deeney told Sky Sports. "I will take the stick on social media but the harsh reality is people will lose their jobs because we haven't been good enough.

"The whole top to bottom will do an audit and reassess. It is not just us.

"We can't say we got it right because we failed. The bigger thing is for the fans and people at clubs because they will be here longer than players."

Deeney has played through the pain barrier in recent weeks, but hinted his 10 years at Vicarage Road could also be coming to an end.

"I will be having a knee operation next week. Clubs can go in different directions and players can," he added.

"If that is my last game, I am happy I went out on my shield. I am a simple man. Did I go out and do everything I could? Yes. Was it good enough? No."

Bournemouth won 3-1 at Everton, but the damage was already done as the Cherries' five-year stay in the top flight came to an end.

Howe insisted the responsibility for Bournemouth's relegation lies with him rather than his under-performing players.

"It hurts. I'm trying to keep it together. I'm really sad for the fans of this club.

"It's small margins, there has been loads of moments during the season. As the manager I make hundreds of decisions and I haven't been good enough this season.

"I'm not going to sit here and criticise the players in any way, I have to back them and support them. First I have to look at myself and that I will do."

Villa did just enough to prevent an immediate return to the Championship as they secured a 1-1 draw at West Ham in a dramatic finale.

Jack Grealish put Smith's side ahead six minutes from time in what could be a parting gift from the Villa captain, who has been linked with a move to Manchester United and Manchester City.

However, just a minute later, Andriy Yarmolenko's deflected effort ensured there was a nervy end for Villa.

A lifelong Villa fan, Smith lost his father, who used to be a steward at Villa Park, to coronavirus during the Premier League's three-month stoppage due to the pandemic.

"I was brought up a Villa fan. It is a proud moment and feels better than going up last season," said Smith.

"It was a big change we had to make at the football club. We had to build a new team, a new squad.

"We used the pandemic to the best. I lost my father through that period and there was a lot of disappointment, but we knew we had to work hard.

"I have lost my voice. I expect Jack Grealish to get drunk with me tonight."

Aston Villa English Premier League Football
Get the latest updates on ICC T20 Worldcup 2022, check out the Schedule and Live Score. Like us on Facebook or follow us on Twitter for more sports updates. You can also download the NDTV Cricket app for Android or iOS.