Gonzalo Higuain will be reunited with Maurizio Sarri, who managed the 31-year-old at Napoli. 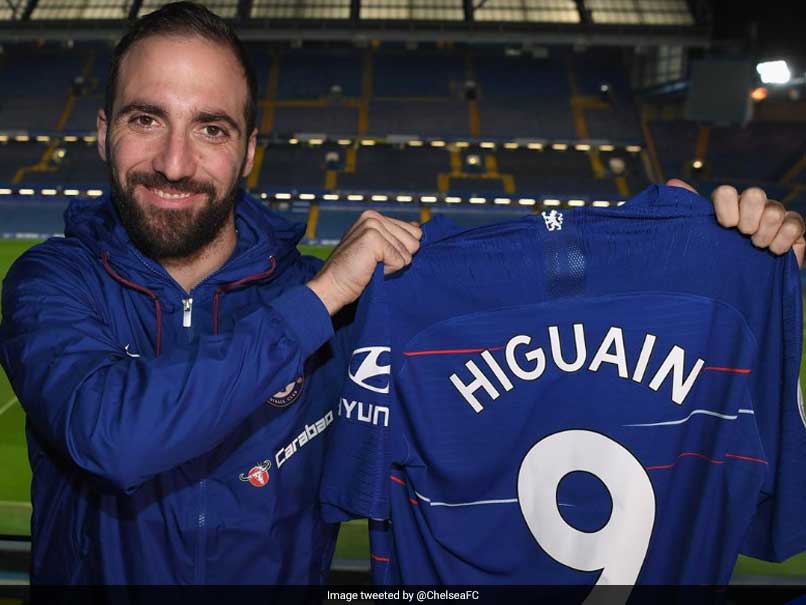 Gonzalo Higuain has moved to Chelsea on loan from Juventus until the end of the season.© AFP

Chelsea signed Argentina striker Gonzalo Higuain on loan from Juventus until the end of the season on Wednesday as boss Maurizio Sarri looks to ignite his spluttering attack. Higuain will be reunited with Sarri, who managed the 31-year-old at Napoli and made him his top target in the January transfer window. After spending the first half of the season in a disappointing loan spell at AC Milan, Higuain admitted he was keen to move to Stamford Bridge. "When the opportunity to join Chelsea presented itself I had to take it," he told Chelsea's website.

"It's a team I've always liked that has a lot of history, a wonderful stadium and they play in the Premier League, a league I've always wanted to play in.

"I now hope I can give back that trust Chelsea have shown me out on the pitch. I can't wait to start and I hope to adapt as soon as possible."

Higuain had scored just once in his last 12 appearances for AC Milan.

But the former Real Madrid star, who will wear Chelsea's number nine shirt, is expected to recreate the fruitful relationship he had with Sarri in their one season together at Napoli in 2015-16.

He scored 36 league goals in 35 games for Napoli, breaking the Serie A single-season record.

Sarri was desperate to land a quality forward after enduring a series of frustrating results due to Chelsea's inability to kill off their rivals.

Spain striker Alvaro Morata has suffered a wretched time at Chelsea and is keen to join Atletico Madrid, while France forward Olivier Giroud has been plagued by injuries and inconsistent form.

Chelsea's problems up front forced Sarri to play Belgium star Eden Hazard out of position as a striker rather than in his preferred position on the flanks.

Hazard's form has suffered as a result and Sarri will hope Higuain's presence will spark a revival in Chelsea's fortunes, while allowing Hazard to return to the role he has filled so effectively on the left wing.

Higuain, who has been capped 75 times by his country, arrives at Chelsea to find the club struggling with a confidence crisis that threatens to wreck their season.

The west London club sit fourth in the Premier League, but are only three points ahead of Arsenal and Manchester United.

Following a limp 2-0 defeat at Arsenal on Saturday, Sarri criticised his players and admitted he finds it hard to motivate them.

No wonder he was so delighted to get the Higuain deal completed.

"It's very difficult in January to find one of the most important strikers in the world. So I think the club is working very well because it's not easy to get a new striker," Sarri said.

"We hope he'll bring goals, that he starts scoring for us. He's also very good at other aspects, other than just goals, but that's what we are hoping for.

"He has had some difficulties recently, but we're hoping we can raise him back to his best form."

The Blues had until 1200 GMT to register Higuain for that match, but instead he will have to wait for his debut, which could come against Sheffield Wednesday in the FA Cup fourth round on Sunday.

If not, Higuain could feature when Chelsea travel to Bournemouth in the Premier League on January 30.

Juventus revealed the existence of two options attached to the deal, with Chelsea able to sign Higuain outright during the loan spell for around 31.3 million pounds.

"The agreement grants to Chelsea the options to extend the duration of the loan until 30 June 2020, for a consideration of 18 million euros (15.7 million pounds) to be paid in 2019-20 financial year," a statement on Juventus's website read.

"Or to acquire the registration rights of the player on a permanent basis for 36 million euros (31.3 million) to be paid in two financial years."

Napoli English Premier League Football
Get the latest updates on IPL Auction 2023 and check out  IPL 2023 and Live Cricket Score. Like us on Facebook or follow us on Twitter for more sports updates. You can also download the NDTV Cricket app for Android or iOS.