Yedlin deflected Marcos Alonso's shot into his own net in the 87th minute to settle a match that had threatened to end in frustration for Chelsea manager Maurizio Sarri. 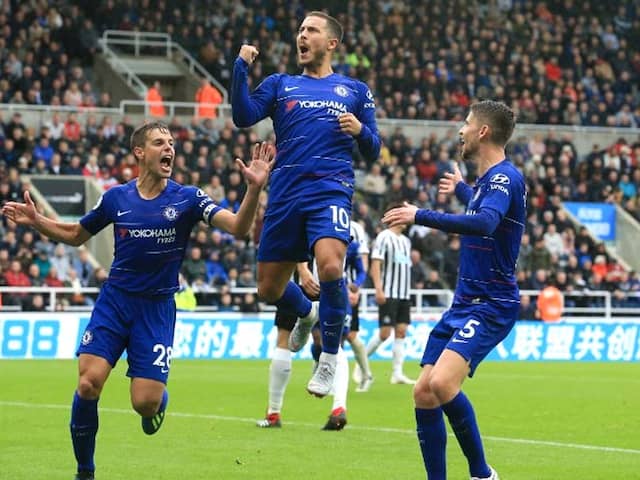 Chelsea required an own goal from Newcastle's DeAndre Yedlin to maintain their 100 per cent start to the Premier League season as the Blues ground out a 2-1 win at St James' Park on Sunday. Yedlin deflected Marcos Alonso's shot into his own net in the 87th minute to settle a match that had threatened to end in frustration for Chelsea manager Maurizio Sarri. Earlier, Chelsea needed a penalty from Eden Hazard to finally breach a black and white wall erected by manager Rafa Benitez, whose defensive approach succeeded for 76 minutes. The Newcastle manager acknowledged the massive gap in quality between the two sets of players, packing his defence and granting Chelsea the ball for 80 per cent of the game. It was the possession that they were unable to turn into goals until Fabian Schar's challenge on Spanish defender Alonso produced a penalty.

Newcastle responded with a goal from Joselu in a rare attack and looked set to steal a point before Chelsea's last-gasp winner made it three successive victories for the Blues.

Benitez will say his approach was justified and it acknowledged the gap in quality between the two squads.

Before this game he earmarked Sarri's team as genuine title candidates and even gave them the edge over Manchester United, Tottenham and Arsenal, so Benitez was never likely to go toe-to-toe with Chelsea.

Jorginho, a player Benitez bought while he was in charge of Napoli, prompted intelligently in midfield and Hazard, starting for the first time this season, twisted and turned as he probed for a gap in Newcastle's defence that often featured nine men in front of keeper Martin Dubravka.

But too often, Chelsea failed to find a way through and were particularly frustrated in the first 45 minutes.

Hazard placed two shots wide, while Antonio Rudiger and Pedro was also off-target before Pedro finally forced Dubravka to make a save.

It was a satisfying half for Benitez, who saw his side create two opportunities on the break when Kepa Arrizabalaga had to save from Jacob Murphy and Salomon Rondon wasted an excellent chance by heading wide.

At the interval, Newcastle must have sensed they could collect at least a point, a target that appeared to be more difficult before the start when Benitez was forced to rule out two of his most influential players, Jamaal Lascelles and Jonjo Shelvey.

The official line was that both were injured, although there were unconfirmed rumours that a training ground argument between Lascelles and Benitez had prompted the manager to leave him out.

Benitez insisted, however, "Shelvey has been playing with pain, we tell him you cannot carry on with pain because it will stop him. Jamaal came in with ankle problem."

It meant four of Newcastle's summer signings were starting a game for the first time in a line-up and two of them -- Schar and Federico Fernandez -- were at the heart of Newcastle's defence.

Both performed well, particularly in the second half when the pattern was the same but Chelsea delivered more crosses towards Alvaro Morata as they started to run out of patience.

Rudiger almost made the breakthrough when he powered a shot against the bar in the 72nd minute, shortly before Hazard's penalty.

Even the most optimistic Newcastle supporter must have feared the worst, but Joselu's 83rd minute header offered them hope before Chelsea won it in dramatic fashion.

Newcastle United English Premier League Eden Hazard Football
Get the latest updates on IPL 2020, check out the IPL Schedule for 2020 and Indian Premier League (IPL) Cricket live score . Like us on Facebook or follow us on Twitter for more sports updates. You can also download the NDTV Cricket app for Android or iOS.