Victory kept Chelsea's outside chances of chasing down Tottenham Hotspur for a place in next season's Champions League alive. 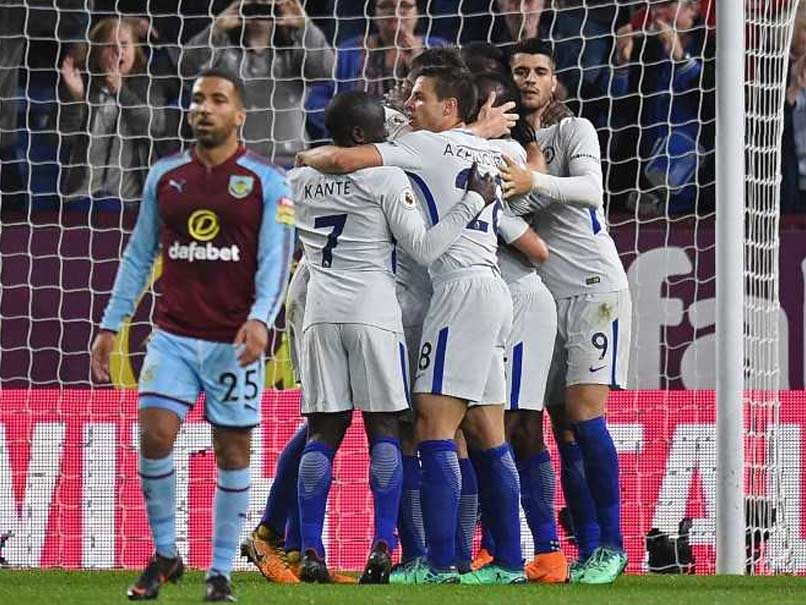 Chelsea moved to within five points of 4th-placed Tottenham with the win over Burnley.© AFP

Chelsea manager Antonio Conte defended misfiring striker Alvaro Morata despite the Spaniard missing a host of chances in a 2-1 win against Burnley in a Premier League match on Thursday. Victory kept Chelsea's outside chances of chasing down Tottenham Hotspur for a place in next season's Champions League alive as they closed to within five points of their London rivals with four games remaining. Chelsea meet Southampton for the second time in eight days in a FA Cup semi-final on Sunday after Conte's side came from 0-2 down to win 3-2 at St. Mary's on Saturday.

And with the Cup representing Chelsea's last chance at silverware this season, the Italian left Eden Hazard and Willian on the bench as Olivier Giroud and Morata started together up front for the first time.

But Conte believes the Spaniard showed he and Giroud can work more often as a partnership.

"This is a really good option," said Conte. "In the past it was very difficult for me to try this option with the two strikers but they showed a great link and a great combination and at the same time they worked very hard for the team."

Burnley's opening day 3-2 win at Stamford Bridge was an early indicator as to how the season would develop for both sides with Sean Dyche's side now dreaming of qualifying for European competition for the first time since 1967.

However, Burnley's hopes of leapfrogging Arsenal into sixth were dealt a blow by a first defeat in seven games.

"We are not them, we are not close to them yet, but we have moved forward."

After making a smart save from Morata's first sight of goal, Pope could have done better when the opening goal arrived on 20 minutes as he punched Victor Moses's cross into the onrushing Kevin Long and the ball ricocheted off the defender into his own net.

Much worse was to come for Morata on the hour mark when he burst clear on goal, but, with just Pope to beat, side-footed wide of the target.

That miss looked like it could be the turning point in the game when four minutes later Burnley levelled in fortuitous fashion.

Just minutes later, though, Chelsea retook the lead when Moses fired in low at Pope's near post from Emerson Palmieri's cross.

At the other end of the table, Southampton crept closer to relegation as a 0-0 draw at Leicester leaves the Saints still four points off safety with just four games remaining to save themselves.

"We are not in the situation where we are downhearted," insisted Southampton manger Mark Hughes, who at least stopped a run of three straight league defeats since taking temporary charge until the end of the season.

And Hughes confirmed he will rest players for Sunday's showpiece semi-final with Premier League survival his priority.

"It's a quick turnaround to Sunday and a few of the boys looked a bit tired and leggy out there so we'll probably freshen it up and make changes."

Comments
Topics mentioned in this article
Chelsea Tottenham Hotspur Victor Moses Álvaro Morata English Premier League Football
Get the latest updates on ICC T20 Worldcup 2022, check out the Schedule and Live Score. Like us on Facebook or follow us on Twitter for more sports updates. You can also download the NDTV Cricket app for Android or iOS.