Premier League: Chelsea, in fifth, are hard on Tottenham Hotspur's heels in the battle for a top four finish. 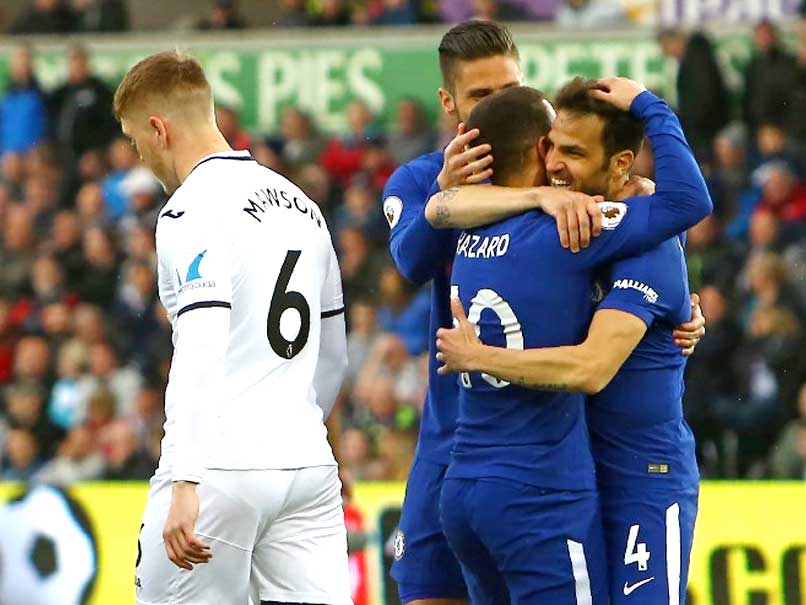 Cesc Fabregas scored the only goal of the match as Chelsea beat Swansea 1-0.© AFP

Chelsea kept alive their hopes of qualifying for the Champions League as Blues boss Antonio Conte claimed his 50th Premier League win thanks to a Cesc Fabregas rocket in Saturday's 1-0 success at Swansea City. Fabregas's fine strike came in the fourth minute and the midfielder's 50th Premier League goal was enough to give Chelsea their fourth successive victory in all competitions. Chelsea, in fifth, are hard on Tottenham Hotspur's heels in the battle for a top four finish. They trail fourth-placed Tottenham by two points ahead of their London rivals' clash with Watford on Monday.

Swansea remain firmly in relegation danger and Carlos Carvalhal's side are now only a point above Southampton, with a crunch battle looming against the Saints in the last week of the season.

Swansea will feel they might have had a penalty in the second half when Gary Cahill trod on substitute Nathan Dyer's foot, but referee Jonathan Moss waved away their claims.

There was also a late bust-up between the Chelsea skipper and Jordan Ayew after the Swansea striker shoved the defender in the back with a late challenge, although Cahill went down holding his head.

Chelsea went ahead with a goal of remarkable simplicity in the fourth minute, but which was all too easy for the liking of Carvalhal.

Andy King lost possession in midfield, which allowed Eden Hazard to dance around Ki Sung-Yueng and play in Fabregas who curled the ball first time beyond keeper Lukasz Fabianski.

It was Fabregas's first goal since August and both he and Hazard looked dangerous whenever they ran at a disorganised Swansea defence.

Swansea's best early opportunity came when Martin Olsson's swinging cross was met by Connor Roberts, but the full-back was unable to direct his header.

It was a rare attack from Swansea, who looked vulnerable in defence without injured skipper Federico Fernandez.

Victor Moses surged into the box and his shot was deflected for a corner from which Olivier Giroud's glancing header flew just wide.

Moss angered the home crowd with a series of decisions that went against them - most notably when a free-kick was given against Jordan Ayew, even though it was the Swansea striker who was hacked down.

Swansea found more attacking thrust at the start of the second half and Andre Ayew came close to an equaliser when he got on the end of Olsson's whipped cross but headed over.

Without loan striker Tammy Abraham, who wasn't eligible to face his parent club Chelsea, they lacked punch in the penalty area.

Giroud sent a header on target that Fabianski saved and Emerson also tested the Swansea keeper before Swansea next went near following a run to the byline by Dyer.

Andre Ayew then had Swansea's best chance of an equaliser when he made room for himself on the edge of the box, rounded Cahill, but curled his shot wide of the far post.

Chelsea looked shaky and survived a penalty appeal when Gary Cahill stepped on the foot of Dyer, but was considered to have played the ball first.

Comments
Topics mentioned in this article
Chelsea Tottenham Hotspur Eden Hazard Cesc Fàbregas English Premier League Swansea City Football
Get the latest updates on IPL 2021, check out the IPL 2021 Schedule and Indian Premier League Live Score . Like us on Facebook or follow us on Twitter for more sports updates. You can also download the NDTV Cricket app for Android or iOS.