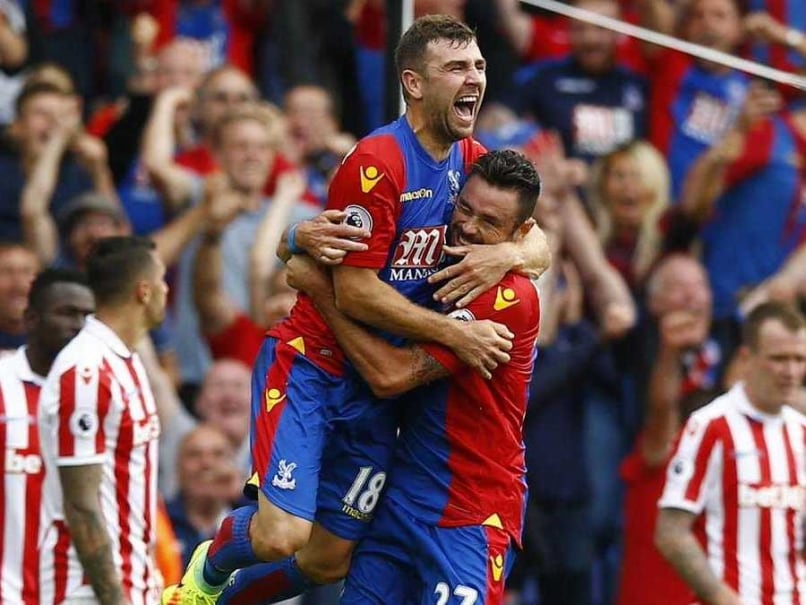 Andros Townsend scored one goal and made another as Crystal Palace inflicted a crushing 4-1 defeat over winless Stoke City in the Premier League on Sunday.

Townsend set up the opening goal for James Tomkins at Selhurst Park and completed the scoring with his first Palace goal after Scott Dann and James McArthur had also got on the score-sheet.

It gave Alan Pardew's side consecutive league wins for the first time since last December and saw the south London club climb to eighth place in the table.

Mark Hughes's Stoke, who replied through Marko Arnautovic, were left bottom of the pile after registering four successive league defeats for the first time since February 2012.

Palace manager Pardew made just one change from his side's 2-1 win at Middlesbrough, Tomkins replacing Damien Delaney at centre-back, and it proved a winning one.

With eight minutes gone, Townsend floated a free-kick towards the far post and Tomkins crept in behind Jonathan Walters to toe the ball past Shay Given from close range.

Once renowned for the rigour with which they defended set-pieces, Stoke conceded another goal from a dead-ball situation just three minutes later.

Jason Puncheon drove a right-sided corner towards the penalty spot and Dann got above Ryan Shawcross to sent a header bulleting into the bottom-left corner.

Stoke's response, such as it was, was tame, with Wilfried Bony meekly curling wide.

Tomkins limped off at half-time and was replaced by Delaney, but it did not affect the hosts' rhythm.

After Dann and Wilfried Zaha had seen efforts blocked at close range, McArthur added a third goal in the 72nd minute, beating Given with the aid of a deflection off Geoff Cameron.

Townsend saved the best for last, drifting infield from the left, beating Joe Allen with a neat chop and then bending a low shot into the bottom-right corner.

Arnautovic curled in a goal for Stoke from the edge of the box in injury time, but by then the damage had been done.

Comments
Topics mentioned in this article
Crystal Palace Stoke City Andros Townsend James Tomkins English Premier League Football
Get the latest updates on ICC T20 Worldcup 2022 and CWG 2022 check out the Schedule, Live Score and Medals Tally. Like us on Facebook or follow us on Twitter for more sports updates. You can also download the NDTV Cricket app for Android or iOS.