Arsenal turned on the style against Fulham, recording their biggest win of the season. 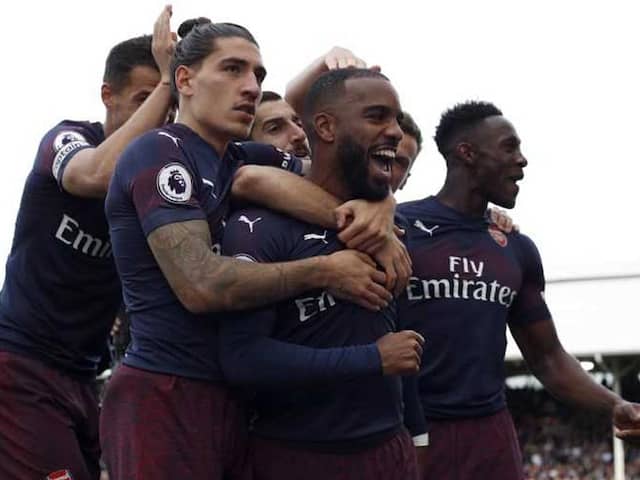 Arsenal swaggered to a ninth successive win as Alexandre Lacazette's double and a goal of the season contender from Aaron Ramsey inspired a 5-1 rout of Fulham on Sunday. Unai Emery's side turned on the style on the banks of the River Thames, recording their biggest win of the season as the resurgent Gunners moved into the Premier League's top four. Lacazette was at the centre of Arsenal's powerful show at Craven Cottage, with his superb second-half strike restoring their lead after Andre Schurrle had cancelled out his opener.

Pierre-Emerick Aubameyang netted twice in the closing stages as Arsenal won six consecutive Premier League matches within a single campaign for the first time since 2016.

They have also recorded three consecutive away league victories for the first time in two years.

Emery was expected to need a long period to revive Arsenal after the depressing final years of the Wenger era.

But the north Londoners are quickly rediscovering their verve and struggling Fulham had no answer to their enterprising display.

Arsenal were battling fatigue after touching down in London in the early hours of Friday morning following a 4,000km flight from Azerbaijan, where they beat Qarabag 3-0 in the Europa League on Thursday.

But Emery freshened up his side with six changes, although one was enforced as Mesut Ozil was sidelined due to a back spasm, and there were no signs of fatigue as they took the lead in the 29th minute.

Alex Iwobi was the catalyst with a clever pass to Nacho Monreal.

Monreal clipped his cross into Lacazette and the French striker left Tim Ream flat-footed with a nimble turn and close-range strike for his fourth goal of the season.

Fulham are the only side in the Premier League yet to keep a clean sheet this season and it was easy to see why as Arsenal carved holes in the hosts' creaky five-man defence.

Arsenal were close to a second goal as they again exploited the space behind wing-back Cyrus Christie, with Henrikh Mkhitaryan's effort well saved by Marcus Bettinelli.

Fulham hit back against the run of play in the 44th minute.

Unhinged by Monreal's wasteful pass, Arsenal were out of position as Luciano Vietto slipped a pin-point pass to Schurrle, who caught Rob Holding ball-watching as he sprinted through to chip a fine finish over Bernd Leno for his third goal this season.

Undeterred, Arsenal stepped on the gas after the interval and Lacazette restored their lead in the 49th minute.

Danny Welbeck headed onto Lacazette and he took Bettinelli by surprise with a powerful 20-yard drive that flashed past the newly called-up England keeper.

Aubameyang and Ramsey had both been left on the bench, but Emery introduced them for the final half hour in a bid to kill off Fulham.

It proved an inspired move as Ramsey sealed the points with a majestic finish in the 67th minute.

A flowing attack saw Hector Bellerin and Ramsey combined in a blur of flicks and delicate touches in midfield before the ball was worked wide to Aubameyang.

Aubameyang whipped over a low cross that was slightly behind Ramsey, prompting a superb adjustment from the Wales midfielder as he guided a back-flicked shot into the far corner.

Aubameyang put the seal on Arsenal's stroll in the autumn sunshine in the 79th minute, deftly converting Bellerin's cross.

The Gabon striker wasn't finished yet and, in the last minute, he smashed in Ramsey's pass for his sixth goal of the season.

No wonder jubilant Gunners crammed into one corner of Craven Cottage celebrated the goal with chants of "We've got our Arsenal back".

Alexandre Lacazette Pierre-Emerick Aubameyang Aaron Ramsey André Schurrle English Premier League Fulham vs Arsenal, Game week 8 Football
Get the latest Cricket news, check out the India cricket schedule, Cricket live score . Like us on Facebook or follow us on Twitter for more sports updates. You can also download the NDTV Cricket app for Android or iOS.