Mikel Arteta said that Pierre-Emerick Aubameyang needs to feel that staying at Arsenal is the right next step in his career. 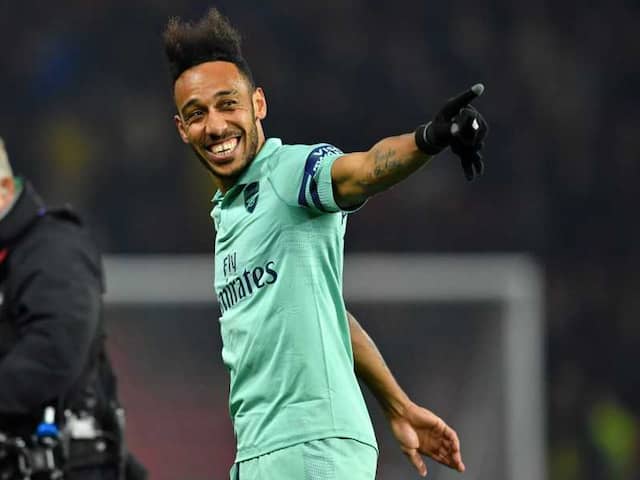 Pierre-Emerick Aubameyang has been linked with clubs like Chelsea, Real Madrid and Barcelona.© AFP

Mikel Arteta believes Pierre-Emerick Aubameyang can be convinced to stay at Arsenal despite the Gabon striker's admission that he faces a tough decision over his future. Aubameyang is out of contract in June 2021 and is yet to sign a new deal at the Premier League club. Linked with Barcelona, Real Madrid and Chelsea, Aubameyang, who turns 31 on Thursday, has hinted he could consider leaving north London if Arsenal cannot match his ambitions. Aubameyang, who has scored 61 goals in 97 appearances for the club, was quoted this week as saying he felt he was at a "turning point" in his career.

"Arsenal hold the keys for my extension," he told French football programme Telefoot. "It's up to them to do their job and then we'll see how things go."

He added: "It will be a very tough choice to make... It could be the most important choice of my career but nothing is decided for now."

However, Arteta is adamant Aubameyang is happy at Arsenal and the Spaniard accepts it is up to him to show his star striker it is the right decision to stay at the Emirates.

"I think it is our responsibility to make him feel that this is the right next step in his career," Arteta told reporters in a video press conference on Monday.

"He really needs to believe we can take this club forward the way we want to do. He is going to be a key player to do that."

Arteta said he was "extremely happy" with how Aubameyang had been performing.

"I have a really good relationship with him," said the Arsenal boss. "We can discuss face to face a lot of things. So far I think he is really happy at the club.

"We have many discussions with Pierre, his family and his agent. I am pretty positive we can find the right agreement for all parties."

Arsenal, who sit ninth in the Premier League ahead of Wednesday's restart at Manchester City, are some way short of that level at present.

If Aubameyang does not commit his future to the club soon, Arsenal could look to sell him in order to avoid losing him for free at the end of next season.

Arteta acknowledged Champions League action would be attractive to Aubameyang, but he still believes Arsenal can sign and keep top players despite their current reduced status.

"I think that would help to persuade anybody," he said. "But we are very lucky to have the club that we have. A lot of players want to come and join us.

"It's not just about who we can attract, it's how happy are the players who are here and how convinced they are that they are at the right place.

"It is almost our obligation to be fighting for every trophy and to be in the Champions League with this club."

Arsenal Mikel Arteta Pierre-Emerick Aubameyang English Premier League Football
Get the latest updates on IPL 2020, check out the IPL Schedule for 2020 and Indian Premier League (IPL) Cricket live score . Like us on Facebook or follow us on Twitter for more sports updates. You can also download the NDTV Cricket app for Android or iOS.