"He's One Of The Best": Alexandre Lacazette Wants Arsenal To Keep Pierre-Emerick Aubameyang

Alexandre Lacazette said that Pierre-Emerick Aubameyang has been Arsenal's best player this season. 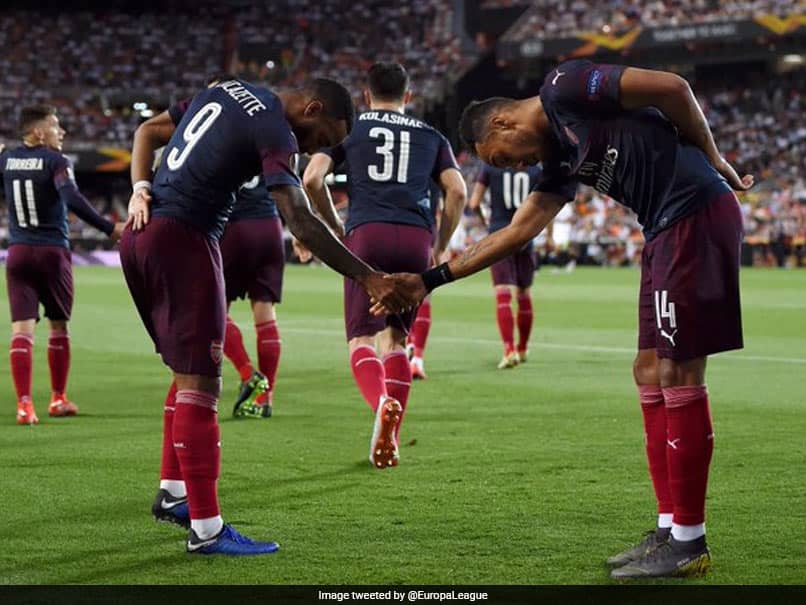 Alexandre Lacazette says it is crucial that Arsenal keep hold of fellow forward Pierre-Emerick Aubameyang, who has been linked with a move away from the Emirates. Arsenal's results have picked up since Mikel Arteta took over from Unai Emery in December but they are still seven points off fourth-placed Chelsea in the Premier League. Winning the Europa League would offer the club an alternative route into the Champions League next season. Arsenal take on Olympiakos on Thursday with a 1-0 lead after last week's first leg in Greece.

Qualifying for the Champions League would be a major boost to their hopes of keeping Premier League joint top-scorer Aubameyang, who has been linked with a move to Barcelona or Inter Milan.

"He's one of the best or maybe he's been the best player this season for Arsenal. Obviously I hope he's going to stay."

He added: "I think people should talk more about Auba and what he is doing in the game because he is more than a goalscorer.

"He is working a lot for the team defensively and making space for the other striker, Eddie (Nketiah) or me, and I think if we start to win more trophies, people will talk more about what he is doing for the team."

Arteta acknowledged after Arsenal's 3-2 win against Everton on Sunday that Aubameyang had not found it easy to cope with Arsenal's reduced status since he arrived from Borussia Dortmund and he hopes a surge up the table will show the club's potential.

Lacazette has been struggling for form in recent weeks and has lost his place to youngster Eddie Nketiah for the past two Premier League games.

He scored off the bench in the recent win over Newcastle before netting the only goal in the 1-0 Europa League round-of-32 victory in Greece last week.

They are his only two goals since mid-December and he has been linked with a move away from the Emirates Stadium.

But the Frenchman said he would not push to leave Arsenal at the end of the season even if they do not qualify for the Champions League.

Despite reports he has an agreement with the club that he can leave if they are unable to secure a return to Europe's top club competition, the 28-year-old said he has no desire to move.

"I didn't know about this," Lacazette replied when asked about the reported exit clause.

"I did not know. Yes, I have a contract with the club so there is no point for me to leave. Everybody is happy with me at the club."

Alexandre Lacazette Pierre-Emerick Aubameyang Football
Get the latest updates on IPL 2020, check out the IPL Schedule for 2020 and Indian Premier League (IPL) Cricket live score . Like us on Facebook or follow us on Twitter for more sports updates. You can also download the NDTV Cricket app for Android or iOS.