Arsenal remain fourth, but they are ahead of fifth-placed Chelsea only on goal difference as the race to qualify for Champions League heats up. 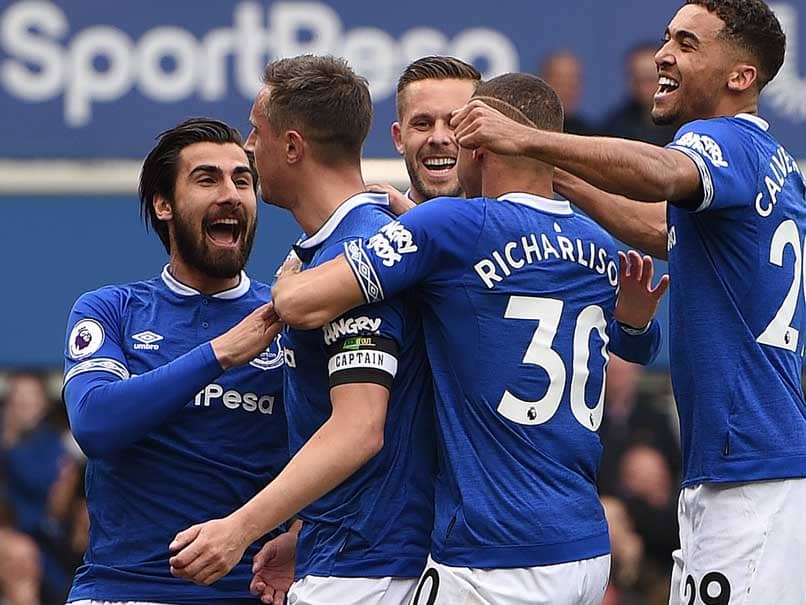 Phil Jagielka scored in the 10th minute for Everton.© AFP

Arsenal were haunted by their dismal away form yet again as Phil Jagielka gave Everton a 1-0 victory that dented the Gunners' Premier League top-four bid on Sunday. Jagielka was only drafted into Everton's starting line-up at the last minute due to an illness suffered by Michael Keane. The Everton defender made the most of his call-up with the game's only goal in the early stages at Goodison Park. It was another away-day flop for Arsenal, who maintained their wretched record as the only club in the top four divisions of English football not to have kept a clean sheet on their travels this season.

Unai Emery's side remain fourth in the Premier League, but they are ahead of fifth-placed Chelsea only on goal difference as the race to qualify for the Champions League heats up.

Everton had already threatened from one of Lucas Digne's long throw-ins before the full-back delivered the set-piece that led to Jagielka's opening goal on 10 minutes.

His throw was flicked on by Jagielka himself, for Dominic Calvert-Lewin to attempt a header on goal that led to the ball taking a kindly bounce, falling to the unmarked defender who swept the ball in with the minimum of fuss from close range.

There were Arsenal appeals for offside, and television footage seemed to show that Digne's foot might have been over the line in the process of taking his all-important throw.

But it was certainly a dramatic intervention from Jagielka, who had only been called into the team minutes before kick-off.

Jagielka, 36, has suffered a difficult season at Goodison, with a series of knee problems limiting him to three starts, but his impact on this occasion could not have been greater, or much quicker.

It was also the former England international's first goal since April 2017 as he became the oldest player to score in the Premier League this season.

An early attack by Alexandre Lacazette had ended with a low shot skidding just beyond the far post but, as Arsenal's tendency to reserve their worst performances for away games looked like continuing, it was Everton who grew in confidence.

Not that they overly troubled Bernd Leno in the visitors' goal.

Gylfi Sigurdsson did manage to produce his side's second shot on target before the half-time whistle.

That was enough for Emery who, acknowledging his own pre-match selection gamble had failed, sent on Aaron Ramsey and Pierre-Emerick Aubameyang at the interval, resulting in an almost immediate improvement.

A cross from the latter was punched clear weakly by Jordan Pickford, offering the ball up to Ramsey who volleyed over the open goal from 12 yards.

Aubameyang went close as he met Shkodran Mustafi's chip forward but failed to get enough power behind his header.

Despite the second-half improvement from the visitors, Everton maintained their own attacking impetus.

A poor header from Ainsley Maitland-Niles let Bernard close in on the Arsenal goal, where Leno was required to block well.

With Richarlison and Sigurdsson becoming increasingly influential, a second Everton goal beckoned, especially when the Brazilian's cross picked out his Icelandic team-mate, who shot straight at Leno.

And the home side really should have doubled their lead on 73 minutes when a Sigurdsson shot was charged down by Sokratis and Richarlison sliced the rebound well wide from a promising position.

But Everton, who won against top-six opposition for the first time in 26 games on their last home match against Chelsea, still managed to repeat that feat with the minimum of late scares.

A long shot from Henrikh Mkhitaryan that bounced wide after 70 minutes proved to be Arsenal's last throw of the dice.

Everton Phil Jagielka English Premier League Football Everton vs Arsenal, Game week 33
Get the latest updates on India vs Australia Series, check out the India vs Australia Schedule for 2020-21 and Ind vs Aus live score . Like us on Facebook or follow us on Twitter for more sports updates. You can also download the NDTV Cricket app for Android or iOS.