Pep Guardiola suggested that it would be foolish to rule out Tottenham, Chelsea or even fifth-placed Manchester United in the title race. 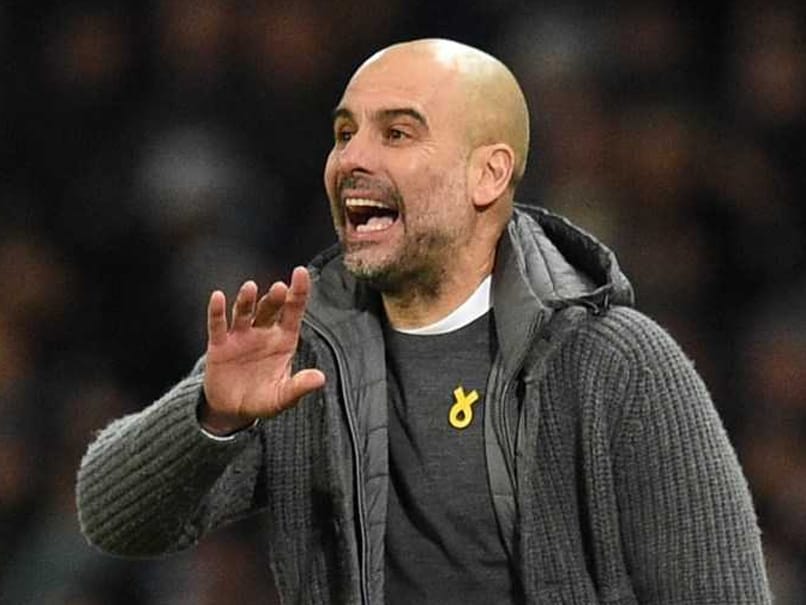 Pep Guardiola feels there will be plenty more twists before the end of the season.© AFP

Pep Guardiola has played down the suggestion that Manchester City are now Premier League title favourites despite two stumbles in as many games by leaders Liverpool that cut the gap at the top to three points. Jurgen Klopp's side could have gone seven points clear by beating Leicester last week, but only drew 1-1 and were held by the same scoreline at West Ham on Monday. Those two draws have allowed City back into the race, and having beaten Arsenal 3-1 on Sunday, the champions will go top on goal difference if they win at Everton on Wednesday.

However, after a topsy-turvy week that began with City falling to a shock 2-1 defeat at relegation-threatened Newcastle last Tuesday, Guardiola is sure there will be plenty more twists before the end of the season.

"Three or four days ago, we were already done, and the champions were Liverpool. Now we are the favourites and maybe soon we can be leading. We try to be calm.

"There will be surprises and it will be tough for teams to win every game. The contenders and the non-contenders have the ability and skills to create problems.

"What I'm more concerned about is that we never forget who we are as a team. Doing what we have to do, we are a strong team. That's what I want to watch every single day.

"After that, we see about the results, the table, the favourites and this kind of thing."

City won the title last season with a Premier League record total of 100 points last season, but Guardiola sees that kind of dominance as an anomaly in English football.

"I would say it's typical in England, this kind of situation," he said of this season's close fight.

"What's not common is what happened last season, where we win 18 games in a row, with 100 points and a lot of distance (to the team in second place).

"Normal is what happens now, where every game is tough –- and you can win or lose every single game, because every team is either involved in the title, or Europe, or in trying to stay in the Premier League."

Guardiola also suggested that it would be foolish to rule out Tottenham, Chelsea or even fifth-placed Manchester United in the title race.

Spurs are two points behind City, in third, and five points off the lead, with Chelsea 12 points from top spot and United 14 points adrift.

"Now people see the table, and see the first two or three, and don't look further than that.

"Chelsea can win a few games in a row and be a contender. There are 39 points to play for. Everyone is ready to take points."

Everton boss Marco Silva is under pressure to spring a surprise on Wednesday after winning just three of their last 12 league matches, and suffering an FA Cup fourth-round exit at Championship side Millwall.

But Guardiola believes the Toffees must be patient and give the Portuguese coach time.

Tottenham Hotspur English Premier League Pep Guardiola Football
Get the latest updates on ICC Women's Cricket World Cup 2022 and IPL 2022, check out the Schedule , Live Score and IPL Points Table. Like us on Facebook or follow us on Twitter for more sports updates. You can also download the NDTV Cricket app for Android or iOS.