Manchester United moved into fourth place in the Premier League, one point above Chelsea, who face Manchester City on Sunday. 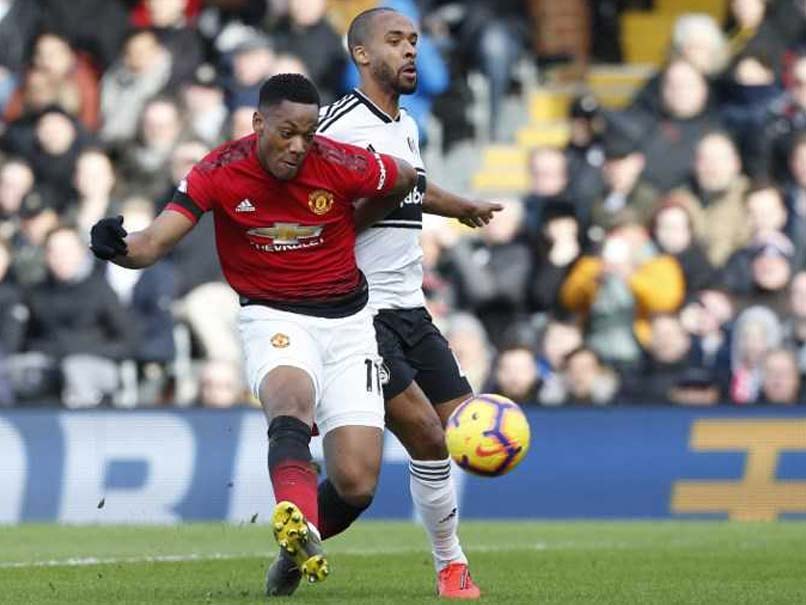 Anthony Martial stole the show, racing over half the length of the pitch before finishing emphatically.© AFP

Manchester United swept into fourth place in the Premier League as Anthony Martial's sublime strike inspired their 3-0 win over struggling Fulham on Saturday. Ole Gunnar Solskjaer's side took the lead through Paul Pogba's clinical finish early in the first half at Craven Cottage. But it was Martial who stole the show as the winger raced over half the length of the pitch before finishing emphatically to double United's lead before half-time. That swaggering solo effort was followed by the influential Pogba's second-half penalty as United moved into fourth place, one point above Chelsea, who face Manchester City on Sunday.

Meanwhile, Liverpool regained top spot in the Premier League by getting back to winning ways as goals from Sadio Mane, Georginio Wijnaldum and Mohamed Salah secured a comfortable 3-0 win over Bournemouth on Saturday.

But Liverpool took full advantage of their game in hand over the champions to open up a three-point lead and put the pressure back on City when they host Chelsea on Sunday.

Winners of six consecutive away games in all competitions for the first time since May 2009, United are firmly in the hunt for a top four finish after trailing 11 points behind those places on the day Jose Mourinho was sacked in December.

They have won 10 of 11 matches in all competitions since Solskjaer replaced Mourinho as interim boss.

United remain unbeaten under their former striker Solskjaer, who has lifted the gloom from the unlamented Mourinho's divisive reign and put himself in contention to land the job on a permanent basis.

United's stroll by the banks of the River Thames was the perfect preparation for their Champions League last 16 first leg against Paris Saint Germain at Old Trafford on Tuesday.

Fulham are second bottom having lost five of their last six league games and face a daunting task to avoid relegation.

With United's clash against PSG on his mind, Solskjaer made six changes, leaving out Marcus Rashford, Jesse Lingard and Victor Lindelof.

Those switches left United looking uncertain in the opening moments and Luciano Vietto reached Andre Schurrle's cross, only to scuff his half-volley wide when he should have hit the target.

Schurrle fired over from close-range after Alexsandar Mitrovic harried Chris Smalling into another mistake moments later.

But on a blustery afternoon, United had riden their luck and were about to blow Fulham away.

They took the lead with a superbly constructed goal that exposed the Premier League's leakiest defence in the 14th minute.

Ander Herrera deftly evaded a sliding lunge from Jean-Michael Serri and picked out Martial on the edge of the Fulham area.

Martial's perfectly-weighted pass caught Fulham flat-footed and Pogba took Sergio Rico by surprise with a fierce strike from a tight angle that flashed past the Fulham keeper at his near post.

It was Pogba's seventh goal since Solskjaer took charge, underlining how the France star has come out of his shell following the departure of his nemesis Mourinho.

Since Solskjaer's arrival, Pogba, now deployed in a free-roaming role that better suits his personality, has been directly involved in more goals, either scoring or assisting, than any other Premier League player.

Yet Pogba was reduced to the role of admiring spectator for once when his compatriot Martial doubled United's lead in the 23rd minute.

Jones started the electric counter-attack, winning possession and spreading the ball wide to Martial just inside the United half.

Fulham had thrown too many players forward and they were ruthlessly punished.

Martial accelerated past Maxime Le Marchand and left Denis Odoi trailing in his wake before bending a fine finish into the far corner.

Martial, another United star who felt slighted by Mourinho's acerbic tongue, is back to his best and his 11th goal of the season was the perfect way to celebrate signing a new five contract recently.

With Fulham impotent in attack, boss Claudio Ranieri was jeered when he replaced Schurrle with defender Cyrus Christie early in the second half.

United piled on the misery for Ranieri in the 65th minute.

Paul Pogba English Premier League Fulham vs Manchester United, Game week 26 Football
Get the latest updates on ICC Women's Cricket World Cup 2022 and IPL 2022, check out the Schedule , Live Score and IPL Points Table. Like us on Facebook or follow us on Twitter for more sports updates. You can also download the NDTV Cricket app for Android or iOS.