Marcus Rashford's 93rd minute strike beat Wolves 1-0 to move Manchester United into second in the Premier League as fears over the continuation of the season due to rising coronavirus infection rates grew on Tuesday. 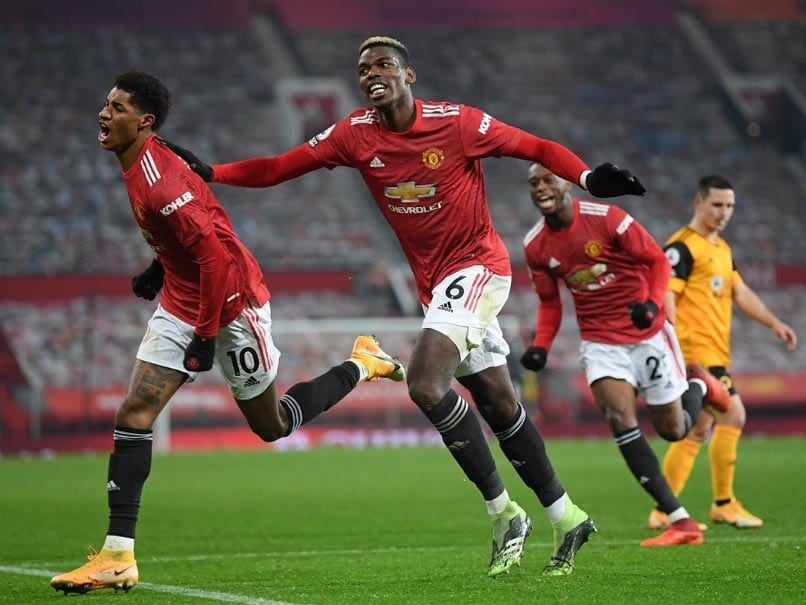 Marcus Rashford's 93rd minute strike beat Wolves 1-0 to move Manchester Unitedinto second in the Premier League as fears over the continuation of the season due to rising coronavirus infection rates grew on Tuesday. A record 18 positive tests for Covid-19 among players and staff were detected in the weekly round of testing. After Manchester City's trip to Evertonon Monday was postponed due to a Covid outbreak in Pep Guardiola's squad, all five matches scheduled for Tuesday went ahead despite disruption for Sheffield United and Southampton.

Bottom-of-the-table United revealed they had suffered a number of positive cases but were still able to field a squad of 18 for their 1-0 defeat at Burnley.

Southampton manager Ralph Hasenhuttl coached his side from his home for a 0-0 draw against West Ham after a member of his household tested positive.

The Telegraph reported the Premier League will discuss plans for a two-week circuit breaker with infection rates soaring across England.

However, Manchester United boss Ole Gunnar Solskjaer called for the competition to continue.

"I'm not sure if stopping playing football will make a difference," said Solskjaer, whose side are mounting an unexpected title challenge after a slow start to the season.

"In our bubble we've proven to be quite (safe), we haven't had too many cases transmitting within the group."

On the field, United were fortunate to escape with all three points against a youthful Wolves side, who were in action just 48 hours ago against Tottenham.

In keeping with several meetings between the sides in recent years, chances were few and far between.

But United answered Solskjaer's call to win more games late on in the style he did as a player during Alex Ferguson's time at Old Trafford as Rashford's shot took a wicked deflection off Romain Saiss deep into stoppage time.

"This is a big step forward that you don't perform, but you still win," added Solskjaer.

- Winning the best medicine for Arsenal -

Arsenal eased fears they could be dragged into a relegation battle with a 3-1 win over Chelsea on Saturday and can now look up the table with hope thanks to Alexandre Lacazette's winner in a 1-0 victory at Brighton.

Pierre-Emerick Aubameyang returned from injury in the place of Lacazette in the only change made by Arteta.

Victory moves the Gunners up to 13th, within six points of the top six.

"The best medicine is wins. When you win it's a different story and the picture looks better at the moment," said Arteta.

West Brom are next up for Arsenal at the weekend and the Baggies confidence after a shock 1-1 draw at Liverpool on Sunday quickly evaporated in a 5-0 hammering by Leeds.

A miserable night for West Brom started with a self-inflicted wound as Romain Sawyers scored a remarkable own goal as his backpass sailed past Sam Johnstone.

Ezgjan Alioski, Jack Harrison and Rodrigo made it 4-0 before half-time and Raphinha's powerful strike into the top corner inflicted Sam Allardyce's heaviest ever home defeat as a Premier League manager.

Allardyce said new recruits in the January transfer window were now a "necessity" with West Brom five points from safety.

Sheffield United are the only side below West Brom in the table and their chances of survival are diminishing rapidly with just two points from their opening 16 games.

Blades manager Chris Wilder said "a couple of players were missing through illness" plus "four or five backroom staff have tested positive".

Ben Mee scored the only goal at Turf Moor as Burnley moved five points clear of the relegation zone and above Brighton into 16th.

Southampton missed the chance to move into the top four as they failed to score for the third consecutive game in a 0-0 draw with West Ham.

Wolverhampton Marcus Rashford English Premier League Football
Get the latest updates on ICC Women's Cricket World Cup 2022 and IPL 2022, check out the Schedule , Live Score and IPL Points Table. Like us on Facebook or follow us on Twitter for more sports updates. You can also download the NDTV Cricket app for Android or iOS.