Before this, West Ham had only won one of their previous 19 Premier League matches against Manchester United. 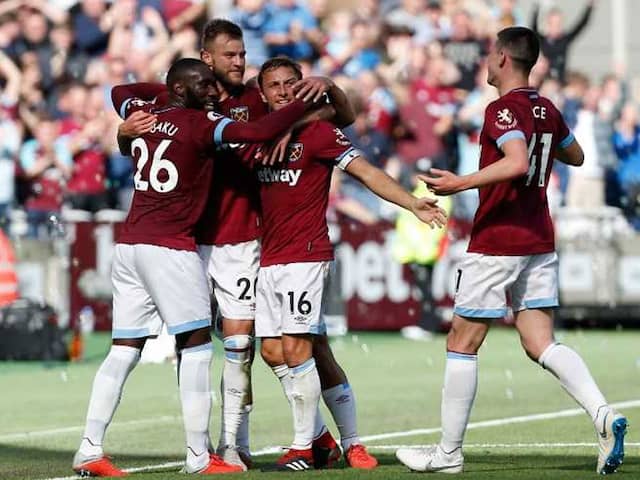 Manchester United's dire week ended in a damaging 1-3 defeat at the hands of West Ham on Saturday as Jose Mourinho failed to arrest a growing sense of crisis surrounding the club. Manchester United, who kicked off eight points behind leaders Liverpool, already look out of the Premier League title race and a rift between the manager and Paul Pogba is overshadowing events on the pitch. West Ham had only won one of their previous 19 Premier League matches against Manchester United but an early strike from Felipe Anderson and a Victor Lindelof own goal shortly before half-time left the disjointed visitors with a mountain to climb.

Manchester United pulled a goal back through Marcus Rashford in the second half but Marko Arnautovic restored the two-goal cushion for West Ham minutes later.

Alexis Sanchez and Jesse Lingard were not in the matchday squad as Mourinho brought in Scott McTominay to play alongside Chris Smalling and Lindelof in a back three, leaving Manchester United short of attacking flair.

The home side dominated the opening minutes of the contest as Manchester United failed to find any rhythm in attack and looked shaky at the back.

West Ham were rewarded on five minutes when Mark Noble slid in Pablo Zabaleta down the right and the Argentine crossed for Anderson to flick the ball brilliantly past David de Gea with his heel.

Manchester United continued to labour but came agonisingly close to an equaliser midway through the half when Romelu Lukaku headed against the outside of the post after an inviting cross from Ashley Young.

They started seeing more of the ball but still struggled to create any meaningful chances and were punished just before half-time when an Andriy Yarmolenko shot looped into the net off Lindelof for an own goal.

Mourinho threw on Rashford shortly before the hour-mark and went close to pulling a goal back when Marouane Fellaini, operating in forward role, powered a header downward only to see Lukasz Fabianski pull off a fine stop.

Mourinho made a double substitution with about 20 minutes left on the clock, bringing off Pogba -- to a chorus of jeers from the home fans -- and Anthony Martial. Fred and Juan Mata were sent on to perform a rescue act.

Within seconds they had pulled a goal back when Rashford flicked home a Luke Shaw corner.

But the sense of hope did not last long as Arnautovic held his nerve to steer the ball past De Gea after a through ball from West Ham captain Mark Noble.

All eyes at the London Stadium were on Pogba after the French World Cup winner was stripped of the vice-captaincy before a League Cup defeat to Championship side Derby.

The following day Pogba was involved in a terse exchange with Mourinho on the training pitch, further evidence that the relationship between the pair is at breaking point.

The win for West Ham is a further sign Manuel Pellegrini's side have turned the corner after they started the season with four straight defeats in the Premier League.

The victory against Manchester United follows an away win against Everton and last week's hard-earned draw against Chelsea.

Paul Pogba Andriy Yarmolenko Felipe Anderson English Premier League Football
Get the latest Cricket news, check out the India cricket schedule, Cricket live score . Like us on Facebook or follow us on Twitter for more sports updates. You can also download the NDTV Cricket app for Android or iOS.