Premier League: Manchester City opened up a 15-point lead on top of the table with their 4-1 win against Wolves. 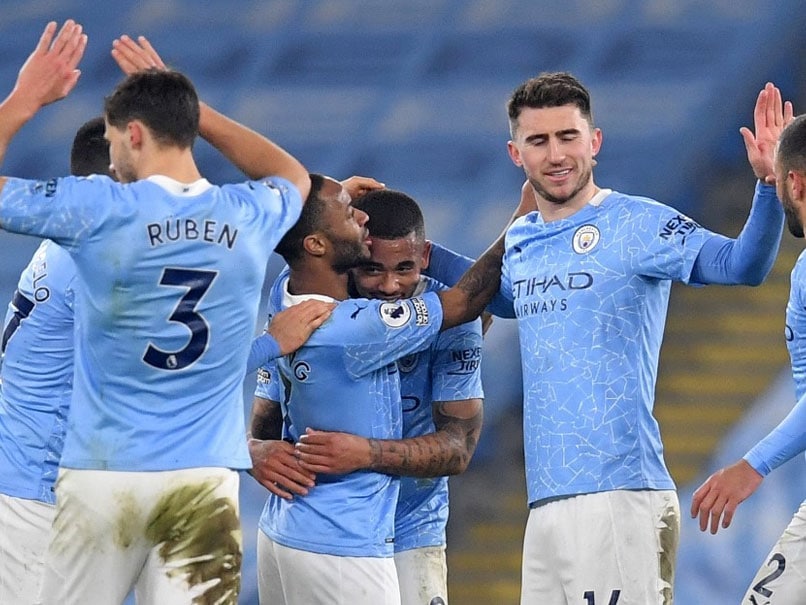 Manchester City equalled their club record of 28 games unbeaten on Tuesday, hammering Wolverhampton 4-1 to open up a gaping 15-point lead at the top of the Premier League. Pep Guardiola shuffled his pack at the Etihad against the team who did the league double against them last season as he maintained his club's assault on an unprecedented quadruple. The champions-elect were made to sweat after Conor Coady cancelled out an early own goal from Leander Dendoncker but two late goals from Gabriel Jesus and a Riyad Mahrez strike sealed the three points.

City's 28-match unbeaten run in all competitions equals their run from April to December 2017 and they are red-hot favourites to wrap up a third Premier League title in four years.

The victory was their 21st in a row and their 15th straight Premier League win.

City have not trailed for a single minute in any of their past 19 Premier League games -- equalling Arsenal's record set in 1998/99.

Guardiola hailed his "fantastic team" but said his only focus was on the next game, against cross-town rivals Manchester United, who are City's nearest challengers.

"After 1-1 we suffered but we created lots of chances in the end," he told BT Sport.

"Manchester United. That's all we care (about now)," he added. "The champions is Liverpool, the crown belongs to them. We are in the best position right now to take them out and we are going to try but they are the champions."

"There is 33 points to play for. Tomorrow our opponents will play, we have one or two days off and prepare for Manchester United at home."

The home side toyed with the visitors from the opening whistle, hogging possession as Wolves struggled to gain a foothold.

City's dominance was rewarded when Dendoncker could only steer the ball into his own net in the 15th minute.

Mahrez made an incisive run down the right, getting behind the City defence and was brilliantly picked out by midfielder Rodri.

The Algeria international whipped the ball across the face of goal and Dendoncker, with Raheem Sterling hovering menacingly behind him, inadvertently found the net.

Aymeric Laporte had an effort ruled out for offside and Bernardo Silva blazed over after Rui Patricio saved smartly from his header on the stroke of half-time.

City nearly doubled their lead early in the second half but Patricio was again impressive, making a fingertip save from a Kevin De Bruyne shot and pushing away a Mahrez effort.

But incredibly, Wolves were level just after the hour mark when Coady headed in Joao Moutinho's free-kick that was clipped into the box.

City upped the pressure and reclaimed the lead with 10 minutes remaining. Wolves failed to cut out a Kyle Walker cross and Jesus turned to smash home from close range.

Mahrez tucked home their third in the 90th minute to put the result beyond doubt and Jesus claimed a fourth with the final kick of the game.

City's winning streak is the third-best streak among teams in Europe's leading five leagues, behind only Bayern Munich's 23 in a row in 2020 and Real Madrid's 22 successive victories in 2014.

What is even more astonishing is that they started the season slowly, with many commentators forecasting the closest Premier League title race for years.

Instead, Guardiola's men are turning the race into a procession.

Riyad Mahrez Gabriel Jesus Leander Dendoncker Football
Get the latest updates on ICC T20 Worldcup 2022 and CWG 2022 check out the Schedule, Live Score and Medals Tally. Like us on Facebook or follow us on Twitter for more sports updates. You can also download the NDTV Cricket app for Android or iOS.