Manchester City remained on Liverpool's tails at the top of the Premier League by seeing off Burnley 2-0 at the Etihad thanks to goals from Bernardo Silva and Kevin De Bruyne on Saturday. 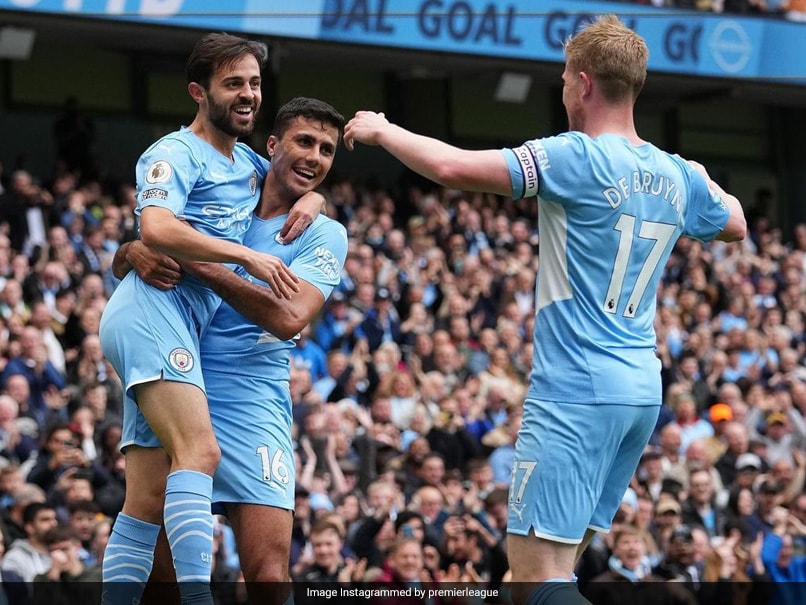 Manchester City remained on Liverpool's tails at the top of the Premier League by seeing off Burnley 2-0 at the Etihad thanks to goals from Bernardo Silva and Kevin De Bruyne on Saturday. Pep Guardiola's men were far from their fluent best, but did enough to remain just one point behind the leaders. Silva snapped up the rebound after Nick Pope denied Phil Foden early on before De Bruyne's blast made the game safe 20 minutes from time. Raheem Sterling's suggestion he could look to leave City if he is not afforded more minutes caught Guardiola unaware when he faced the media on Friday.

Guardiola responded by handing the England international a rare Premier League start this season among five changes from a 2-2 draw at Liverpool before the international break.

But Sterling struggled to make an impact in a disjointed first 45 minutes from the hosts.

The Portuguese started the move for the opening goal by picking out Foden at the edge of the area and when his shot was parried by Pope, Silva followed up to smash home the rebound.

Burnley had lost 5-0 on their four previous visits to the Etihad and Pope spread himself to save brilliantly from Joao Cancelo moments later to prevent the floodgates opening once more.

But it was the Clarets who came closest to scoring as the half-time whistle approached.

Maxwel Cornet scored four goals in three appearances for Lyon against City in the Champions League and the Ivorian should have been the scourge of the English champions again.

Zack Steffen, deputising for Ederson due to his late return from international duty with Brazil, saved a one-on-one with Cornet before the forward blasted a second attempt over.

Josh Brownhill then fired just wide a good chance to equalise before the break.

Burnley were also unfortunate when Aymeric Laporte was shown just a yellow card for a dangerous sliding challenge on Dwight McNeil.

City upped the tempo at the start of the second-half with Sterling restored to his favoured position on the left of the front three.

Riyad Mahrez hit the bar from Sterling's cut-back before Foden just did not get enough on an attempted lob over Pope.

The second goal City craved to make sure of the three points also had a hint of controversy.

Again Burnley were less than impressed with referee Martin Atkinson as Mahrez collided with Ashley Westwood to allow the ball to break to De Bruyne, who crashed the ball high past Pope.

Chris Wood should have halved the visitors' arrears when he blasted over with just Steffen to beat, but his lack of composure showed why Burnley remain without a league win this season.

Burnley Bernardo Silva Kevin De Bruyne English Premier League Football
Get the latest updates on IND vs NZ 2021, check out the Schedule and Live Score . Like us on Facebook or follow us on Twitter for more sports updates. You can also download the NDTV Cricket app for Android or iOS.