Manchester City twice came from behind to prevent Liverpool moving back to the top of the Premier League in a pulsating 2-2 draw at Anfield on Sunday. 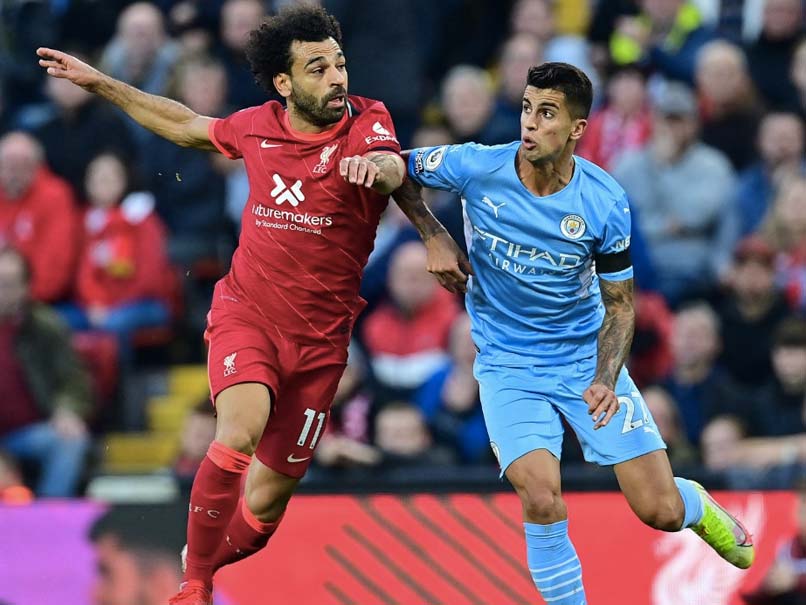 Mohamed Salah scored a goal and assisted another in Liverpool's 2-2 draw against Manchester City.© AFP

Manchester City twice came from behind to prevent Liverpool moving back to the top of the Premier League in a pulsating 2-2 draw at Anfield on Sunday. Liverpool weathered a City storm in the first-half and hit the English champions with a sucker punch when Sadio Mane opened the scoring just before the hour mark. Phil Foden levelled before Mohamed Salah looked to have won the game with a moment of individual brilliance as he jinked around four defenders before firing past Ederson. However, Kevin De Bruyne's shot that deflected in off Joel Matip nine minutes from time salvaged the point Pep Guardiola's men at least deserved.

A share of the spoils leaves the title race tantalisingly poised with Liverpool a point behind leaders Chelsea and City two points off the top in third.

It could have been much worse for City as a 0-0 draw at home to Southampton two weeks ago left them three points off the top of the table ahead of two of the most daunting away trips in the Premier League.

However, rather than being cut adrift from the contenders to take their title, they have laid down a marker in schooling Chelsea on their own patch and doing the same to Jurgen Klopp's men for the majority of a thrilling contest.

Guardiola's side won 4-1 when the sides met behind closed door last season, but City have still not won in front of a crowd at Anfield since 2003, long before an Abu Dhabi takeover transformed the club's fortunes.

They should have ended that run by putting the game beyond doubt in a dominant first-half when, not for the first time this season, they just lacked the finishing touch.

Foden had the majority of the chances before the break, but could not find a way past Alisson Becker.

The England international then had strong claims for a penalty or a red card against James Milner for a foul outside the box waived away by referee Paul Tierney.

De Bruyne headed over a glorious chance with Foden this time the creator before Alisson had to sprint off his line to block from Foden once more just before the break.

Liverpool were clinging on for the half-time whistle, but were able to reorganise themselves at the break to turn the game into a far more competitive contest in the second-half.

Mane hit City with the sucker punch as Salah skipped past Joao Cancelo and played in the Senegalese to slot calmly into the far corner.

Anfield was suddenly stirred and Liverpool's players crashed into challenges in response as they didn't allow City to get into the rhythm they enjoyed before the break.

However, one slick move from Guardiola's men finally saw them find the net to level 21 minutes from time.

Gabriel Jesus skipped across the face of the Liverpool box before finding Foden, who this time drilled the ball low into Alisson's far corner.

Guardiola was then infuriated as Milner avoided a second yellow card after chopping down Silva.

And moments his later his mood soured even more when Salah's stunning solo goal swung the game in Liverpool's favour.

The Egyptian danced around Cancelo, Silva and Aymeric Laporte before firing on his weaker right foot high past Ederson.

Guardiola was then booked for taking his protests too far, but five minutes later he was screaming in celebration as De Bruyne's effort from the edge of the box deflected in off Joel Matip.

Liverpool had the best chance to win the game in a breathless finale, but Rodri blocked Fabinho's goal-bound effort after Ederson flapped at a free-kick.

Earlier in the day, Tottenham beat Aston 2-1 at home while Brentford beat West Ham 2-1 away. Crystal Palace played out a 2-2 draw at home against Leicester City.

Manchester City Sadio Mane Mohamed Salah Phil Foden Kevin De Bruyne Football
Get the latest updates on India vs South Africa and check out  Schedule, Results and Live Score. Like us on Facebook or follow us on Twitter for more sports updates. You can also download the NDTV Cricket app for Android or iOS.