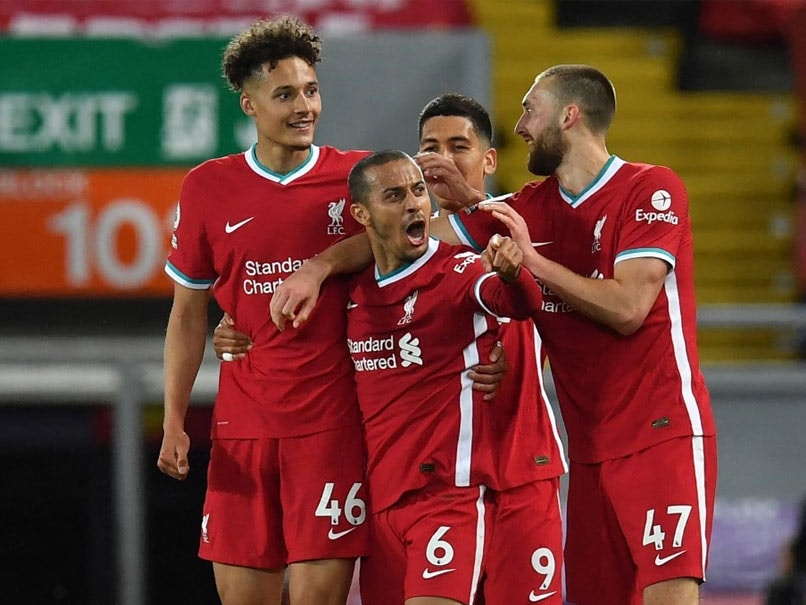 Thiago Alcantara scored for Liverpool in their 2-0 win over Southampton.© AFP

Liverpool kept alive their hopes of a top-four finish in the Premier League as Sadio Mane and Thiago Alcantara sealed a 2-0 win against Southampton on Sunday. Jurgen Klopp's side moved above Tottenham into sixth place thanks to Mane's first-half header and Thiago's first goal for the club in the final moments at Anfield. Liverpool's first victory in four games in all competitions leaves them six points behind fourth-placed Leicester with a game in hand in the race to qualify for next season's Champions League.

It was only their second league win at Anfield in their last 11 matches.

"We scored a really nice first goal but it's familiar for us now to not finish the game early," Klopp said.

"We had to stay in the game and scoring a wonderful second goal obviously was a big relief.

"The only way I know to win is to work really hard and that's what we did. We had to fight, we got the three points, really good."

Liverpool travel to second-placed Manchester United on Thursday for a crucial clash in their attempt to catch Leicester.

After the failed defence of the title they won last season, Liverpool would be delighted to salvage a troubled campaign with a top-four place.

To do that, they will probably need to win their last four games and hope Leicester and fifth-placed West Ham stumble in the final stretch.

"We are kind of (in the race). It's not impossible but it's difficult. We will give it a try and see where we get to," Klopp said.

Southampton, 10 points above the relegation zone with four matches left, have now lost 13 of their 17 league games since beating Liverpool in January.

The Saints have earned the fewest points and conceded the most goals in the Premier League in 2021.

Liverpool were quick to scent blood against opponents in such poor form and Mohamed Salah was denied by Fraser Forster after Mane poked the ball through to the Egyptian in the six-yard box.

Diogo Jota's stinging strike forced another good save from Forster before Salah tested the over-worked keeper from the resulting corner.

Georginio Wijnaldum guided a diving header against the bar as Liverpool kept up the pressure.

Southampton nearly snatched the lead against the run of play when Che Adams met Nathan Tella's low cross with a close-range effort that was well saved by Alisson Becker.

But 46 seconds later, Liverpool's dominant spell paid dividends as they broke away to take the lead in the 31st minute.

Salah clipped a cross to the far post and former Southampton forward Mane got behind the visitors defence to head home from close range.

Remarkably, it was the first time the duo had combined for a Premier League goal this season.

Tella should have cancelled out Mane's 14th goal of the season, but the unmarked winger headed straight at Alisson from Nathan Redmond's cross.

Jota's blast was pushed away by Forster early in the second half, but Liverpool weren't quite so cohesive after the break.

Alisson snuffed out Michael Obafemi's raid and then turned over Ibrahima Diallo's rocket from the edge of the area.

Adams had a golden opportunity to equalise in the closing stages after Alisson gifted him possession, but the striker's effort lacked the accuracy to beat the Brazilian.

Thiago English Premier League Football
Get the latest updates on T20 World Cup, check out the T20 World Cup Schedule and Live Score . Like us on Facebook or follow us on Twitter for more sports updates. You can also download the NDTV Cricket app for Android or iOS.