Virgil Van Dijk hobbled off after a shocking challenge from Everton goalkeeper Jordan Pickford in a 2-2 draw in the Merseyside derby on Saturday. 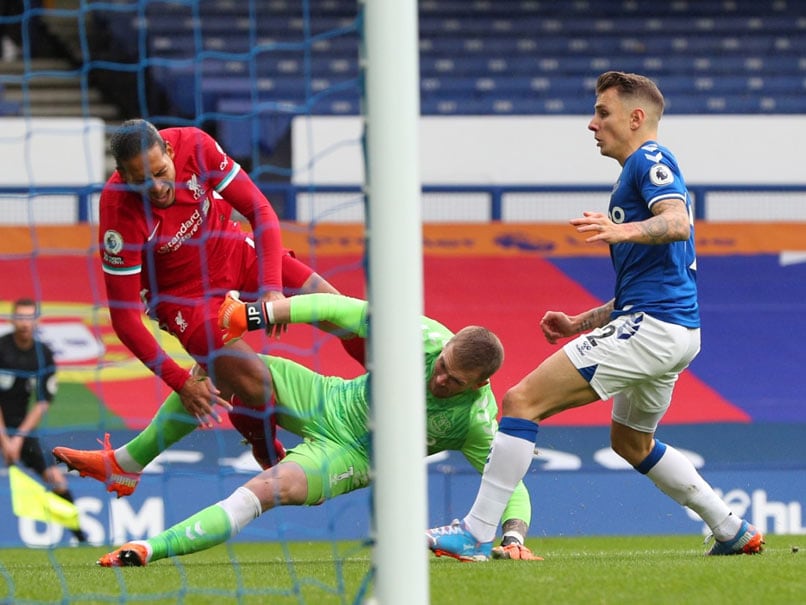 Liverpool's Premier Leaguetitle defence was rocked on Sunday with the news Virgil Van Dijk must undergo knee surgery amid reports the Dutch defender could miss the rest of the season. Van Dijk hobbled off after a shocking challenge from Everton goalkeeper Jordan Pickford in a 2-2 draw in the Merseyside derby on Saturday. "The centre-back damaged knee ligaments following an incident involving Blues goalkeeper Jordan Pickford after six minutes at Goodison Park," Liverpool said in a statement.

"Van Dijk was required to be substituted and further assessment on the injury has revealed an operation will be needed.

"No specific timescale is being placed upon his return to action at this stage."

Van Dijk has been pivotal to Liverpool's resurgence under Jurgen Kloppsince making a then world record 75 million pounds move for a defender from Southampton in January 2018.

The 29-year-old has started every league game for the past two seasons as the Reds won the Champions League in 2019 and ended a 30-year wait to win a league title earlier this year.

"Virgil played for us I don't know how many games in a row. He plays with pain, he plays with pretty much everything, but he couldn't play on. That's not good," said Klopp.

Prior to Van Dijk's arrival, Klopp's time at Anfield had been beset by defensive collapses.

Now the German must find a solution to the huge hole left in his defence without the chance to dip into the transfer market with the window not open again until January.

There are parallels with the serious knee injury that Manchester City centre-back Aymeric Laporte suffered at the start of last season.

Without the Frenchman, City's title defence imploded paving the way for Liverpool to cruise to the league by 18 points.

Van Dijk's absence is compounded by goalkeeper Alisson Becker also being sidelined by a shoulder injury.

Without the Brazilian in goal, Klopp's men have conceded nine times in their last two matches, including a historic 7-2 humiliation as Aston Villa two weeks ago.

The loss of Van Dijk's dominant aerial presence was obvious as Everton scored twice from headers to come from behind in a contentious derby at Goodison Park.

England international Pickford somehow escaped punishment for his dangerous lunge into Van Dijk's knee as the two collided at the back post.

Liverpool have reportedly asked the Premier League for clarification on the use of VAR as not only was Pickford not dismissed, but Jordan Henderson's late winner was ruled out for a dubious offside against Sadio Mane on review.

Klopp was also not happy with another reckless Everton challenge that earned Richarlison a straight red card for taking out Thiago Alcantara.

The Spanish international was able to complete the game, but has also been sent for scans to discover the extent of a knee injury.

"When I left the pitch, Thiago told me in the red card situation with Richarlison he thinks he got injured," Klopp added.

"We will see if it's true or not, but if he felt like this then we need to have a look."

Everton Virgil Van Dijk Jordan Pickford English Premier League Football Jurgen Klopp
Get the latest updates on IPL Auction 2023 and check out  IPL 2023 and Live Cricket Score. Like us on Facebook or follow us on Twitter for more sports updates. You can also download the NDTV Cricket app for Android or iOS.