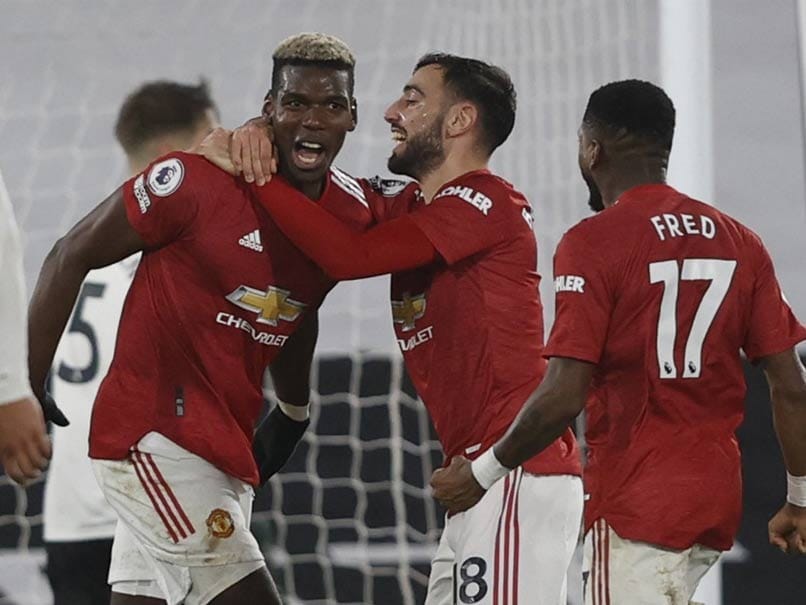 Manchester United moved back to the top of the Premier League table after their win over Fulham.© AFP

Paul Pogba produced a moment of magic as Manchester Unitedcame from behind to beat Fulham 2-1 and reclaim the Premier League lead on Wednesday, ending Manchester City's short stay at the top. Ole Gunnar Solskjaer's in-form team started the match third in the table after 24 hours of chopping and changing at the summit. The win sent the Red Devils two points clear and equalled the club record of 17 Premier League away games without defeat set by the treble-winning side of 1999. United were forced to dig deep after Ademola Lookman punished them for an untidy start before Edinson Cavanipulled them level with a poacher's goal later in the first half. Pogba -- back in the starting line-up in recent weeks after a spell on the periphery of Solskjaer's team -- put United in front with a stunning left-foot curling effort from outside the area in the second half.

United have now won seven Premier League games after going behind this season.

"Fantastic goal by Paul and we had some other chances to finish the game but of course when it is just one goal, and the players they put on, it is going to be like heart in your mouth," Solskjaer told BT Sport.

But the Norwegian refused to be drawn on a title challenge, even though United are top at the halfway point of the season.

"It is always going to be talked about when you are halfway through and top of the league but we are not thinking about this," he added. "We just have to go one game at a time. It is such an unpredictable season."

The Premier League race is shaping up to be a thriller, with just eight points separating United from seventh-placed West Ham.

United knew they had to respond after City beat Aston Villa 2-0 earlier on Wednesday to leapfrog Leicester, who topped the table after their 2-0 win against Chelsea the previous evening.

But the defensive discipline they showed in their goalless draw against Liverpool on Sunday was absent in the early minutes and they paid the price.

United were punished in the fifth minute when Lookman sprang the offside trap, collecting a ball over the top from Andre-Frank Zambo Anguissa.

The forward had time to pick his spot and gave Manchester United goalkeeper David de Gea no chance, striking the ball into the bottom corner with his right foot.

The away side settled and were level in the 21st minute through Cavani, moments after Bruno Fernandes had hit the inside of the post.

Fulham goalkeeper Alphonse Areola failed to hold a Fernandes cross from the left, spilling the ball into the path of the veteran Uruguayan, who made no mistake with a left-footed finish from close range.

The increasingly influential Fernandes tested Areola from distance as United began to flex their muscles without creating many clear-cut chances.

Fulham made a bright start to the second period as United again struggled to find openings.

But in the 65th minute Pogba broke the deadlock, creating space before producing an unstoppable drive past a diving Areola.

The Frenchman said he had been "really mad" after failing to convert a late chance against Liverpool.

"It was a beautiful goal and beautiful win," he said. "It wasn't my favourite goal ever but it was still beautiful."

As the second half wore on, United faced some nervy moments.

De Gea was forced to make a smart save with his legs from Ruben Loftus-Cheek, who blasted another chance over the bar.

And United had their hearts in their mouths when Aleksandar Mitrovic's header deflected off Eric Bailly and inches wide of the post deep into time added on.

Defeat for Fulham leaves them third from bottom, four points from safety.

Paul Pogba Edinson Cavani English Premier League Football
Get the latest updates on IPL Auction 2023 and check out  IPL 2023 and Live Cricket Score. Like us on Facebook or follow us on Twitter for more sports updates. You can also download the NDTV Cricket app for Android or iOS.