Leon Osman and Steven Naismith scored the goals as Everton fought back from two goals down to draw 2-2 in an engaging Merseyside derby with Liverpool on Sunday. 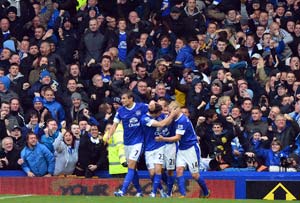 Leon Osman and Steven Naismith scored the goals as Everton fought back from two goals down to draw 2-2 in an engaging Merseyside derby with Liverpool on Sunday.

The visitors took an early advantage through a Leighton Baines own goal, which saw Luis Suarez, who had been criticised for diving by David Moyes before the match, run half the length of the pitch to dive on the ground in front of the Everton manager.

Suarez then headed Liverpool 2-0 up but Osman pulled one back just two minutes later before former Rangers forward Naismith pulled the hosts level with his first Everton goal.

The 219th derby produced a pulsating opening period that the second half failed to live up to and left Liverpool six points behind their old rivals, with Suarez's antics sure to dominate the fall-out.

Both managers had called for a strong performance from referee Andre Marriner, and he showed eight yellow cards on a contentious afternoon at Goodison Park.

Liverpool suffered some pre-match problems when Pepe Reina was deemed unready to return from his hamstring problem and Glen Johnson also failed to make the starting line-up due to injury.

Australian Brad Jones, who had filled in for Reina in the previous two matches, looked uncomfortable in dealing with an early Kevin Mirallas corner but Liverpool moved ahead after 13 minutes.

Johnson's replacement, Jose Enrique, made a fine burst down the left flank and although Baines prevented Raheem Sterling from tapping in at the far post, the England defender then turned Suarez's shot into his own net.

Uruguayan Suarez produced a controversial celebration by diving to the ground in front of Moyes.

Seven minutes later the visitors doubled their advantage when Steven Gerrard clipped a free-kick into the area and Suarez glanced a header into the corner of the net.

Everton looked for a quick response and Marouane Fellaini's drive was deflected wide.

And Moyes' side pulled level just two minutes after falling two goals behind when Jones could only produce a poor punch at a Baines corner and Osman found the net from the edge of the area.

Suarez still looked a constant threat and after receiving a throw from Andre Wisdom the Uruguayan thumped a shot past the post.

But 10 minutes before the break, Everton pulled level when Fellaini's cross was allowed to travel across the Liverpool area and Naismith stabbed in from close range.

After their dreadful start, Everton looked strong and Jones did well to push away a cross from Mirallas, while Seamus Coleman also drove over the bar from just outside the area.

Liverpool manager Brendan Rogers made two changes at the interval, replacing Suso and Nuri Sahin with Jonjo Shelvey and Sebastian Coates, while the outstanding Mirallas had to be brought off for Magaye Gueye due to injury.

Sterling should have restored the visitors' advantage when he raced past Phil Jagielka to collect Enrique's return pass, but the 17-year-old's shot squirmed wide.

Nikica Jelavic had his first sight of goal when he cut in from the left and had a low shot pushed away at the near post by Jones.

Everton's American goalkeeper Tim Howard pushed away a Gerrard free-kick that skidded off the turf and at the other end, Jelavic glanced a header wide from a Baines free-kick.

The match finished scrappily, but there was drama in added time when Suarez toed the ball into the net, only for the goal to be ruled out for offside.