Ederson's stopped Luka Milivojevic's late penalty to save Manchester City from defeat on Sunday but a 0-0 draw at Crystal Palace brought the Premier League leaders' record-breaking 18 match winning run to an end. 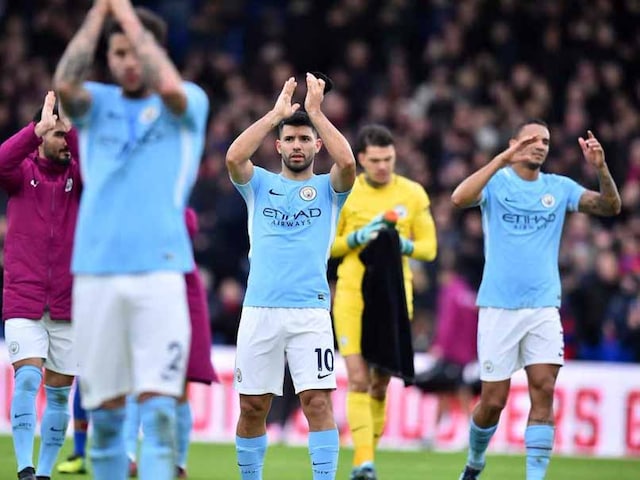 A 0-0 draw at Palace brought the EPL leaders' record-breaking 18 match winning run to an end.© AFP

Ederson's stopped Luka Milivojevic's late penalty to save Manchester City from defeat on Sunday but a 0-0 draw at Crystal Palace brought the Premier League leaders' record-breaking 18 match winning run to an end. Milivojevic was presented with the chance to seal a memorable victory for Roy Hodgson's relegation-threatened side when Wilfried Zaha was brought down by Raheem Sterling in the 90th minute. But the Palace winger struck his spot-kick too close to Ederson, allowing the City keeper to preserve his side's 21-game unbeaten start to the league campaign. However, City's failure to score in a league game for the first time since last April meant they fell short in their bid to equal Bayern Munich 19-game winning run of four years ago, the longest in Europe's five major leagues.

And City's afternoon was further soured when Kevin De Bruyne was stretchered off with what appeared to be a serious looking injury immediately after the spot-kick following an ugly challenge by Palace substitute Jason Puncheon.

Hodgson claimed before the game there was "no magic formula" to competing with City, insisting his Palace side's hopes of getting something from the game hinged on working hard, and defending well while maintaining an attacking threat.

The manager could be satisfied that during the opening 45 minutes his players stuck to the prescribed plan to the extent that by the half-time break, the frustration among Guardiola's players was plain to see.

City had started well enough, piecing together a series of fluent early moves that suggested the home defence would face a long and testing afternoon.

However, there was an early sign the visitors might not be at their best when a breakdown in communication between Eliaquim Mangala and Ederson led to the keeper directing an attempted clearance against his centre-back, presenting Christian Benteke with an early opportunity.

Mangala recovered to deflect the striker's shot away to safety but the mix-up was the first of too many for the league leaders during the first half.

Both sides were forced into early changes with Palace captain Scott Dann being stretchered off after in the 19th minute and City striker Gabriel Jesus following shortly after with what appeared to be groin problem.

The subsequent reshuffle appeared to affect the visitors more, with Palace growing more into the game the longer the half went on.

Sergio Aguero, Jesus's replacement, struck the post in the 28th minute with a deflected shot from the edge of the penalty area but that proved to be a rare moment of concern for home keeper Wayne Hennessey.

And while Palace were unable to carve out many clear chances at the other end, Wilfried Zaha was a constant threat down the Palace left, frequently getting the better of City right-back Kyle Walker.

An animated conversation between De Bruyne and Leroy Sane confirmed the sense that City were growing increasingly uncomfortable and Sane -- who was particularly ineffective -- received a yellow card on the stroke of half-time when he kicked the ball away in frustration after being caught offside.

Palace had adopted a very different approach to that pursued by Newcastle, City previous opponents, before the break.

But they found it far harder to be as expansive after the restart when City finally began to move through the gears.

Benteke grew more isolated up front and Zaha found he had less space to work with as City pressed forward and began to give Hennessey the busy afternoon he would have anticipated.

The keeper, though, proved up to the task and never more so that when he positioned himself well to block Sane's close range volley at the far post.

De Bruyne shot straight at Hennessey and then saw an effort blocked by Martin Kelly but, despite dominating possession, City struggled to find openings in a well-drilled Palace backline.

And they should have entered the final 14 minutes of the game needing a goal to get back on level terms after Andros Townsend missed the home side's best chance of the half before Milivojevic was handed his late chance to clinch the points.

Comments
Topics mentioned in this article
Manchester City Crystal Palace Luka Milivojevic Raheem Sterling Kevin De Bruyne English Premier League Football
Get the latest Cricket news, check out the India cricket schedule, Cricket live score . Like us on Facebook or follow us on Twitter for more sports updates. You can also download the NDTV Cricket app for Android or iOS.