Berbatov was undergoing a medical in the final formalities before a transfer that ends a saga over the Bulgarian's future, with him initially set to join Italian side Fiorentina.

The 31-year-old moved to United in 2008 for over £30 million ($47 million) from a Tottenham side then managed by Jol and could now be reunited with the Dutchman, becoming the fourth summer signing at Craven Cottage.

Fulham were desperate to bolster their squad after losing Mousa Dembele to Spurs this week and with striker Clint Dempsey also determined to leave the club, Berbatov's capture will come as a relief to Jol.

The manager dismissed claims he was re-investing the reported fee of £15 million from the sale of Dembele, saying money was already available.

"As I said last week we are a healthy club, we didn't just need the Dembele money to spend before," he said.

"Of course you have to pay good players good money but I think we have made steps over the last few years and there have been many clubs interested in Dimitar.

"Maybe you saw a few things on the Internet, they all tried to get him but we were able and capable of getting him. Hopefully everything is good and that means we are doing the business."

Berbatov has slipped out of contention at United. He made just 12 league appearances last season, scoring seven goals, a fall from grace for a player who a year earlier was the Premier League's equal top scorer.

Fiorentina's failure to sign him led the Serie A side to hit out at Italian champions Juventus for alleged interference. 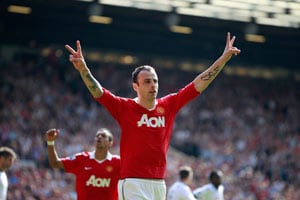 Berbatov had been expected to join Fiorentina on Thursday, but some last-minute intervention by Juventus appears to have prompted him to change his mind and remain in England.

Fiorentina had agreed terms with Berbatov and paid for his plane ticket to the city, but club bosses were furious he did not show up and hit out at the "companies" who they believe scuppered the deal.

A statement from Fiorentina issued late Wednesday said the deal had "fallen through after an agreement had been reached with Manchester United... and after it had agreed contract terms with the player."

It added: "During the day (Wednesday) the English club granted permission for the player to travel to Florence for a medical and to sign the contract.

"(We thought) the player had embarked, accompanied by his lawyer on a flight - tickets paid for by Fiorentina - to Florence.

"But the player never arrived in Florence... because of the reckless and arrogant attitude of other companies which belie the values of honesty, fair play and ethics of sport."

Juventus director general Giuseppe Marotta insisted his club's actions had been above board.

"We behaved in a correct manner and with maximum transparency," Marotta said in quotes carried by La Gazzetta dello Sport newspaper.