Chelsea were 3-0 down in the first half, but came back strong to salvage a point thanks to goals from Mason Mount, Callum Hudson-Odoi and Tammy Abraham. 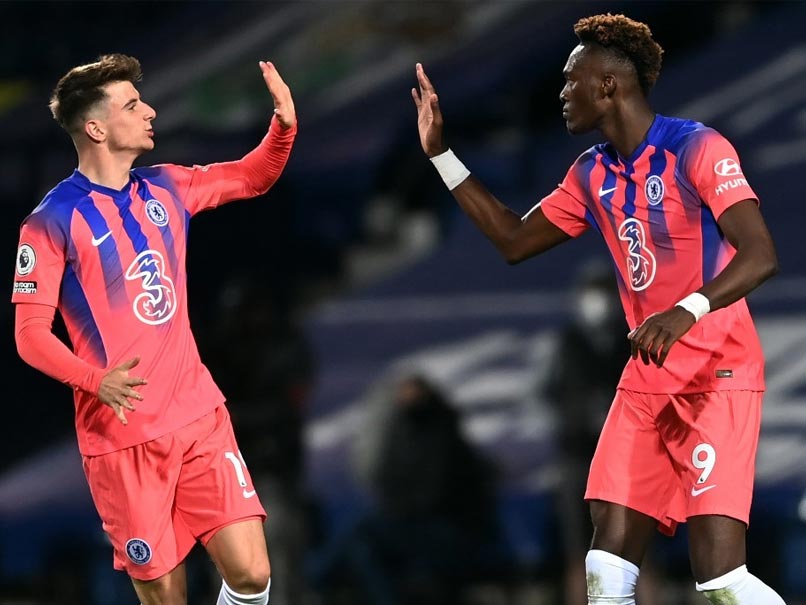 Tammy Abraham scored in added time to rescue a point for Chelsea.© AFP

Free-spending Chelsea came from 3-0 down to salvage a 3-3 draw at newly-promoted West Brom, while Manchester United were rescued by Bruno Fernandes's 100th-minute penalty, awarded after the full-time whistle, to beat Brighton 3-2 on Saturday. But it is Everton who are setting the early pace in the Premier League as they secured a third straight win in controversial circumstances, 2-1 at Crystal Palace.

Chelsea manager Frank Lampard handed the captain's armband to Thiago Silva on his Premier League debut, but the Brazilian had a nightmare first 45 minutes as the Blues' defensive deficiencies were easily exposed.

Callum Robison pounced on errors from Marcos Alonso and Silva to fire twice beyond Willy Caballero, who replaced Kepa Arrizabalaga in the Chelsea goal.

Kyle Bartley then made it 3-0 to the Baggies, who had lost their opening two games back in the top flight.

Chelsea have spent a reported 220 million pounds ($280 million) to try and close the gap to Liverpool and Manchester City in the title race and even a spirited second-half fightback could not hide the embarrassment of his side's defending for Lampard, who have taken just four points from their first three games.

Mason Mount got the comeback started to a swerving long-range effort.

Substitute Callum Hudson-Odoi then swept home 20 minutes from time after a neat one-two with Kai Havertz.

And Tammy Abraham secured a point in stoppage time when he rolled in the rebound after Sam Johnstone had parried Mount's initial effort.

Man Utd "get away with it"

United bounced back from their 3-1 home defeat to Palace last weekend, but had a lot of fortune on their side after being outplayed by Brighton.

The Seagulls hit the woodwork five times and thought they had earned a point themselves five minutes into stoppage time when Solly March headed home at the back post.

However, there just enough time for United to mount another attack and Neal Maupay raised his arm to block Harry Maguire's header.

Referee Chris Kavanagh initially blew for full-time, but then awarded a penalty after consulting the pitchside monitor and Fernandes confidently converted.

"We got away with one. Maybe one point we deserved, we didn't deserve more," admitted United boss Ole Gunnar Solskjaer.

After Leandro Trossard hit both posts with shots from outside the box, while Adam Webster's looping header came back off the crossbar, Brighton finally got their reward when Fernandes clipped Tariq Lamptey inside the box and Maupay cheekily chipped his penalty down the middle of the goal.

March hit the post before Trossard's unfortunate hat-trick was complete when he smashed off the bar.

And even once they did level, Brighton were denied a point in a chaotic finale.

"Sometimes life isn't fair and it feels like that at the moment," said Potter. "The performance level was amazing from us, I'm so proud of the players. It's a sore one.

Everton sit top of the embryonic table as they won the battle of two sides who started the day with a perfect record thanks to a controversial penalty on their own.

James Rodriguez again starred for Carlo Ancelotti's men and played his part in Everton's opener, converted by Dominic Calvert-Lewin for already his fifth Premier League goal of the season.

Palace quickly responded through Cheikhou Kouyate, but the game was decided by a VAR review five minutes before half-time.

After consulting the pitchside monitor, Kevin Friend pointed to the spot for handball by Joel Ward after he was struck on the arm by Lucas Digne's header and Richarlison converted the spot-kick.

"I have despair about a rule that I believe is ruining the game of football," said Palace boss Roy Hodgson.

Crystal Palace Thiago Silva James Rodriguez Dominic Calvert-Lewin Football
Get the latest updates on SA vs IND 2021-22, check out the Schedule and Live Score . Like us on Facebook or follow us on Twitter for more sports updates. You can also download the NDTV Cricket app for Android or iOS.