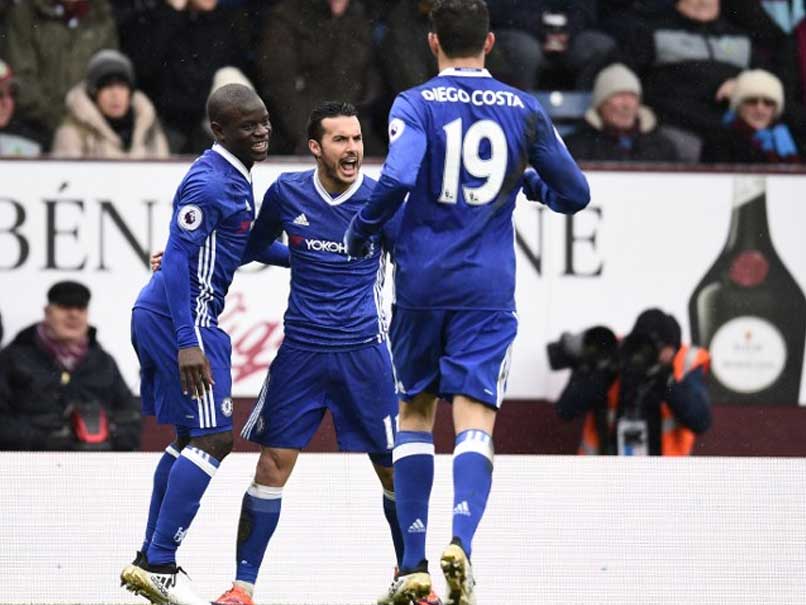 Chelsea drew 1-1 against Burnley in the Premier League on Sunday.© AFP

Chelsea extended their lead atop the Premier League to 10 points on Sunday as the team they seem destined to succeed as champions, Leicester City, sank to yet another defeat. Bidding to go 12 points clear, Chelsea had to settle for a point after home debutant Robbie Brady's arcing 24th-minute free-kick earned Burnley a deserved 1-1 draw at Turf Moor. While the title beckons for Chelsea, it is receding deeper into memory for Leicester, who were left one point and one place above the relegation zone by a 2-0 defeat at Swansea City.

Leicester became the first English champions to lose five successive games since Chelsea in 1956 and the first team to go six games without scoring at the start of the year since Stoke City in 1985.

Swansea overcame the loss of former Leicester loanee Nathan Dyer to an early ankle injury to score twice in the latter stages of the first half at the Liberty Stadium.

Centre-back Alfie Mawson broke the deadlock in the 36th minute with an emphatic volley after Federico Fernandez had nodded Robert Huth's clearing header back into the penalty area.

Swedish left-back Martin Olsson landed a hammer blow in first-half stoppage time when he hared onto Gylfi Sigurdsson's first-time pass to rifle a shot past Schmeichel at his near post.

Ranieri made a double change at half-time, sending on Ben Chilwell and Islam Slimani, but the closest they came to establishing a foothold was a shot from the latter that was blocked by Lukasz Fabianski.

Swansea manager Paul Clement, named the Premier League's Manager of the Month for January, has now seen his team win four games from six since his appointment as the successor to Bob Bradley.

They pulled four points clear of danger and now have a full two weeks to prepare for their trip to leaders Chelsea.

Chelsea continue to sit pretty at the top of the pile, although their advantage will be eroded to eight points if Pep Guardiola's Manchester City win at Bournemouth on Monday.

Antonio Conte's side took a seventh-minute lead at Turf Moor when Victor Moses slipped Pedro in to steer a low shot past Burnley goalkeeper Tom Heaton.

But Burnley levelled through £13 million ($16.2 million, 15.3 million euros) record signing Brady's fine free-kick and managed to prevent Chelsea from registering a single shot on target in the second half.

"We must be disappointed at the point because I think this type of game we could win," said Chelsea manager Conte.

"We know there is a long way (to the end of the season). It is important to work and play this type of game and fight."

Burnley manager Sean Dyche, whose side have won 29 of their 30 points at home, said: "It was a strong performance against a top, top side.

"I want us to be awkward to play against and be productive and we showed that."

Comments
Topics mentioned in this article
Chelsea Burnley Swansea City Leicester City English Premier League Football
Get the latest updates on IPL Auction 2023 and check out  IPL 2023 and Live Cricket Score. Like us on Facebook or follow us on Twitter for more sports updates. You can also download the NDTV Cricket app for Android or iOS.