Carlos Tevez gets warm welcome from Juventus and fans

Juventus released a statement late Wednesday saying that Tevez had agreed to a three-year deal and that he will be presented Thursday after completing a medical exam. Italian media reported that the deal is worth 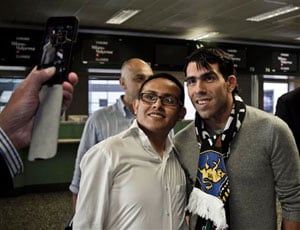 Carlos Tevez received a warm welcome from Juventus fans upon his arrival in Italy on Wednesday, and he only needs to pass a medical before joining the club officially.

Hundreds of fans swarmed around the Argentina forward when he landed at Milan's Malpensa airport and more supporters waited for his arrival at Juventus headquarters in Turin.

"I'm very happy to be with Juventus, it's very satisfying," Tevez told reporters before entering the Juve offices. "Juve was the club that wanted me most."

Juventus also showed how much Tevez means to the club by announcing that the striker will wear Alessandro Del Piero's old No. 10 shirt, which Tevez promptly displayed from a balcony.

Del Piero left Juventus a year ago after 19 seasons with the club.

"We needed all this enthusiasm," Juventus CEO Giuseppe Marotta said.

Manchester City agreed on Tuesday to sell Tevez to Juve in a transfer worth up to 12 million pounds ($18.5 million) with bonuses.

Juventus released a statement late Wednesday saying that Tevez had agreed to a three-year deal and that he will be presented Thursday after completing a medical exam.

Italian media reported that the deal is worth 5.5 million ($7.2 million).

While Juventus has won Serie A for the past two seasons, it has done so without a top forward, scoring by committee instead with the likes of Mirko Vucinic, Sebastian Giovinco, Alessandro Matri and Fabio Quagliarella.

Vucinic and midfielder Arturo Vidal led the club with 10 Serie A goals each this past season, Quagliarella had nine, Matri eight and Giovinco seven.

Tevez is expected to become Juve's focus in attack and help the squad in its stated goal of improving its performance in the Champions League. Juventus was eliminated from Europe in the quarterfinals in April by eventual champion Bayern Munich, losing 4-0 on aggregate.

The hard-working Tevez joined City in 2009 after leaving local rival Manchester United and played an integral role in the club's rise as a Premier League force, eventually becoming its captain.

He helped City end its trophy drought by winning the FA Cup in 2011, with the Premier League title arriving the following season.

Tevez's four-year spell at the club will forever be remembered, however, by his refusal to come on as a substitute in a Champions League match at Bayern Munich in September 2011, sparking a major fallout with then-manager Roberto Mancini.

The move to Juve ends Tevez's seven-year stint in English football after first moving to the Premier League in 2006 to join West Ham.